If the yarn world were football, the New York Sheep and Wool Festival would be homecoming. The event, begun in 1980, is lovingly referred to by the town in which it takes place: Rhinebeck. 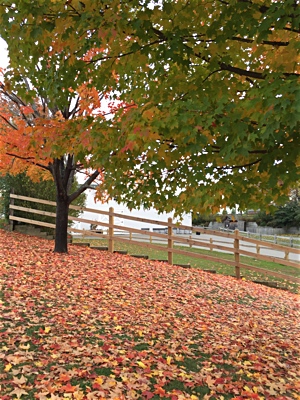 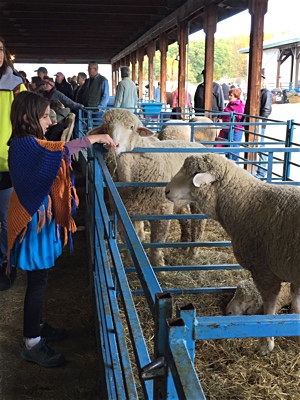 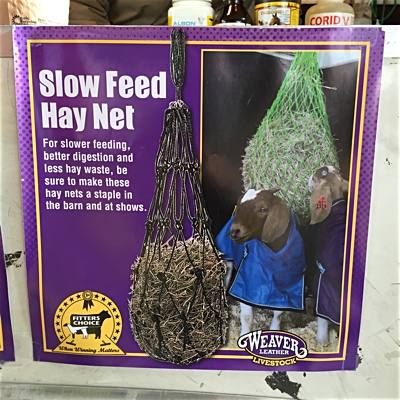 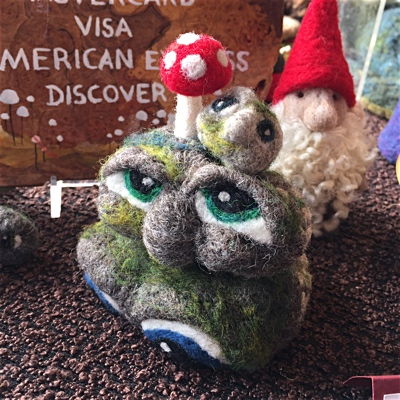 I was there to be with friends and sign advance copies of my next book Knitlandia: A Knitter Sees the World. The book tells stories of our most beloved institutions and rituals, including Rhinebeck, meaning that people could pick up a copy of the book and read about Rhinebeck while at Rhinebeck. 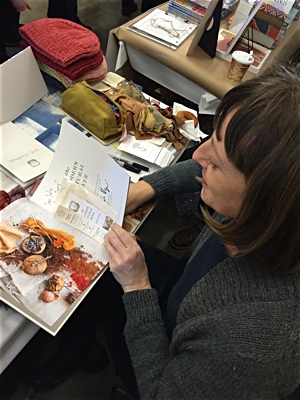 I shared my signing table with Kristine Vejar, who was making her book tour debut to promote The Modern Natural Dyer. I watched in awe as she not only signed each book but adorned it with a custom bookplate and naturally dyed fabric bookmark. No wonder she sold out of books. 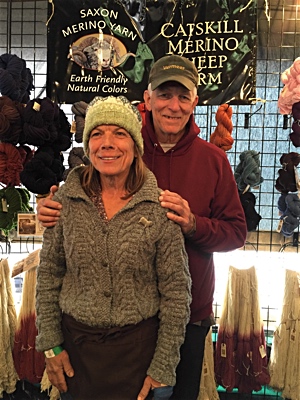 Vending for the first time—although in business nearly as long as the festival itself—was Catskill Merino. If the name sounds familiar, Catskill Merino is Eugene Wyatt’s farm, and Eugene is the farmer whose fibers made up my Great White Bale yarn adventure. You could say that Clara Yarn wouldn’t exist if it weren’t for Eugene.

Dominique, the early-rising shepherd to Eugene’s night owl, was also there. She was excited (as was I) by their new color experiment. 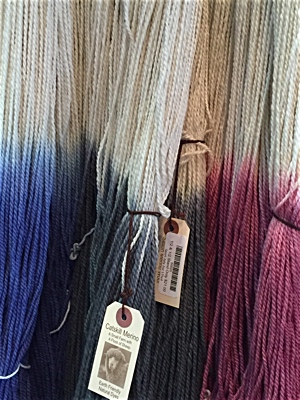 They’re dip-dyeing only half a skein. I’ve long loved any yarn that plays with white space rather than forcing color onto every square inch. By dyeing half the skein, they ensure that a specific color (including the slight changes in hue at the beginning and end of that color) will drift in and out of your work at regular intervals. Change the diameter of what you’re knitting, and the stripe pattern will change too. It’s almost a color version of Ceceilia Campochiaro’s Sequence Knitting concept. (She, too, was in the author area signing copies of her book.)

Eugene’s flock consists primarily of Saxon Merino sheep. Other breeds were well-represented too, including Cormo from Foxfire Fiber and Foxhill Farm (no Website but you can contact Alice Field at P.O. Box 6, 380 Maple St., Lee, MA, 01238); Merino from Greenwood Hill Farm; and an assortment of breed-specific solos and blends from Dashing Star Farm. 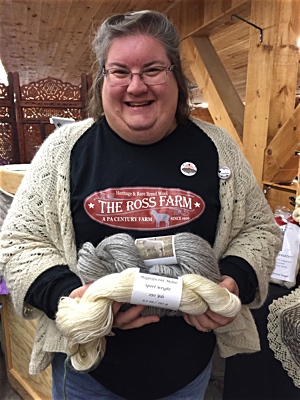 But I was particularly struck by The Ross Farm’s offerings. Not only could you find a wide range of expertly spun breed-specific yarns, but you could trace the source of your skein back to the precise sheep that had provided its fibers, with its name and photo on each skein. This is Amy. Her family has been farming the same land in Washington County, PA, since 1910. Her focus on what she calls “heritage breeds”—along with a keen eye for twist and ply—bodes well for her generation and beyond. 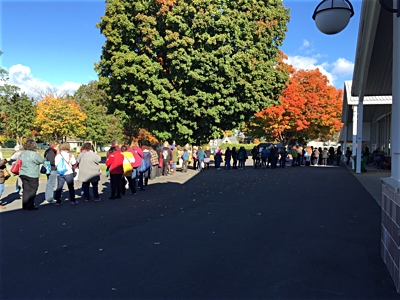 Rhinebeck is a festival of lines. You line up to get in, and after running to your vendor of choice, you stand in line to make that first purchase. Then you stand in line for your next vendor, or for food, or for the restrooms, pretty much all day. This was the line for Miss Babs Yarns, which allegedly took several hours to get through. Other daunting lines were spotted at Briar Rose, Jennie the Potter (who was sharing a booth with another high-line vendor Indigo Dragonfly), Fiber Optic Yarns, and Spirit Trail Fiberworks. 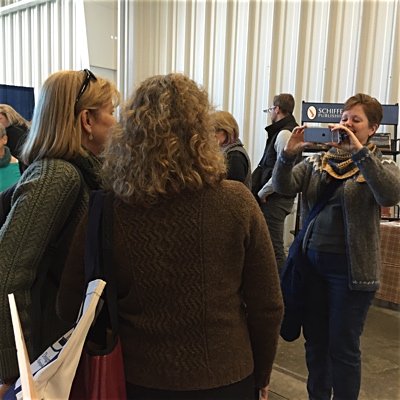 Rhinebeck is also the place to show off your latest handknit, a fact aided this year by very cold weather and even snow flurries on Sunday. Stephanie Pearl-McPhee pulled off a heroic finish to her own Rhinebeck sweater (Reverb in Clara Yarn Shetland 1.0), not only wearing it but happily posing in pictures with other knitters. 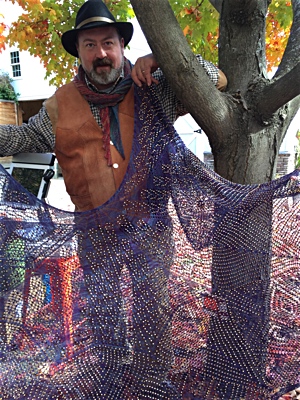 Meanwhile Ron and Theresa Miskin drove their truck, Betsy, all the way from Texas to New York for the show. After I browsed their Buffalo Wool Co.yarns, hats, gloves, and apparel, Ron pulled me aside to show me this masterpiece. Knit by Lynette Meek, it contains—get ready—20,000 gold beads. I’m not talking gold-colored beads, but beads actually dipped in gold. I’ll pause to let that sink in. 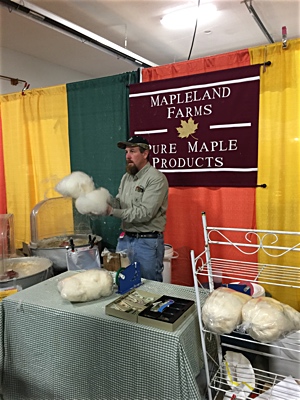 In the afternoon, as it got colder and my energy started to flag, I slipped into a space that makes Rhinebeck unique from any other show I’ve attended: the food building. I’m not talking about corn dogs and soda, but actual artisanal food from local vendors.

You can find wines and cheeses, breads, cupcakes, honey, jams, jellies, and most delicious of all, maple cotton candy. It was hard not to feel guilty when I reached the sheep-to-shawl contest going on in the other side of the barn. As I lingered, lazily savoring my candy, several teams industriously transformed wool into beautiful woven objects. 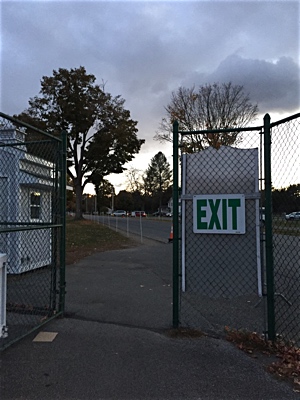 All too soon the light faded and the bewitching hour arrived. At 5pm sharp, vendors began dismantling their booths. Fairground staff requires that everyone get out within just a few hours. I took my yarn, my candy, and a head full of memories that would carry me through winter and into the new year.