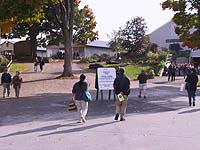 The year was 2003. My high-school buddy Theresa flew from California to Maine and we road-tripped it down the coast to witness this legendary festival for ourselves. I was there to report on this show for my fledgling site, Knitter’s Review, just three years old then.

From an Internet standpoint, this was still just a few years past the Stone Age. Few vendors even had websites yet, and my pitch (“I publish an online knitting magazine about yarn…”) fell on flat ears. There was no Ravelry, no Instagram, Twitter, or Facebook. Knitty was barely a year old yet. There were no hashtags, no meet-ups, no Periscope feeds. But there were people, avid knitters and spinners and weavers and tire-kickers alike, all in a state of bliss at being there. And there were animals and vendors and, yes, cider donuts.

We’ve come a long way since 2003. Won’t you join me for a little travel back in time?

Report from the New York State Sheep and Wool Festival

When you assemble thousands of like-spirited people for a weekend of play, amazing things can happen. No, chances are you won’t grow a second nose or find a cure for cancer, but you you may find yourself feeling unexpectedly giddy. This is exactly what happened to me at this year’s New York State Sheep and Wool Festival. 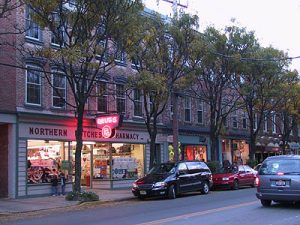 The festival takes place in the picturesque town of Rhinebeck, just north of Poughkeepsie, New York, during the peak fall leaf-peeping season. People often refer to the festival simply as “Rhinebeck.”

Fiber festivals are generally far more than just mobile yarn shops—they offer an exclusive chance to get up close and personal with the actual animals who so generously offer up their fiber to us. Despite its “sheep and wool” nomenclature, Rhinebeck featured all sorts of animals besides sheep, including llamas, alpacas, goats, and rabbits (not to mention a few human beings as well!).

Because this was my first time at the show, I hoped to spend my two days visiting every single vendor booth and chatting with every single animal. On Sunday afternoon I left the show exhausted, chilled to the bone, nursing sore feet, and wondering how I was going to get all my loot home—and I still hadn’t managed to see everything. That’s just how large and well-assembled this festival was. 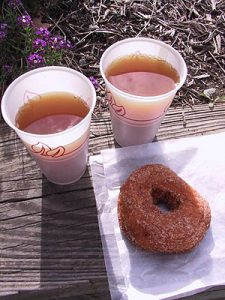 No trip to New York state in October would be complete without a cup of fresh apple cider and a homemade donut. My festival buddy (who flew in from California for the occasion) and I obligingly fortified ourselves with both before heading deeper into the festival grounds on Saturday morning. 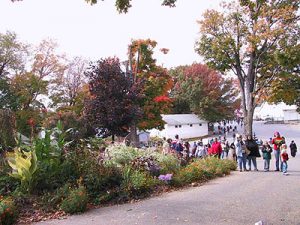 The fairly upscale Dutchess County Fairgrounds provided a beautiful backdrop for the festival, with lush grass that somehow managed to stay green despite constant trampling, and tall trees ablaze with fall color. 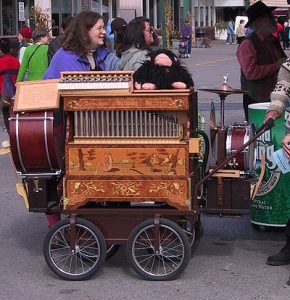 The festival’s 200+ vendors were divided fairly evenly among several permanent buildings, open-sided barns, and freestanding tents. Entertainment was scattered throughout the grounds, including a beautiful hurdy gurdy you see here. The traditional real monkey had been replaced with a stuffed toy.

Before we can knit anything, we have to have fiber—so it makes sense to begin with the animals. Although many were in attendance, the show still had more of a fiber focus than, say, the 4H-heavy Maryland Sheep & Wool Festival. 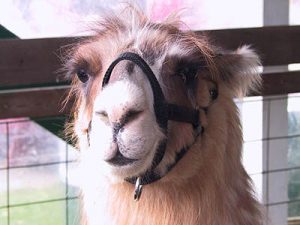 We began at the alpaca barn. It housed several cheerful, curious, and well-tended animals as well as what I must confess was a rather uninspiring array of yarns and fibers that looked nearly identical from one vendor to the next. It led me to wonder if the alpaca market has already reached saturation and, if so, what lies ahead. 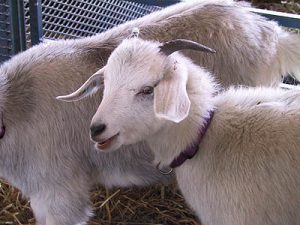 Moving along the chain of precious fibers we arrived at the almighty cashmere goats. A few exquisite specimens were on display including the friendly fellow (or gal?) you see here. 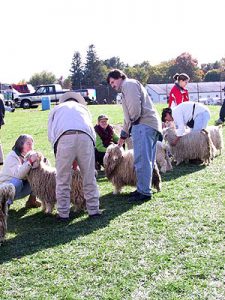 Angora goats were present as well. I watched as several nervous young goats were dragged from their pens—bleating in protest the entire way—to line up in the sunshine and be scrutinized by a judge.

As could be expected, sheep dominated the event. Many breeds were in residence, including merino, Shetland, Rambouillet, and California red, to name just a few.

If your only experience of wool has been at yarn shops, fiber festivals offer a truly mind-expanding experience. By seeing and touching different breeds of sheep, you understand how strongly a sheep’s genetics can influence the yarn you end up knitting. 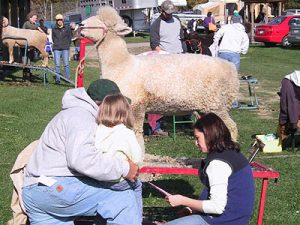 A sheep being groomed 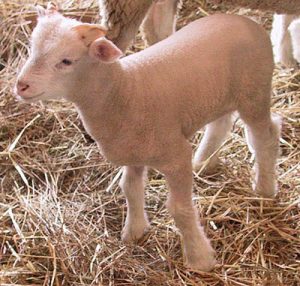 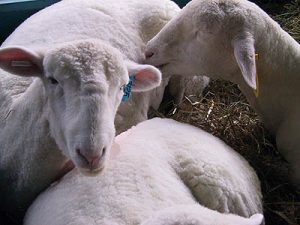 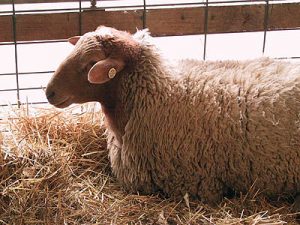 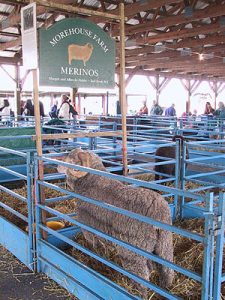 Morehouse Merino was in attendance with two booths (one with mostly lace-weight projects and another with heavier-weight yarns, almost all of which were in kit form) as well as several of its merino sheep on display.

Just two booths down from the main Morehouse Merino booth I discovered Greenwood Hill Farm, which had similar buttery-soft and minimally processed merino but with less vegetable matter and in almost exclusively natural, undyed colors. 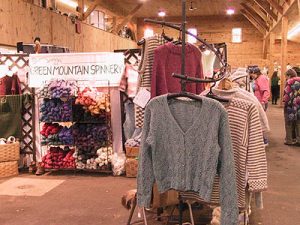 One of my first stops was at the Mostly Merino booth to visit Margaret Klein Wilson, an inspiring and talented woman who recently published The Green Mountain Spinnery Knitting Book: Contemporary and Classic Patterns. 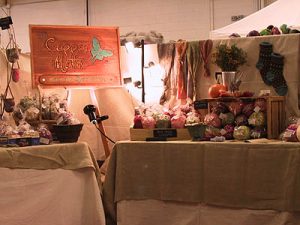 Spinners will appreciate the delicious colors and tidy presentation of The Copper Moth, a New Hampshire-based business that uses natural dyes on silks, silk blends, and select wools. This is one of my very favorite sources, and I was thrilled to meet the owners in person for the first time. [Sadly The Copper Moth is no more.] 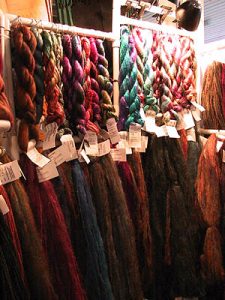 One of the real joys of attending a fiber festival is seeing products that you can’t otherwise find in stores or online. Nancy Finn’s Chasing Rainbows Dyeworks is one such example. Despite her lack of a Web presence or storefront, Nancy has developed a large and loyal following for her truly exquisite hand-dyed fibers and yarns.I was particularly taken with her dyed silk “hankies,” square-shaped layers of silk cocoons that you separate (one by one), elongate, and knit as yarn. I’ll be writing more about this process soon. [Update: Yes! Of course since 2003 they have added a Website.] 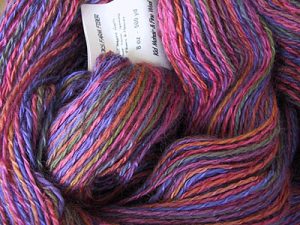 A large hank of Brooks Farm’s Duet (a 55%/45% blend of kid mohair and wool, put up on 500-yard hanks costing $28) made its way home with me. Although Brooks Farm has no Web site or storefront, you can contact owners Randall and Sherry Brooks for color cards and orders by phone or email.

[Update: That last sentence makes me laugh. Indeed, it’s now 2016 and they do have a Website.] 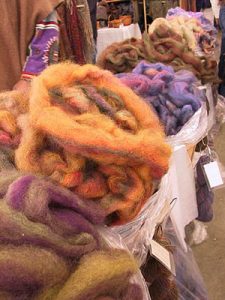 Despite all the new vendors at the show, I couldn’t resist stopping by my perennial favorite, Persimmon Tree Farm. I found barrel after barrel of hand-dyed, hand-blended “clouds” of unspun fiber in rich and complex colorways. Each color and fiber blend is spun into a generous sample hank so you can get a realistic idea of how things will look in yarn form. If you don’t spin (yet!), fear not—there was also an abundance of hand-dyed, home-spun yarns available as well. 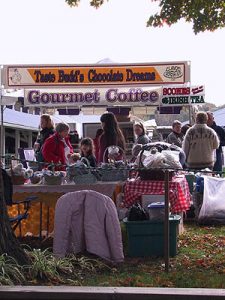 As the weekend progressed, the temps continued to drop, and by Sunday we even had wind and rain. Fortunately, several vendors were on hand to provide warm beverages and fresh-baked chocolate- and butter-laden sweets. 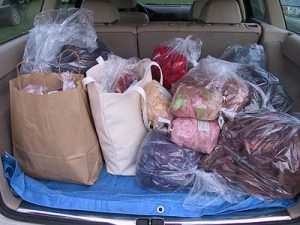 By Sunday afternoon I’d reached a total state of fiber overwhelm. I’d seen enough handknit sweaters and lace shawls and skeins of yarn to last me until next year, so I loaded up the car with my newly acquired stash and began the nine-hour drive home.