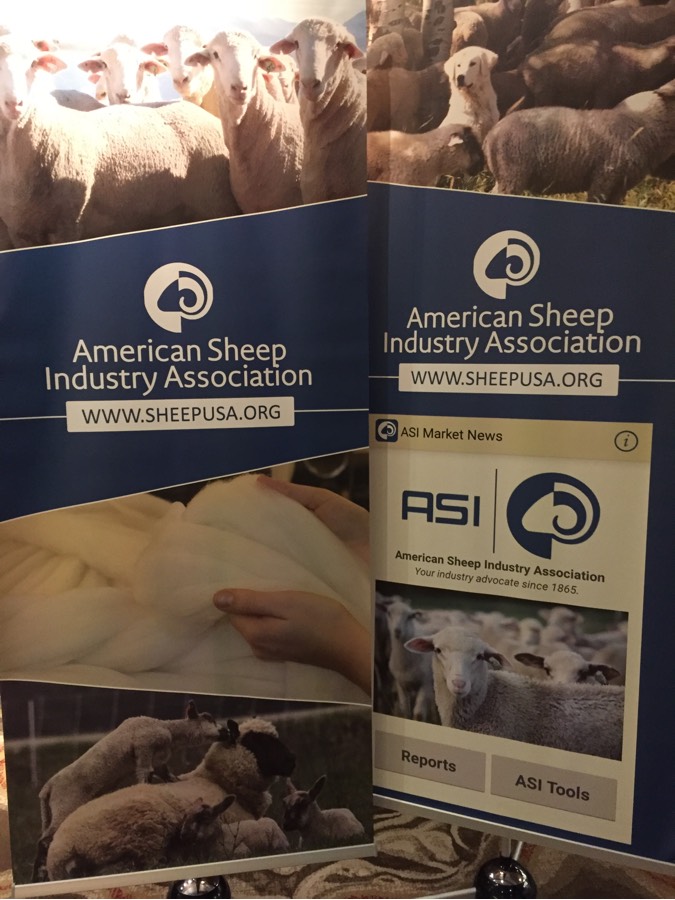 I’ve just returned from the American Sheep Industry Association’s annual conference, which took place in Denver, Colorado. Knitters don’t go to the ASI—at least not for the conference part of the event. The ASI sits way upstream from knitting, in the realm of fields and flocks and factories.

Behind closed doors and with little fanfare sit the people who make our world go round. I met the couple whose Rambouillet fiber goes into Swans Island’s All American Collection. (They awkwardly laughed when I told them they were rock stars in the knitting world.) They were there to learn about the latest veterinary directives and responsible land management practices, to mingle with their wool broker and to chat with other farmers; in short, to find out where the market is trending and how they can best remain a part of it.

Farmers aren’t the only ones in attendance. We heard from shearers and Ph.D.-wielding USDA staff and animal behavior legend Temple Grandin. We had the directors of our two commercial scouring plants, the mill managers, wool marketers, CEOs, and even the man whose company tells you what microns, strength, and fiber length you’re getting. If you’ve bought anything made of American wool, chances are it’s had a trip to his lab.

Unlike knitting conferences, where you tend to pay for individual workshops and then peruse a giant marketplace, at the ASI you pay a set fee to get into the whole thing. There is a marketplace, yes, but it’s very small—perhaps nine vendors, tops—and dedicated to things like ear tags and polypropylene-free bale bags. (Mountain Meadow Wool and Cestari did show this year, but they were mostly pitching their services more than their finished products.) 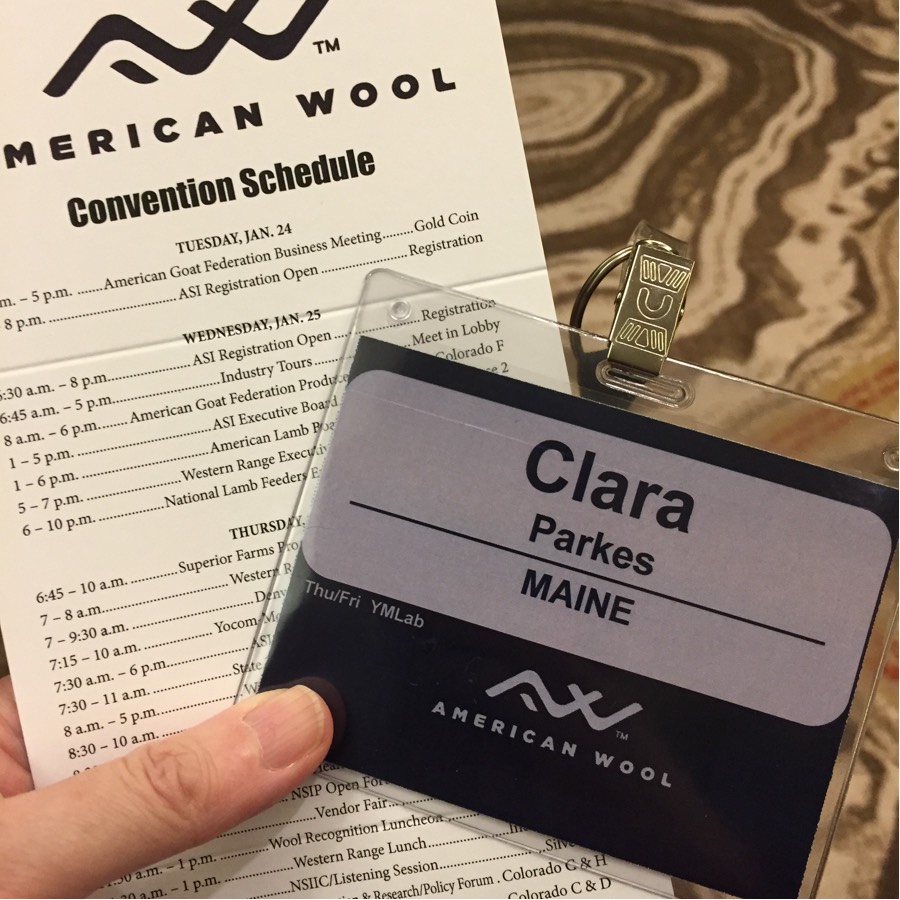 The real action takes place in ongoing meetings and round tables—and, with the exception of a few closed board meetings—your badge will get you into almost everything. You could sit in on the National Lamb Feeders Annual Meeting & Feeder Forum, the National Sheep Improvement Program Open Forum, the Production, Education & Research Council Policy Forums, or perhaps the ASI Wool Council meeting, to name just a few.

It’s sheep and wool geekery to the max. Knitters go through a lot of wool each year, and we’re showing an increased appreciation for American wool. For you, I’ve condensed the conference into five salient points to keep in mind as we all follow the wool.

As appealing as the “buy local” movement is, the American wool industry simply would not be able to exist were it not for international exports. The reason? We don’t have the infrastructure to process and spin all the wool grown in this country.

China is our biggest buyer, purchasing some 42% of the United State’s annual clip. (“It’s not helpful for us to enter a trade war,” said one speaker.) And even with 42% of our wool going to China, we aren’t their biggest supplier, either. According to Kitty Gu, the woman responsible for getting American wool into the Chinese market, China consumes 39% of all wool in the world, of which 70% comes from Australia. (As Burlington WorldWide’s Ashley Bullock put it, “They’ve been buying hot ‘n’ heavy.”) Even though China now has some 1,000 wool-related enterprises, Kitty noted that textiles are still considered a “sunrise industry,” an industry on the rise.

Our next biggest textiles trade partner is India, which purchases some 25% of our clip. But, especially with the fall of the TPP agreement, all eyes are currently on Ethiopia as the next major textile production hub. 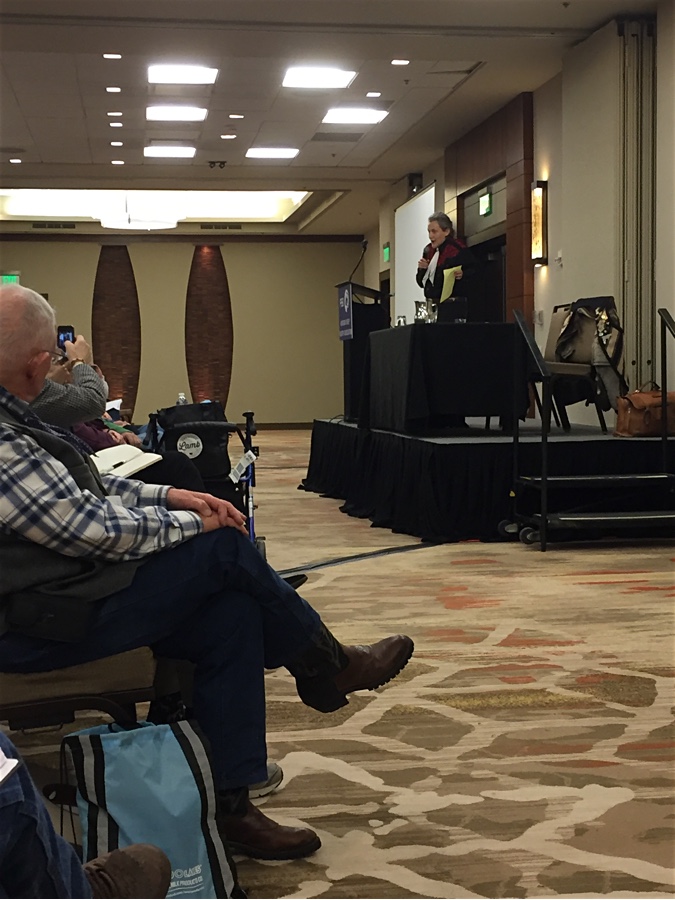 Which was an interesting term to describe the still-rippling impact of a controversial PETA shearing video (alleged shearing, those were the words I heard multiple times, backed by compelling factual arguments) that had sent many major retailers (including H&M and Patagonia) into damage control mode—and put the U.S. wool market in jeopardy.

Temple Grandin (left) spoke on the issue of sustainability and animal welfare, her main criticism being that most policies are too abstract rather than based on tangible outcome-based measurements. It’s fine to say “we pledge to take good care of our sheep,” but be specific about when, where, and how.

We heard about several competing standards—including the Textile Exchange and Responsible Wool Standard—with arguments for supporting them countered by arguments that the ASI should create its own standard that would extend to both the meat and fiber sides of the market. Dan Gutzman from Pendleton (aka “Dan the Wool Man”) told us that they now visit and audit their shearings every year (massive operations across multiple farms with several thousand sheep each). “We’re surprisingly good,” he said. “But with the potential to do better.”

In terms of animal health and its potential impact on humans, we got an update on the USDA’s new Veterinary Feed Directive. There had been a problem with ranchers using antimicrobial-laced food and water all the time for weight gain and feed efficiency. The directive aims to curtail this by requiring prescriptions and only making them available for immediate therapeutic treatment. The directive aims to prevent the spread of antimicrobial-resistant bacteria from sheep to human through poor food safety. If someone lands up in a hospital, he or she will have a resistant bacteria that is very, very hard to treat. The directive is a good start.

In China, Kitty told us that their own production capacity has diminished because of the forced closure of several scouring plants for environmental reasons. Which may be bad for production but is fantastic for the environment. 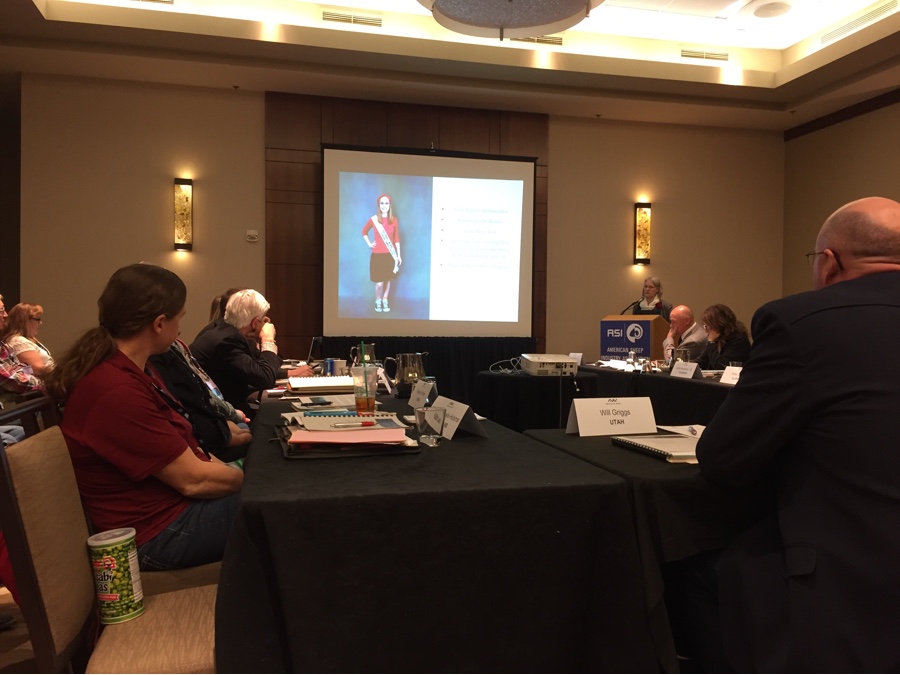 The connection between U.S. wool and the U.S. military is a quiet yet irrefutable one. The military purchases some 20% of the annual wool clip in this country, making it our largest single so-called consumer of American wool. This year alone, the Department of Defense has contracted for 60 different items made from wool.

“It’s all about headcount,” explained Ashley Bullock. “You use more wool for new recruits coming in. A 15-year vet uses less. Now, the Navy’s cleansing. An 18-year-old is a heck of a lot cheaper than a 35-year-old.” He concluded, “It’s in our best interest to have a growing army.”

The U.S. military has also been the major driver behind most of our textile innovation. We watched a test video of a new flame-retardant fabric that needed to be able to withstand four complete seconds of fire immersion and only produce 35% or less “total body burn” (third-degree burns) on the unfortunate human wearing it. At the end of the test, this fabric (which was primarily complex manufactured fibers but with 20% wool for comfort) had only 20-some-percent “body burn” and none was third-degree. “You could’ve worn that suit outta there,” Bullock said. The fabric, I should note, is made in Austria, but “they’re looking to move to the U.S.”

They’re also finishing some base-layer testing of an 88/12 wool/nylon blend that, if successful, will be incorporated into the military’s “new extreme cold weather clothing system.” (Or, as most knitters call it, “clothes.”)

Lesson 4: The World is Getting Warmer 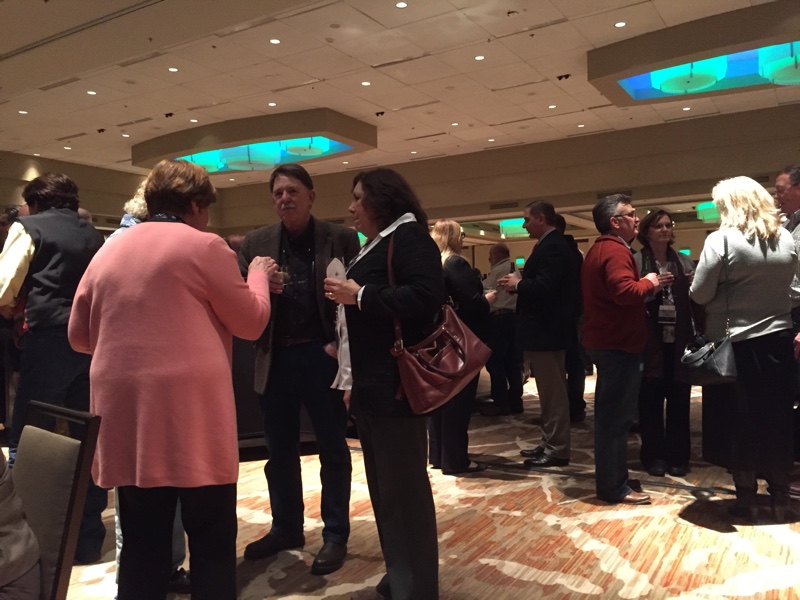 Rather like these people got warm at the ASI cocktail party.

There was no disagreement on the subject of global warming. The wool industry is changing, and it will need to continue changing because of global warming. Once a seasonal market (“wool is for cold weather”), wool is shifting from thick winter garb to finer, thinner knitted fabrics suitable for year-round layering. No surprise that the best price, yield, and profitability for farmers was in finewools (19 to 23 micron range) this year. Right now, there is very little market for coarse wools. (By “coarse” they mean a fineness that most knitters would still be quite comfortable using and wearing.)

In addition to layers, I heard the word “blends” being tossed around—especially blends with so-called functions, “performance clothes” with features like “alternative plasma treatments for water repellency.” (It made me appreciate how ahead of the curve Lorna’s Laces was with Solemate and Sportmate, both of which blend superwash Merino with a temperature-controlling fiber called Outlast.)

Twizel’s John Fernsell (the founder of outdoor wool clothing company Ibex) took the stage on Friday, and he complained, “We’re blending it away.” (I feel compelled to note that he was wearing a black pair of wool shoes that his company now sells for $140. Paging Allbirds, you’ve got pricey company.)

Lesson 5: Yes We Can 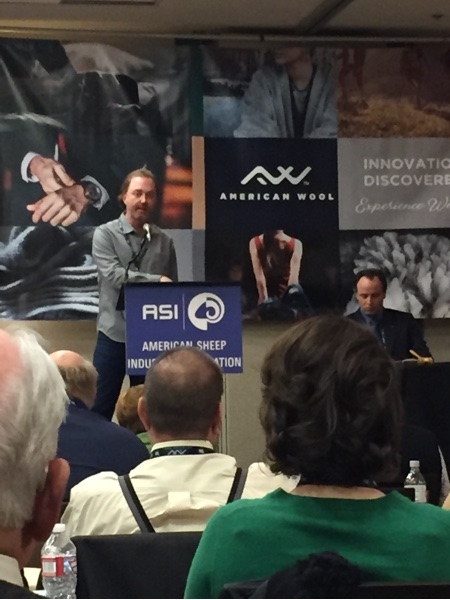 While Pendleton no longer produces all of its products domestically, I did see ways in which we can create thriving textile businesses that manufacture products at a decent volume, entirely in the United States.

It’s important to note that any completely made-in-America, machine-washable wool clothing or yarn was not a possibility until 2011. That’s when, backed by a grant from the U.S. military, a $400,000 loan, and the newly formed Sheep Venture Co., the American Sheep Industry Association got machine-washable equipment into the U.S. and installed at Chargeurs, a large commercial scourer in Jamestown, South Carolina. (We only have two large commercial scourers left, the other being Bollman’s in Texas.)

From this simple act sprung several new companies featuring all-domestic machine-washable items. Socks were a natural move. We heard from Kelly Nester of Nester Hosiery. For 23 years, his family’s business has manufactured socks for other companies. Nester had been restless for some time. When he learned about the new machine-washable wool facility, that was the spark he needed. He decided to create an all-American sock company called Farm to Feet.

After three years of development, during which he reached deep into the supply chain to understand each link better and tell that story to customers, Nester launched Farm to Feet in 2013. He managed to get everything, even the nylon, the paperboard wraps on each pair of socks, the in-store displays, is made in this country. The reception has been extraordinary. In 2016 alone, the business grew by 90%. He’s projecting an additional 65% growth this year.

The wool industry is beginning to understand the value of “storytelling” in marketing wool. That’s where the growth is happening—in products where the so-called “chain of custody” is clear from source to finished object, its story told. This mirrors what is already happening in the yarn world.

Temple Grandin cited a recent study of young consumers that concluded: Values are mattering more than science. “If you can convince people you share the same values,” she explained, “science can get through.” That convincing comes through (honest) storytelling. Fernsell agreed, noting that “instead of being creative in marketing, we’ve lowered the price. But if the story is told, consumers will pay more for it. We just haven’t been doing a good enough job.”

To help boost the branding and story of American wool, the ASI has hired a marketing firm. Probably the funniest moment of the whole weekend came when he paused mid-presentation to apologize for the photos he’d used. “You’d be amazed how hard it is to find stock photography of people doing interesting things out and about in the world while wearing wool.”

Clearly he has not yet tapped into the knitting community.

Highlights from 2015 Knit City in Vancouver, BC