Anatomy of a Cowl 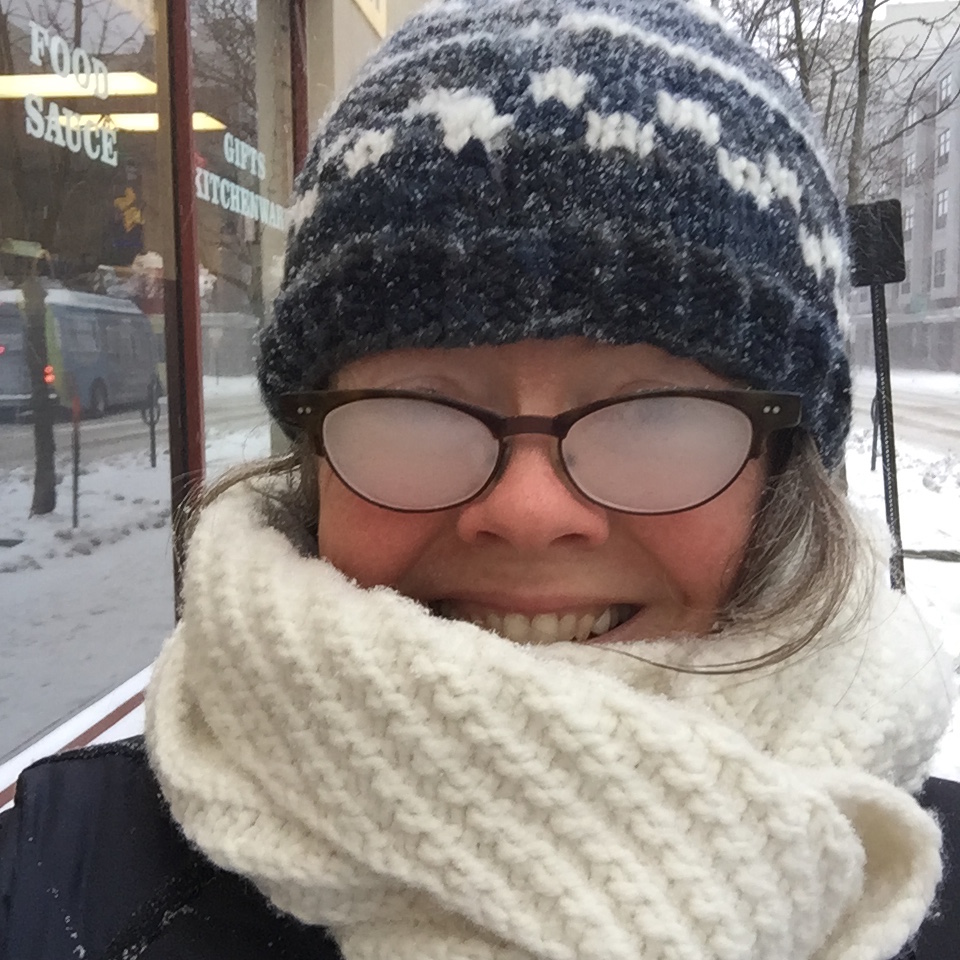 As a proud resident of a state whose temperatures can stay below freezing for up to half the year, I am very well-versed in the art of keeping warm. I suspect you are too, for the simple reason that nobody likes to freeze to death?

The Importance of Gear

We all have our industrial winter gear, our down jackets and our heavy boots and such. But those are just the outermost lines of protection. After them come layers upon layers upon layers—on the coldest days here in Maine, I’ve counted up to 15 articles of clothing on my body. (I’ve counted this, I should add, while walking quite comfortably to my coffee shop.)

The simplest solution is not to expose yourself to the cold. Stay indoors until spring. Obviously, unless you have an underground city at your disposal, this isn’t a practical solution. Not to mention the fact that getting outside, breathing the fresh air, moving your body, and interacting with other people is good for you. It’s key to my own mental health, and I can’t give that up for six months of the year just because it’s 12 degrees outside.

The answer is really quite easy: wool and layers. I realize I’m preaching to the choir on this one, but it’s important to note that a properly attired human body can be quite comfortable in the coldest, most seemingly inhospitable conditions. For the sake of our conversation today, the layer in question is the cowl.

Cowls differ from scarves in one very crucial way: they have no ends. Not only is this convenient for the wearer (no fussing with ends that keep coming untied), but it’s also a public service for those around you. If you’ve ever been in a crowded hallway being thwacked in the face repeatedly by people’s scarves as they’re being tossed around people’s necks, you’ll agree with me.

A cowl seems like a no-brainer. In many ways it is. With a circular needle, cast on a nice number of stitches for a fabric that’ll go around your neck once or twice, depending on what you like. Knit in whatever stitch pattern you fancy until it’s as tall as you’d like it to be, then bind off and wear.

But there’s more to a cowl than just a fashion statement. It’s part of a complex clothing ecosystem that, when applied in a balanced manner, will keep you warm and comfortable all winter long. The cowl oeuvre is rather like a mountain. Mount Cowlius, if you will. It has three distinct terrains, each with its own purpose. 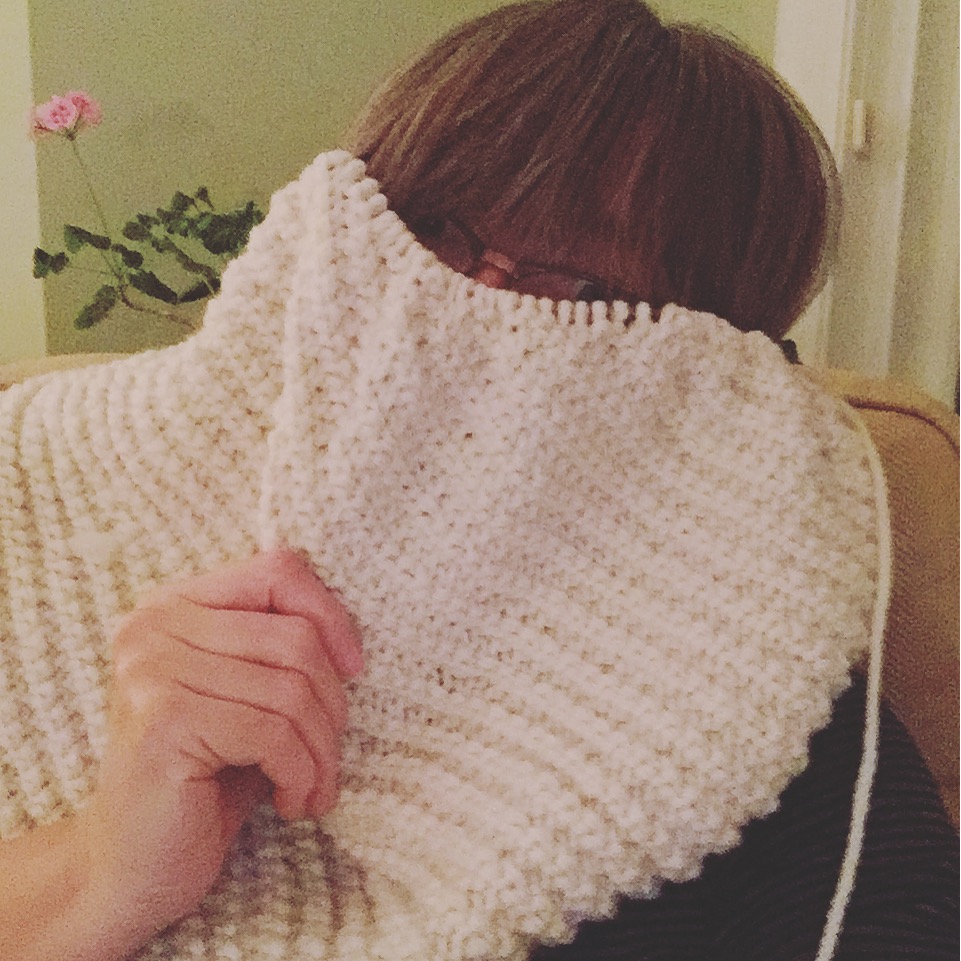 At the base-camp of Mt. Cowlius you’ll find the mega-cowl, that enormous knitted masterpiece that doubles as a neck brace and/or shelter if you get lost in the wilderness. It’s knit in the bulkiest of the bulky, and you tend to see it coming before you do the person wearing it. This is the first line of defense against winter. (Here I’m trying on my own mega-cowl doodle, a voluminous ribbed Cormo that threatened to eat me alive.)

I’m thinking of Jen Geigley’s GAP-tastic Cowl or Abi Gregorio’s Drop Stitch Cowl or Jane Richmond’s Marian or Purl Soho’s Fluted Cowl as four classic examples. The Fluted Cowl uses a gigantic Super Soft Merino yarn that’s as close to burying your face in heaven as you can get. Quince & Co. Puffin begs to become a mega-cowl—and right now they’re featuring Natural Hand-Dyes that were dyed by none other than Kristine Vejar of A Verb for Keeping Warm. (We’ll return to her in a minute.)

Another ideal mega-cowl yarn is Quarry from Brooklyn Tweed. Normally you’d want some degree of twist to hold fibers together in a yarn and, consequently, in your garment. But mega-cowls are an exception. Unless your daily routine involves vigorously rubbing yourself against things for hours at a time, you won’t need an extraordinarily well-twisted, abrasion-resistant yarn for your mega-cowl. These cowls tend to be tall, poofy, somewhat theatrical in nature, almost like a chef’s toque. In the case of Quarry, it’s made from unspun, carded fibers that would become Shelter or Loft if drawn and twisted. Instead, they’ve been gently rubbed and/or twisted together into a chunky stream of softness.

Mega-cowls are, by default, superb ecosystems for winter. But the bulky nature of the yarn and resulting stitches can sometimes allow air to sneak through. 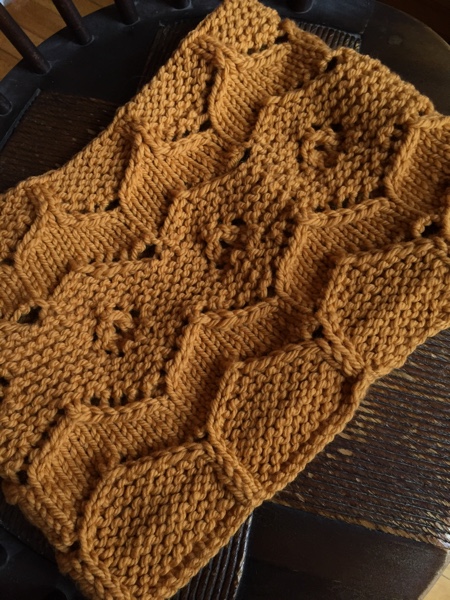 For more protection, we continue climbing Mt. Cowlius until we reach the treeline, which is the preferred habitat for the standard cowl, the “cowl-cowl.” In the cowl-cowl we go from knitted house to a comfortable living room for your upper torso.

Usually knit in some variant of worsted-to-DK-weight yarn, the cowl-cowl still has heft and volume but with the possibility for far greater stitch definition and fabric cohesion. Colorwork, texture, plain old stockinette, all are fair game.

Here we have tons of design examples, everything from Antonia Shankland’s Honey Cowl (with 22,588 projects on Ravelry) and her Breton Cowl to Hilary Smith Callis’ Starshower. This weight is also a favorite for brioche, including Stephen West’s masterful technicolor Briochevon Cowl or Syncopation Adoration.

In colorwork, Ysolda’s Pyukkleen presents a wall of color that borders on mega; while her Suloinen, shown here, straddles mega-cowl and cowl-cowl by being “big” yet only wrapping once. (The yarn was Clara Yarn Cormo 3.0, which also straddles heavy worsted and bulky depending on the function of the fabric.) For knit and purl texture, Leila Raabe’s Sweetgrass Cowl gives lovely detail, while Jared Flood’s tilting welts in Setzer are mesmerizing. To show off the nuanced perfection of hand-dyeds in just 200 to 400 yards of yarn, Jane Cochran’s Persimmon fits the bill perfectly. For extraordinarily simple garter-stitch shaping at a worsted weight, check out Bethany Hendrickson’s aptly named Straightforward Cowl.

For yarns, the classics would be the semi worsted offerings from Quince & Co., or Brooklyn Tweed‘s woolen and worsted counterparts, or perhaps the tender delicacy of Woolfolk, the easygoing machine-washability of Ewe Ewe. In the undyed world, Ysolda’s Blend No. 1 is a perfectly succulent choice.

If it’s hand-dyed color you seek, the world is yours. Obvious choices would be Madelinetosh, Hedgehog, and La Bien Aimée, as well as Briar Rose, Spirit Trail Fiberworks, Miss Babs, Indigodragonfly, SweetGeorgia Yarns, or Sweet Fiber Yarns, to name a very few.

If you like stranding two or three yarns together, consider any of the Shibui offerings. Last but very much not least, consider the masterfully chosen, subtly dyed bases of Kristine Vejar’s A Verb for Keeping Warm—the majority of which fall comfortably in the cowl-cowl level.

Most of us stop here for the winter. There’s a pleasant camp, comfortable cabins, and fine company. But if you really want to summit Mt. Cowlius, you’ll need one more layer. 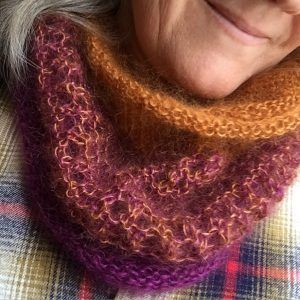 At the snow-capped peaks of Mt. Cowlius you will discover, at last, the undercowl. The undercowl is like an undershirt, it’s a base layer for the neck. Think of it like a turtleneck that never got attached to the body, with a little length to anchor it in your clothing—but not so much length that it becomes the delightfully named “dickie.”

The undercowl is for humans what cashmere and qiviut are for animals, that fine undercoat of insulation that, when combined with a bulky outer layer, allows us to roam freely in the high Himalayas of suburbia.

An undercowl is also our opportunity to use a small amount of the finest, most luxurious fibers you can afford. I’m talking the fibers that are far too expensive for a full-sized garment, or perhaps you just don’t have the patience to knit a sweater at 12 stitches to the inch? These yarns are often too fine and delicate to stand up and greet you in a bigger cowl. But here, in a tightly fitting base layer that hugs the body, they’re perfect. My dream undercowl can be squeezed into a legal-size envelope and mailed anywhere in the United States using just one stamp.

I’m not seeing a ton of recent design innovation in the undercowl (yet?), possibly because of its slightly limited real-estate. One very important exception being Joji Locatelli’s 3 Color Cashmere Cowl. I consider this an undercowl on steroids, with enough substance to give a mega-layer while also giving that essential base of softness and warmth.

Because the undercowl sits directly against tender skin, the yarn choice will be uniquely yours. For the finest of fine, of course, you would want to go with pure qiviut or qiviut and silk. Then there’s cashmere, such as the extraordinary fibers grown at Ravenwood Cashmere here in the United States, or perhaps you’d like a succulent blend of Merino, silk, and brushed cashmere? Hand Maiden has a plush, unusually plied cashmere called Helix that needs nothing more than stockinette to do the trick. How about organically dyed cashmere that can be traced to small family farms in the mountain communities of Kyrgyzstan? June Cashmere is what you want. (Tanis Gray has a gorgeous cabled cowl pattern that uses two skeins.) Are multiple colors more your thing? Consider the Lux Adorna Knits kits.

The presence of an undercowl gives you far greater leeway with your outer cowl, too. With a fine insulating layer next to your skin, you can choose a mega-cowl or cowl-cowl whose design may have a few more holes in it, fit a little more loosely, leave a few more gaps through which winter winds could whip through. Undercowls also let you use far sturdier, less expensive, more interesting wools for the outer layer—think fabulously hearty British woolens Beatrix Potter would’ve loved.

All Part of a Healthy Ecosystem

Just as we can’t live solely on a diet of kale, nor can we live on a diet of donuts. It’s all about variety, balance, and moderation. The undercowl rather depends on the presence of something bigger around it to do the bulk of the weather protection—and the bigger cowls benefit from having a little something tender underneath.

Just as the arctic muskox can survive the most rugged of extremes because of its dual coat, so, too, can the humble knitter on her way to the coffee shop. Let the megacowl or cowl-cowl be your outer coat, with a fine secret undercowl of metaphorical cashmere beneath.

One final thing to know about cowls: They make great listeners. During the coldest moments of winter, when I’ve just rounded the corner onto Portland’s Congress Street and the wind hits my face just so, fogging up my glasses and freezing my eyelashes together, I can bury my face deep into the cowl and mutter a full round of expletives nobody will hear. The thicker the cowl, the better the listener. Lean your face in and tell it your problems, and before you know it, spring is here.