Back in February, I got an email from the representative of a Swiss company called Baabuk (pronounced “baa-book”). They’d seen my review of Allbirds, picked up on my passion for all things wool, and thought I might like to see the wool shoes they were producing.

I looked them up, found this charming video they’d made about their boots, and knew we had a match. It being a little late in the season for wool boots, we chose to look at their lace-ups. I was curious how theirs would measure up against Allbirds. A few weeks later, a box arrived from Germany covered in colorful stamps. Inside: a new pair of Baabuk Urban Woolers. 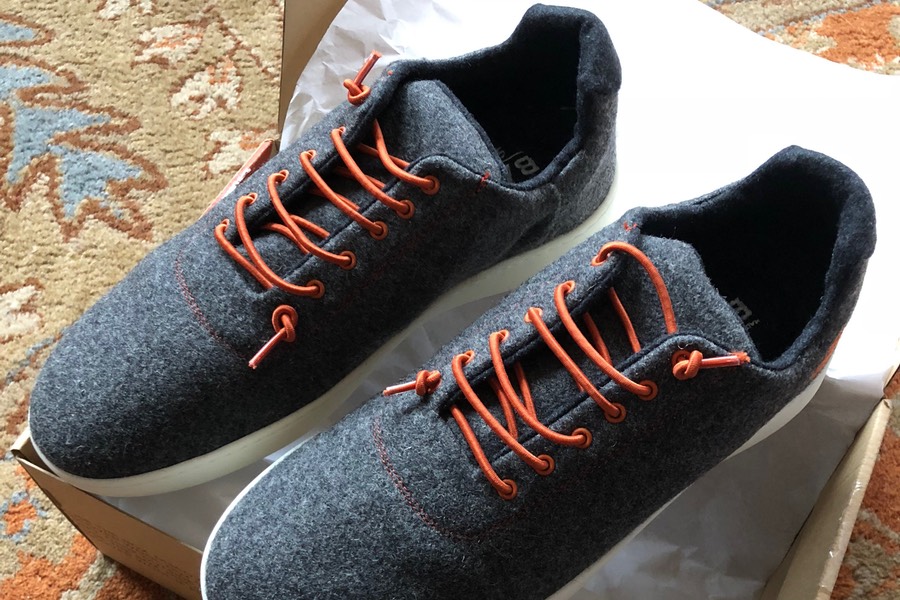 At first, it was hard not to see these only in comparison to Allbirds. The concept and styling are so similar. Only after I wore them and dug deeper into their story did I realize I’d stumbled upon something special.

In case your Internet connection goes down and you can’t read any further, just know this: Everything in these shoes, from the wool to the yarn to the felted fabric to the shoes themselves, was produced within a 500-kilometer radius of Portugal’s Porto region. We’ve heard of eating local and knitting local, but this is the first time I’ve been able to “walk local.”

How curious that three main players in the wool-sneaker market (Allbirds, Baabuk, and Giesswein) all got their start through crowdfunding on Kickstarter. One month before the Allbirds campaign was fully funded in 2014, Baabuk had successfully funded its campaign to make the perfect wool slipper. The following year, Baabuk turned its attention to wool sneakers. In 2017, Giesswein followed suit.

Is Kickstarter a hotbed of shoe activity, or has the traditional business financing world still not woken up to wool? Because clearly the rest of us have. 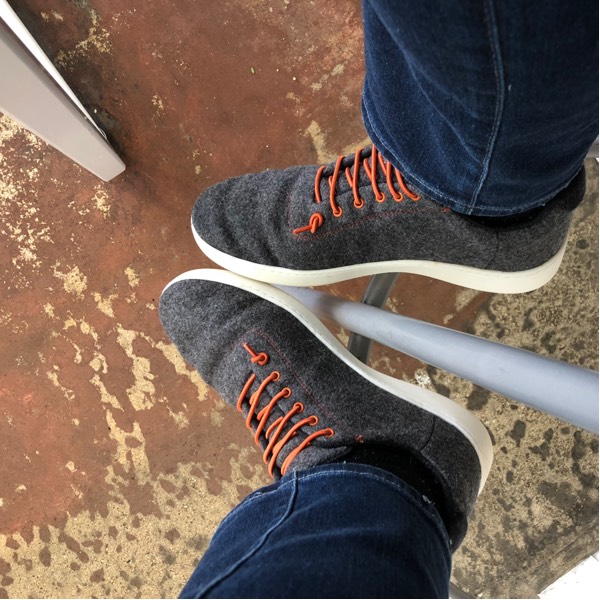 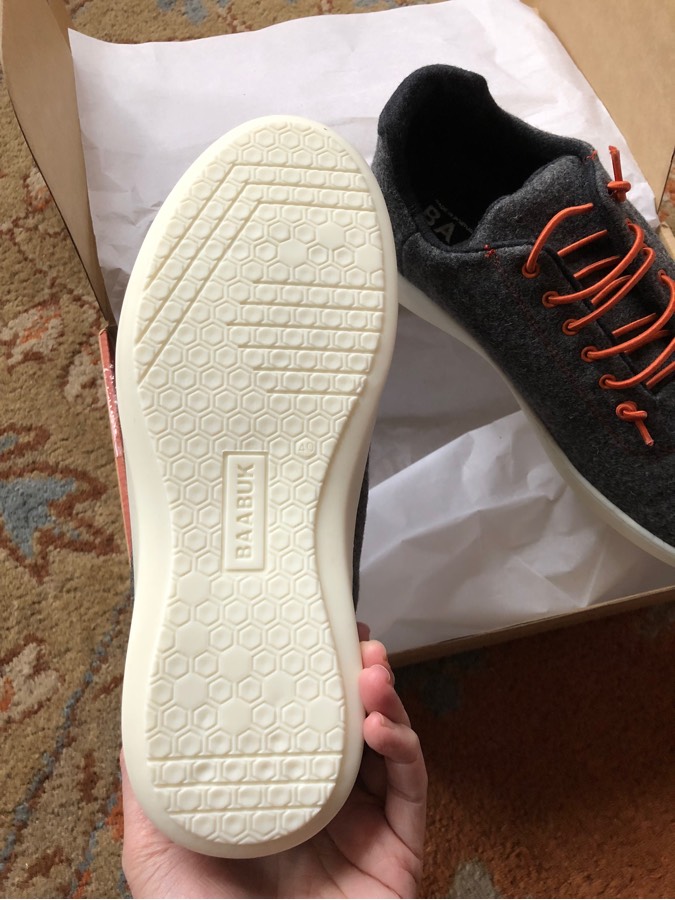 The Sneaker is the simpler of the two, more reminiscent of the cotton canvas sneakers of yore.

The Urban Wooler has more shapeliness to it, with a padded lip at the back of the heel opening, more curvature in the footbed, and six eyelets (instead of five) for a narrow fixed elastic shoelace that’s tied at both ends.

The Sneakers and Urban Woolers are available in unisex European sizes ranging from 35 to 48, translating roughly to a women’s US 5-12 and men’s 7-14. (By comparison, Allbirds is available in whole sizes only, women’s 5-10 and men’s 8-14.)

The lightweight sole is made from thermoplastic rubber, and the high-density foam insole is topped with wool. The sole in both the Sneaker and Urban Wooler is vertical, by which I mean it doesn’t flare outwards to give the illusion of stability. In fact, flip the shoe over and you’ll see that the sole tapers in just a tiny bit. The visual effect is slimming.

On the inside of each heel, the Baabuk sheep logo is embroidered in a contrasting color.

The shoes are machine-washable on the gentle wool/handwash setting. Baabuk advertises that they can be worn without socks, reason being that wool is naturally resistant to dirt and the bacteria that tend to make shoes smell. 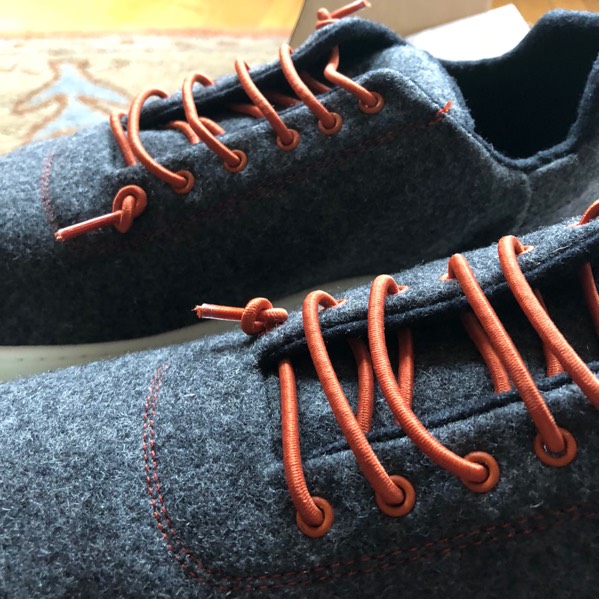 The shoes are designed to be slipped on and off without undoing the elastic lace. The tongue needed a little readjusting after my foot was in, but then I was good to go. Immediately, I noticed a comfortable solidness and stability to each step. I missed the walking-on-clouds feeling of Allbirds, but I didn’t miss the walking-on-marshmallows squish that sometimes came along with it. I could feel gel cushioning at the arch and under the toes.

Then I felt something else. A prickle.

These are Merino wool shoes, right? And the marketing material says they can be worn without socks, right? Yet where the Allbirds felt like luxury Swiss undergarments against my feet, these were definitely giving me a faint wool prickle.

I put on a pair of socks and kept walking, but I started thinking. Merino is marketed as the itch-free wool. What kind of Merino could possibly produce this prickle? Were they lying?

Tracing to the Source

One sentence buried deep in the Baabuk website explained it all. It noted that the sheep who grew the wool, the scouring plant where the wool was washed, the mill that spun the yarn and wove and felted the fabric, and the people who turned those materials into finished shoes, all exist within a 500-kilometer radius of the Porto region. I can’t remember the last time I wore anything so seemingly mainstream and yet so distinctly local.

This means the Merino in these shoes comes from Portuguese Merino sheep, a variety tends to be a little rougher than what we think of when we hear the word “Merino.” Its average micron approaches 25. The raised-pinkie Merino you and I usually think of falls more in the 18 to 22 micron range. Allbirds found 17.5 micron Merino for their shoes. That’s extraordinary for softness, but it does mean greater vulnerability with wear. 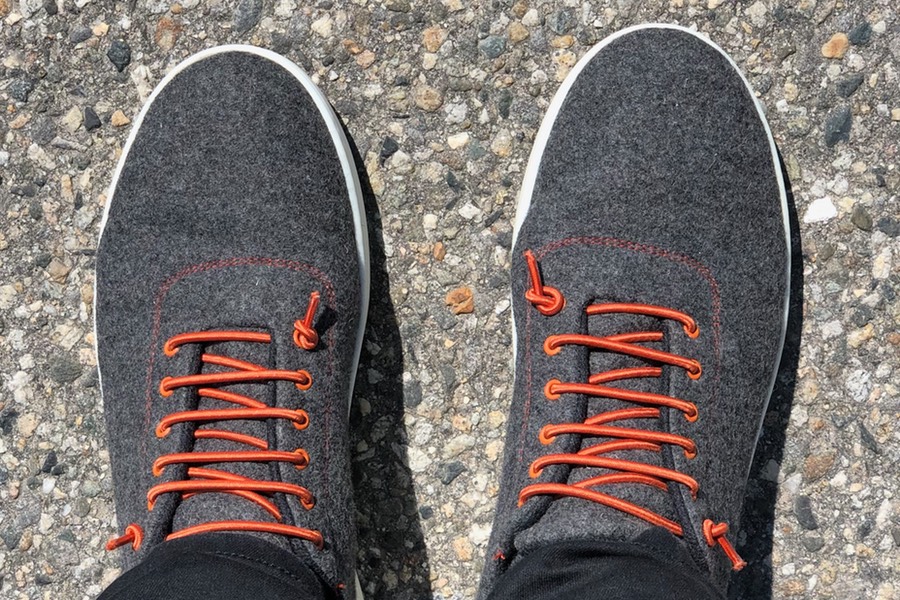 The Power of Place

Back to that Portuguese Merino. These sheep are likely descendants of the royal Merino flocks that migrated up and down the Iberian peninsula every year for grazing. Shepherds followed well-worn paths that sometimes crossed from Spain into northern Portugal. Once there, occasional crossbreeding with more rugged native flocks resulted in a more robust sheep that’s still called Merino.

The Serra da Estrela mountains in northern Portugal were a key summer grazing area for the Merino flocks. Mills and dyehouses were established in the region, and scouring plants used water from the abundant mountain rivers.

But by the 1980s, the region experienced the same implosion that American mill towns were facing. By the early 2000s, all but one mill had disappeared, and the population had plummeted.

In looking for a people and place from which to source materials and manufacturing, Baabuk discovered that this region had a long history of sheep grazing and the manufacture of a special felted material called “burel” that the shepherds wore to keep warm. They also discovered that this region was being brought back to life. Husband and wife team João Tomás and Isabel Costa had bought the last remaining mill and were reviving the manufacture of burel fabric for entirely modern and innovative applications.

Baabuk’s husband-and-wife founders saw a region with wool and manufacturing capacity and a population that needed help, and they saw how the lightweight, flexible burel fabric could be used for their shoes. They had found one tiny region of Europe where this shoe could be done in a way that would also help restore local industry and tradition. It was both a logical and considerate choice.

A Big Small Price to Pay

The shoes retail for €120 (you’ll see the price breakout below, with the U.S. option at $140). That’s high for a pair of sneakers. On the other hand, it’s a modest surcharge for all that these shoes accomplish culturally and economically in Portugal. That’s in addition to the beauty, comfort, and functionality they deliver to the wearer.

Just keep those elastic laces tied tight, because people are going to notice and they’re going to want a pair. My dentist almost wrestled me for mine.

Manufacturer
Baabuk
Average retail price
The main Baabuk site retails these for €120. US customers can purchase stateside from Baabuk USA for $140. There’s also a Baabuk Australia ($195 AU), Baabuk Canada ($159.99 CA), and Baabuk Switzerland, where the company is based (130.00 SFR).
Where to buy online
Baabuk.com, or Baabuk USA, Baabuk Australia, Baabuk Canada, or Baabuk Switzerland, depending on where you live.
Review date
4/19/18
Origin
Wool from Merino sheep raised in the Serra da Estrela region of northern Portugal. Wool processed into fabric in Portugal, and shoes manufactured in Portugal.
Source of review pair
Provided by Baabuk.