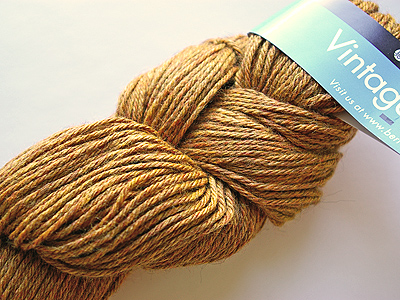 A great and often heated debate exists between those knitters who like acrylic blends and those who don’t. Much of that debate has actually been fueled by blends that simply don’t live up to their potential.

I personally have a strong preference for natural fibers. When knitting for myself, that’s all I’ll use. But I also have great respect for the power of the blend. Sometimes—whether for durability or economy or practicality—it just makes sense to use a less expensive, easy-care yarn. Not everybody can afford to spend large sums of money on yarn for every project; and not every project should be knit in yarns that require careful feeding.

It’s been my experience that lengthy care instructions tend to intimidate some gift recipients to the point where they simply put the gift away and never dare wear it. And sometimes we’re knitting for folks who have no control over their laundry, or who have no laundry facility at all. My point is that sometimes you need a good inexpensive machine-washable yarn.

Finding that yarn is a challenge, and the waters are muddied by many acrylic blends that just don’t deliver. In Vintage, Berroco made a concerted effort to give knitters a yarn that has all the qualities of a good wool but with an easier care label and substantially lower price tag. It still contains wool—40% in fact—but that fiber has been blended with 52% acrylic and 8% nylon. 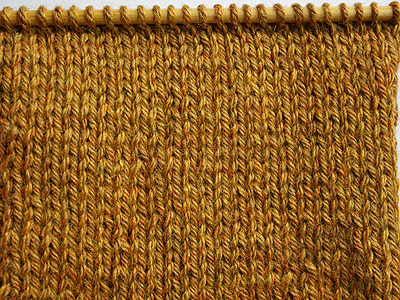 The label suggests either US 7 or 8 needles. I chose a size 7 to err on the tighter, bouncier side. Knitting was swift and relatively problem free, although I did create several snags when knitting by touch alone. The yarn willingly let me undo a stitch and drop several rows to retrieve the dropped plies, and the final fabric showed no signs of surgery.

Vintage has a subtle sheen to it that almost suggests silk, but that’s most likely the acrylic and/or nylon talking. The 40% wool gives the yarn a gentle fuzz along its surface, and the smooth nylon and acrylic fibers have also been set with a fine crimp pattern to further mimick the look and feel of wool.

The yarn flowed smoothly through my hands without much of that telltale “sticky” feeling that can sometimes accompany a pure synthetic yarn. My stitches were mostly even, although the yarn clearly didn’t want to forgive the few spots where my tension had strayed.

My swatch survived a cold tumble in the washing machine (on gentle cycle), while another swatch did equally well when hand-washed in warm water. Neither swatch showed any change in row or stitch gauge, but they both revealed a hint of cohesive bloom along the surface.

Wool loves water, but the high synthetic percentage in this yarn resulted in my swatches taking quite a long time to dry.

Vintage has a pleasant touch that is both soft and substantial. There isn’t a hint of itch here, despite the fact that the wool content is not identified as a Merino, which would be finer. It is perfectly suited for babies and children, but the somewhat earthy, saturated colorways also help it work equally well for grown-ups.

While the acrylic and nylon fibers have been artificially crimped to better blend with (and mimic) the wool, they still lack one very important feature: scales. Wool fibers are lined with tiny microscopic scales that help the fibers adhere to one another in yarn and, consequently, in your fabric. With no such surface force to help the fibers adhere to one another, they began to slip and slide under abrasion.

A halo readily developed across the swatch surface. Those fibers became particularly dense in some spots, developing what would eventually become clump-like pills very close to the surface. Because the synthetic fibers tended to have a longer staple length—sometimes nearly the same length as the wool fibers, sometimes several inches longer—those clumps were deeply rooted in the fabric. When I tugged on them, entire stitches started to move. It’d be far safer to snip them off with a sweater shaver.

Vintage is great for what it is—a low-priced machine-washable synthetic blend. Berroco has kept the price-point extremely fair, at $8.50 (up from $5.95 when this review was first published) per 217-yard hank. To put that in garment terms, you could get two hats out of one skein. Two skeins would be more than enough for one of Elizabeth Zimmermann’s February baby sweaters (with leftovers for a hat or two). A basic medium-sized women’s pullover would take six skeins, keeping the tab at a mere $52. The yarn performs equally well in stockinette and colorwork. Its smooth four-ply construction also renders textured stitches, such as cables and gansey styling, with lovely detail.

Bottom line? When you need a yarn that is soft, inexpensive, and can be tossed in the washing machine without worry—but you also want a yarn that will feel good against your hands while you’re knitting—Vintage is a solid contender.