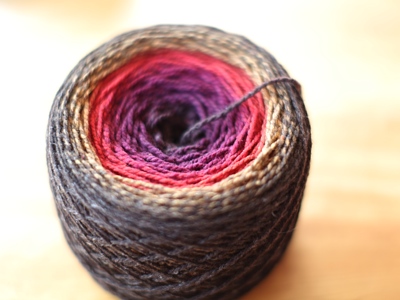 Even mill owners like to experiment now and then. Colorflow is the playtime project of Anne Bosch, the owner of Blackberry Ridge Woolen Mill. She wanted to create a yarn with extremely long, slow color transitions—far longer than what you can get if you hand-dyed a standard hank of yarn, which is usually 72 inches in circumference.

Some yarn companies cheat and machine-knit large sheets of stockinette that they dye in slow color repeats. Then it’s simply a matter of unraveling the “blank,” as it’s called, and re-skeining the yarn.

But when those color changes are achieved in the fiber itself, before ever being spun, you have a remarkable yarn. The most famous example would be the likes of Noro Kureyon. Different colors of fiber are fed into the carding machine at specific sequences, then the carded fibers are stripped off and spun into singles.

Anne Bosch wanted to do something even trickier: Ply two such singles together into a rounder, more structurally stable yarn that still maintains those slow, elegant color repeats. At first, her carding machines did too good of a job and the colors were blended together into a single mishmash. But after several tries, she mastered the process of creating a single roving of fiber with consistently slow, steady color migrations. Next came the challenge of spinning each roving with such precision that, when two such strands were plied together, the colors would still match. Any time a strand of roving breaks or tangles on the spinning frame, the color sequence risks being thrown off, so this is no small feat.

As a playtime project, Colorflow is available in limited supply, and skein yardages vary depending on the color. If you’re a fan of slow repeats, however, you will absolutely want to give one of these massive skeins a try. 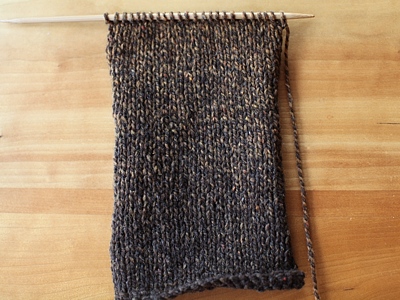 Anne spins a perfect woolen yarn. This I know from years of admiring her other yarns, and more recently from the work she did for my Great White Bale project. She has very high standards for all that she produces.

Colorflow is composed of two strands that are plied together at a fairly perpendicular angle. That perpendicular twist, combined with the puffy woolen constitution, results in a remarkably round yarn with exceptional stitch definition.

It’s also a breeze to knit. By row two, I was knitting and purling by touch alone. All my stitches looked perfectly even, and I encountered no knots or peculiarities in my skein.

The woolen spinning process involves spraying oil on the fibers, and that oil can be very unglamorous—picture your own hair if you forgot to rinse out all the shampoo. Anne washes every skein she sells, so I knew there was no risk of spinning oil.

But I can’t give you an accurate report on the yarn’s overall colorfastness because to do so would’ve required that I knit up the entire skein, all 400+ yards of it. The part that I did knit was a dark brown shifting to a lighter yellowish brown. However—and this is yet another thing that makes the yarn so much fun—the brown wool is actually from a different sheep breed than the rest, taken off the backs of naturally brown sheep. It hasn’t been dyed at all. The rest of the colors? I’ll keep knitting away and let you know what happens.

Washing was a joy, as this yarn did what all good woolen-spun yarns do: the fibers relaxed, stretched their legs, and filled in all the nooks and crannies in my swatch. Once dry, I had a beautiful piece of cohesive fabric with a smooth bloom along the surface. There was no change in stitch or row gauge.

This yarn isn’t made from your typical powdery-soft imported Merino. This is not an anonymous wool at all. Ann knows the farm where the sheep were raised, she buys the entire year’s clip and personally drives it down to Bollman’s in Texas to be scoured. She watches and patiently waits for her fibers to be baled, and then she loads them back up into a truck and drives them back home to Wisconsin.

In terms of touch, there’s not much itch to this yarn, especially after you wash it and let the fibers relax and bloom into place. I will tell you that the natural brown wool feels a micron or two thicker than the other fibers, so if you’re a Princess and the Pea kind of person, you may want to stick with the all-dyed colorways (i.e. those without brown).

The flip-side of the overall heartier constitution of this wool? Greater durability for your finished garment. You want those fibers to be long and strong to compensate for the fact that most woolen-spun yarns, including this one, are actually over 90% air.

Once the fabric had been washed and allowed to bloom, the surface gained such cohesion that it was reluctant to allow any pills to form. Eventually a few wisps appeared but only after what I’d consider extreme duress. 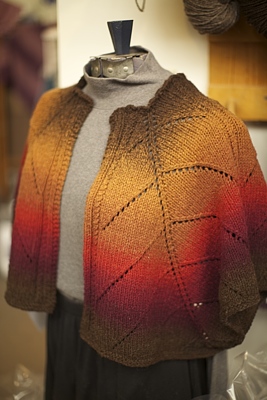 Now that I’ve sung Colorflow’s praises, it’s time for the drawbacks. Primarily, matching it to projects. You’re working with a finite amount of yarn that has a very specific progression of colors. Sweaters would need to be carefully planned and probably require extra skeins if you wanted to match color progressions everywhere.

Fortunately, not only does Anne own a mill, she’s also a great knitter and designer. Her Santa Fe Shoulder Wrap (shown here) was designed to showcase the color progressions and accommodate the yardage of each individual skein.

Any stockinette-heavy shawlette would be perfect in this yarn. You could shake things up and use garter stitch too. Likewise, if you wanted to make gifts for all your friends, you could buy two wildly contrasting colorways and make several amazing versions of Jared Flood’s simple striped Noro scarf. But you probably won’t be doing hats or mittens or anything so small that the transitions are lost.

No, obviously this yarn won’t be for everybody—just as some people are fine with one kind of oil in their pantry. But if you do enjoy the thrill of the rare and unusual yarns that tell a great story, support good people, and produce interesting results, definitely add Colorflow to your list. Considering the painstaking work that goes into producing each skein, and the hefty yardage contained therein, the price is a steal.

Yarn Name
Colorflow
Manufacturer
Blackberry Ridge Woolen Mill
Fiber content
100% U.S.-grown wool
Gauge
None given, but it’s a worsted-weight yarn that gave me 5 stitches per inch on US 7 (4.5mm). Woolen-spun yarns have greater gauge flexibility, so you could easily go up or down a needle size to fit your needs.
Average retail price
Varies from $14.50 to $42.50/skein depending on yardage
Where to buy online
Blackberry Ridge Woolen Mill
Weight/yardage per skein
Varies, most average 7 oz / 420 yards (384m)
Country of origin
U.S.
Manufacturer’s suggested wash method
None given, but I’d recommend gentle handwash in lukewarm water with mild soap. Rinse in same temperature water, blot dry in a towel, then lay flat away from light and let dry.
Review date
5/23/2013
Color used in review
Bright Santa Fe
Wholesale distributor
I don’t know if Blackberry Ridge Woolen Mill sells its yarn wholesale to other stores, but it’s worth a query if you’re interested.
Source of review yarn
Purchased at Blackberry Ridge Woolen Mill