First came Shelter, launched in 2010—and then Loft the following year. Quarry completed the trilogy. 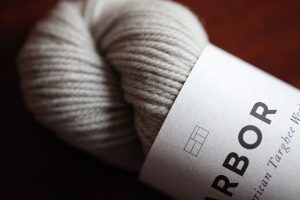 All three of the core Brooklyn Tweed yarns shared a very specific parentage. They were made from the coats of Targhee-Columbia sheep from Wyoming, whose fibers were scoured in the United States and then dyed in Philadelphia. Finally, they were shipped to the Harrisville Mill in historic Harrisville, New Hampshire, to be blended into their heathered colors, then spun, plied, and skeined.

Today, six years after the launch of that first yarn, Brooklyn Tweed is taking a big leap. It’s crossing the stream and entering the smooth, worsted-spun market with a three-ply Targhee dyed in 30 completely solid shades. Blink and you’ll think it’s Quince.

“One of the more recently established breeds” (if I may quote from The Knitter’s Book of Wool here) “the Targhee was developed by the U.S. Sheep Experiment Station in Dubois, Idaho, in 1926. The goal was to develop the ‘ideal sheep” based on three-quarters fine wool and one-quarter long wool blood. They bred 9 Rambouillet rams with 210 ewes, themselves crossbreeds of Rambouillet, Lincoln, and Corriedale. By the late 1940s, some Columbia genes were added to the mix. The resulting large animal grows a fine, dense, and uniform fleece whose magnificent high crimp gives any knitted fabric a plush, elastic quality reminiscent of well-yeasted bread dough.”

Targhee is a safe and solid choice for a company that needs quality breed-specific American wool in large quantities. It’s a popular and thriving breed among ranches in the American west.

It’s also a breed many knitters know, not just because it was on the previous Booklyn Tweed labels but also because it’s a popular fiber base for hand-dyers. A Verb for Keeping Warm sourced and spun its own Targhee into a plush chunky yarn called Warm. At the most recent New York Sheep and Wool Festival in Rhinebeck, Spirit Trail Fiberworks‘ worsted-weight Zalti was the first to be snapped up. 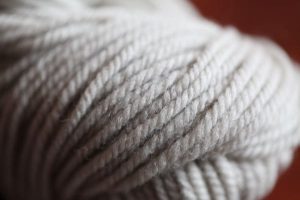 That plush, elastic quality of Targhee was immediately noticeable. Pull out a length of yarn and give it a tug; you’ll see the three plies flatten out in a sort of slow-motion barber pole effect. Arbor has great energy and bounce, with a ply angle on the high-perpendicular. It’s like a spaghetti that’s been cooked perfectly al-dente.

Like the yarn itself, knitting was smooth and easy. I found no knots or irregularities in my skein, only two little tufts of un-spun fiber that had attached themselves to the yarn and were easily pulled off.

The well-rounded three-ply construction and nearly perpendicular ply both suggest Jared designed this yarn with vivid three-dimensional stitch definition in mind. If his previous three yarns were felt tip pens, this is a crisp rollerball. The design team will be able to draw smooth, crisp lines that beg for cables, ribs, and textured stitches. The higher the relief, the better. 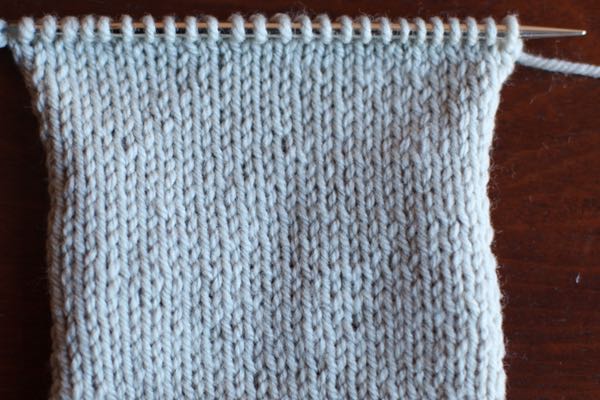 The high energy of the twist gave a faint wobble to the stitches that you wouldn’t see in a more relaxed yarn of the same composition. On purl rows, holding the yarn in my left hand, I watched the yarn twist tighter and tighter on itself. Instead of stopping to smooth out the twist, I decided to knit with it and see what happened—which may be where a good degree of the wobble came from. In a swatch, it’s easy enough to stop and relax your yarn, but when you’re plowing full-steam ahead on a big project, you may not have the patience to do so.

There was no snagging, and the yarn slid comfortably along my pointy-tipped Addi Turbo Rockets, clutching the smooth needle surface while allowing for both speed and easy control.

The marketing materials note that Arbor was intended to be “a classic workhorse yarn,” and it certainly behaved like one. Rather than swatch the yarn in 30 different fabrics, I’ll send you straight to Brooklyn Tweed where you can see this yarn in action. (They launched with nine accessory patterns.)

With a label touting the yarn’s bloom with hand washing, I was curious to see how much of the wobble would even out in a warm soapy bath. I filled a clear glass bowl with warm soapy water and dropped in the swatch. I squeezed and swished and waited. Fairly quickly, I could feel the fabric relax far more than I expected. It went from firm and bouncy to a fluid wisp. 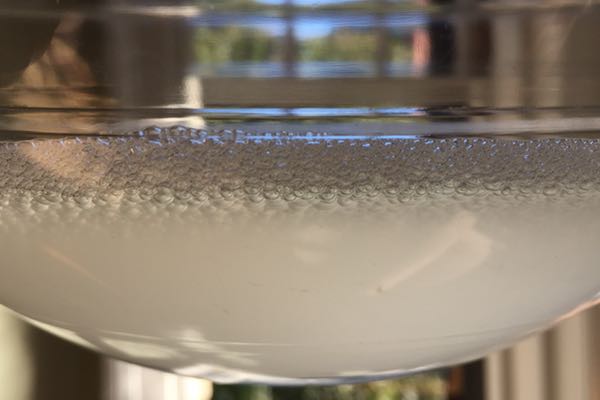 I’ve rarely encountered bleeding problems with yarns dyed by the Saco River Dyehouse, so I wasn’t concerned about having a light-colored yarn I couldn’t test for colorfastness. My swatch did, however, leave a milky residue in the wash water. It’s nothing damaging or worrisome, but I have encountered it with other Saco River Dyehouse-dyed yarns.

My stitches appeared flat, almost the way alpaca or a longwool looks when wet. All the excess energy seemed to have disappeared. I prodded my swatch back into shape and waited. 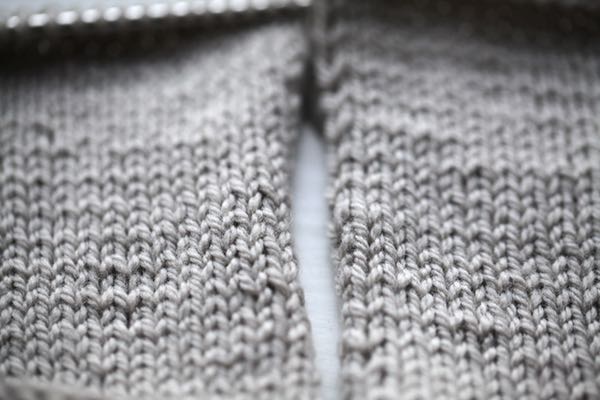 Once the swatch was dry, I set it next to an unwashed swatch. (The unwashed swatch is on the left in the above photo, washed swatch on the right.) The gauge seemed nearly spot-on, and a faint bit of the wobble had relaxed. But I couldn’t really see much of a bloom.

The marketing materials indicated Arbor’s fibers average 23 microns, just one notch above the roughest end of Merino. It felt perfectly fine and unobtrusive against my own skin. Unless you’re a highly sensitive individual, I’m guessing you’ll find it quite lovely and functional.

But the real thing here is not touch but durability. Loft and Shelter both suffered from ongoing complaints about breakage. Now, along comes Arbor, the strong big brother who can protect its weaker siblings on the playground. I was still able to tug the yarn apart—but the tug was a hefty one. This yarn can be knit with blithe abandon, frogged and reknit again and again, without worry of any snaps. Only after a sustained period of vigorous abrasion did the fabric begin to show signs of deterioration.

This is a big change for Brooklyn Tweed. It’s like someone with glasses on for the first time. The real question is whether Brooklyn Tweed can expand its brand aesthetic into the realm of solid hues in a yarn whose smooth style is already well represented by others.

But knowing Jared and his team, I suspect the answer is, yes. Jared does nothing haphazardly or half-heartedly. This yarn has the earmark of thoroughness at every step: a quality domestic breed whose fibers will be reliably available, spun at a respected and experienced mill in Maine (Jagger Brothers), and dyed at the no-longer-just-a-startup Saco River Dyehouse. Structurally and behaviorally, it also meets that “classic workhorse” goal head-on.

Brooklyn Tweed operates at a scale that makes this move significant. It sends a strong message to the industry, on all levels of the chain, who may be looking at domestic yarn and garment design and production.

Speaking of which, I wonder when Jared will tire of handknitting and transition into the world of his own domestically sourced ready-to-wear, becoming our next Ralph Lauren. Or maybe he never will, and we’ll get to wear his heart on our own sleeves for many more years to come.