Letting a designer create his or her own yarn from scratch is like giving a child the keys to a candy store. It’s easy to lose focus and get overwhelmed by all the choices. It takes maturity and willpower to go slowly, be patient, and not declare the yarn done until it’s exactly what you want. 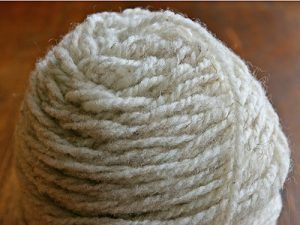 When Jared Flood took the keys to the candy store, he knew exactly what he wanted: a fine and flexible lofty woolen-spun yarn made entirely in the U.S. from the wool of American sheep—and from breeds developed in the U.S., no less. Working with the historic Harrisville woolen mill in New Hampshire, he first sourced fibers from Targhee and Columbia sheep that graze on the western U.S. ranges.

The fibers were then scoured, dyed, and carefully blended together to create 17 different colors—not dunk-dyed unidimensional solids, but gently nuanced heathers built upon at least two, sometimes three or more different hues. The blended fibers were then spun woolen, wound into 140-yard hanks, and sold through Brooklyn Tweed as well as at nine flagship retailers in the U.S. 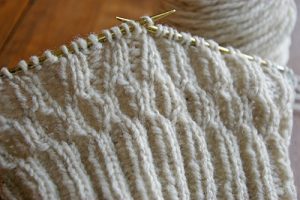 Shelter is a simple yarn that embodies all that’s lovely about woolen spinning. The fibers are gently teased into general cohesion before being pulled and twisted into strands, two of which are plied together to make the final yarn. The Targhee provides soft, lofty sponginess while the Columbia anchors the blend with a touch more strength and a hint of luster.

If you’re familiar with other farm yarns, Shelter may bring to mind Beaverslide Dry Goods or even Imperial Stock Ranch, with a dusting of Marr Haven [a beloved yarn that’s no longer available] thrown in—but at a finer gauge than all three, and in more colors.

While Shelter looks like the farm yarns of yore, I was disconcerted by its total lack of lanolin fragrance. I can’t quite place the scent my skeins did have, but it definitely had perfume overtones of a woolwash, perhaps. The yarn does have the occasional bits of vegetation that speak to the yarn’s proximity to the source. In two places I also pulled out tiny bits of shredded plastic, most likely from the bales in which the wool was shipped to the mill.

Knitting with Shelter is a distinctly pleasurable experience. The yarn willingly holds my hand and its two plies are perfectly united in a way that does not snag or pose problems on the needles. Within a few rows I was able to knit by touch alone—even in ribbing and even with my pointy-tipped Addi Lace Click prototypes—without any issues.

But as beautiful as the yarn is for textured stitches, it’s even better suited to stranded colorwork—although true colorwork geeks will likely look for more colors than the current palette offers.

The yarn’s halo (even before washing) helps conceal any colors running along the back of the work. And, as an added benefit, the jumbled woolen surface acts as Velcro to secure any stitches you may inadvertently drop. In a smoother yarn, those stitches would quickly run all the way down to your cast-on edge. But here, any dropped stitches will simply sit tight and wait for your return. 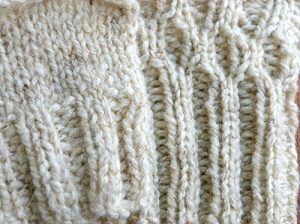 With all woolen-spun yarns, my favorite moment is when I drop the finished fabric into its warm soapy bath. At long last, relief has come. Ever since the fibers began their journey into yarn, they’ve been held under some kind of tension—while being spun, while being dyed, while being wound into skeins, and even while being knit onto our needles.

Shelter is no different. As the fibers absorbed their warm soapy water, they finally had a chance to relax and stretch their legs. Any areas that were uncomfortable or otherwise distressed during processing finally got to move about and find a more comfortable position. When my swatch finally dried (washed at left, unwashed at right), it had bloomed into a full and cohesive piece of fabric. Any lingering listlessness was gone.

One of the most common questions I’ve been asked about Shelter is if it’s scratchy. That’s a hard question to answer because the measure of softness is subjective and differs greatly from person to person. Speaking in strict numbers, the Targhee averages 21 to 25 microns (one micron equals one millionth of a millimeter) and the Columbia 24 to 30 microns. To put this in context, a good cashmere should be 16 microns, while Merino can range from 17 to 22.

To my touch, Shelter is not itchy or scratchy (then again, I have a bias toward wool). It has a distinct but well-mannered presence. But, unlike its finer cousins, such as Merino and Cormo, Shelter isn’t afraid to speak its mind. Under pressure, its fibers join forces and fight back with a unified front. When the fibers finally do surrender, they do so in small clusters that are willing to go when pulled.

As with any good woolen-spun yarn, Shelter has quite a bit of air in it. A yarn’s warmth is dictated by the amount of still air it holds, making Shelter an excellent insulator for cold-weather wear. The abundance of air and springy fibers also makes Shelter quite adaptable to multiple gauges. The fibers will simply expand or contract to fill whatever space you give them. Such adaptability makes Shelter suited for a wider variety of patterns—though you’ll want to look at Jared’s patterns first, since many of them were conceived expressly for this yarn.

Note: Since this review was published in 2010, complaints have emerged about Shelter breaking in people’s hands. Not when tugged or yanked, but under everyday knitting use—and even more so after any amount of frogging. I didn’t mention this in my review for the simple reason that the yarn I reviewed had no such problems. But it would appear that subsequent batches after the first release have had enough issues for this to be a consistent complaint online. Brooklyn Tweed has publicly maintained that, “The airy ply, and the shorter wool staple length from Targhee-Columbia sheep, result in a fabric that will bloom once blocked, but can require a gentler touch while knitting with it.” (Quoted from a post by customer service rep Christina Rondepierre on Ravelry in fall 2016.)

According to breed standards, Targhee should have a staple of 3 to 5 inches, Columbia between 3 1/2 and 5 inches, putting both fibers on the long end of what a woolen spinning system can actually handle. This has led to speculation that it’s not the breed itself that’s the issue, but the quality of fibers Brooklyn Tweed is able to source in sufficient quantities to maintain a healthy supply for its customers. Whatever the reason, be aware that breaking has been reported as an issue. It’s also worth noting that, while this is a relatively well-known complaint, it hasn’t seemed to hurt Shelter’s popularity in the least. If you’ve ever stood in front of a wall of these yarns in the wild, you’ll understand why.

Shelter is a $12 reminder of why I love yarn. (As of 2016, it’s now a $13.25 reminder of why I love yarn.) Shelter also tells a great story about a young photographer and knitwear designer who decided he’d make a yarn of his own—and he actually did. Not just any yarn but a good one, made from American-raised wool and spun by good people who are working to keep alive a tradition that our global economy is likely to make obsolete. Jared’s pattern support is an integral part of what makes this yarn special.

It would’ve been much easier to slap his name on a generic yarn from one of the massive mills abroad—and he would’ve kept a lot more from each skein sold. But Jared chose a more challenging path, from sourcing quality fibers from domestic farms and having them scoured properly to finding the right combinations for each heathered color and getting the yarn’s thickness, twist, and ply just right. This is not an off-the-rack yarn.

If you look at the designs Jared has published over the years, most of which have a fine but earthy, heathered element to them; and even at the name he’s been using for his business all these years—”Brooklyn Tweed“—you’ll agree that this heathered, woolen-spun, dare I say almost tweedy yarn is a perfectly logical and fitting next piece in Jared’s creative puzzle.

Yarn name: Shelter
Manufacturer: Spun at Harrisville for Brooklyn Tweed
Fiber content: 100% wool (Targhee and Columbia)
Gauge: 4.25 to 5 stitches per inch on US 7-9 (4.5-5.5mm) needles
Average retail price: $12.50/skein (as of 2016, Shelter is now $13.25 per skein)
Where to buy online: You can buy Shelter directly from Brooklyn Tweed or from one of the flagship retail stores
Weight/yardage per skein: 50g/ 140 yards (128m)
Country of origin: USA
Manufacturer’s suggested wash method: None given. I recommend a gentle handwash in lukewarm water with a mild soap, followed by a rinse in lukewarm water and a nice long rest on a towel
Review date: 10/7/10
Color used in review: 12 (Fossil)
Wholesale distributor: Contact Brooklyn Tweed directly
Source of review yarn: Jared Flood