Just 60 miles north of New York is a 100-acre farm populated with some extraordinary sheep. These animals are all direct descendants of five prize-winning Saxon Merino studs that Eugene Wyatt flew to the U.S. from Australia in 1990, just four years after Australia lifted the ban on their exportation.

Among the many varieties of Merino that exist, Saxon produce some of the finest, most luxurious fibers. The Saxon breed originated from a group of Merino sheep that Ferdinand IV of Spain sent to his cousin Prince Xavier the Elector of Saxony in 1765 and 1774—more than a decade before Merino were sent to the Royal Farm at Rambouillet, and at a time when the exportation of Merino from Spain was otherwise punishable by death.

Those sheep were carefully cross-bred with Saxon sheep to produce an animal better suited to Germany’s climate while still growing a fine, dense, bright-white fleece. These so-called Saxon Merino were then imported to Australia starting in the early 1820s, and much work has been done since then to preserve the original bloodlines.

Today, more than 20 years after Eugene first greeted those five rams at the airport, his flock now numbers 400—not including 225 lambs that were born this spring alone. Even though a certain number of lambs are reserved for the freezer each year, Eugene still has a lot of very fine wool on his hands. Lucky for us, he knows what to do with it. 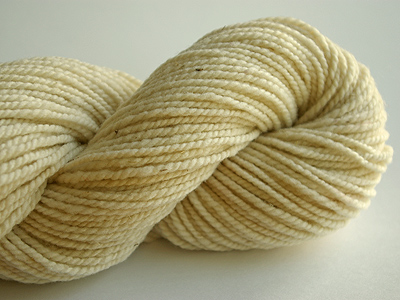 The raw fibers go to Green Mountain Spinnery in Vermont, where they are gently processed and spun into four different weights of yarn: a plump singles bulky, a slightly finer singles worsted-weight, a two-ply sport-weight yarn (reviewed here), and a two-ply lace.

The yarns are returned to Eugene, hand-dyed on the farm either with natural dyestuff or acid dyes, and then sold in the farm’s online store and at the Greenmarket in New York’s Union Square every Saturday. In addition to the dyed yarns, Eugene also offers them in their pure, undyed form, and that’s what I show here.

Not only is Eugene a knowledgeable farmer and a skilled hand-dyer, but he also is a fine writer and storyteller. His Catskill Merino Sheep blog is a must-read. One week he quotes Proust or waxes poetic about the color of the spring grass, then the next week he explains how you can analyze lamb droppings for parasites under a high-power microscope. His Twitter feed is a similarly engaging adventure. I encourage you to read both. 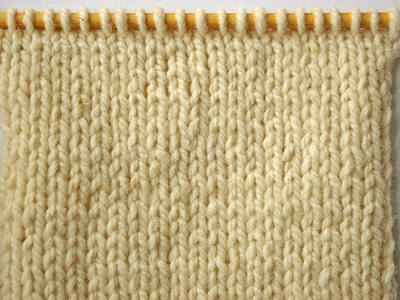 It’s clear that Eugene wanted to retain as much of the on-the-sheep feeling as possible. All his yarns are doughy pillows of softness. Their minimal processing means that the fibers have not been treated with chemicals or burned to remove chaff and straw—which means the fibers retain their natural succulence as well as some easily removed bits of vegetable matter. There is no heavy scent of lanolin, however.

The yarn knit up swiftly and easily without any challenges, snags, or even knots. The two plies have good cohesion, letting me knit easily by touch alone on knit and purl rows without splitting. My stockinette had a faint hint of the irregular, pebbly effect you get from two-ply yarns. Some people find this effect disappointing in stockinette, but it renders garter stitch and lace motifs with extraordinary beauty.

The slight lumpiness of my swatch was also a clear indication that this super-springy, high-crimp yarn was desperate for a warm-water bath. I trusted that some of the excess energy would be released after the wash. 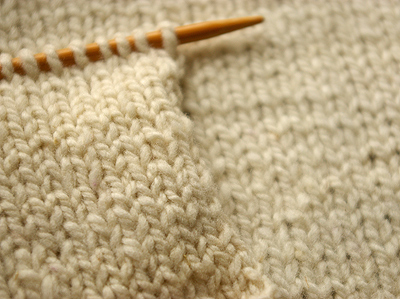 Because there was so much energy and lumpiness in my swatch, I let it soak in its warm-water bath for a few extra minutes before rinsing. The results were relaxed, poofy, and exquisite.

While some inevitable lumpiness remained, the fabric had become plump and cohesive, with a lovely, come-hither surface bloom (unwashed at left, washed at right).

I measured no change in stitch or row gauge.

The fineness of these fibers means that they’re innately a bit more fragile and thus susceptible to abrasion. Here’s where I worried about the bulkier but oh-so-tempting singles. They just can’t have enough twist or balance to hold together well under significant abrasion. Even in skein form, I could see tiny neps had made their way into the yarn.

Mind you, maybe that’s not the point. Those same qualities make the singles extraordinarily soft, natural, and poofy—the kind of material you’d want against your skin when you sleep. Its softness, warmth, and bulkiness make it a capital-P perfect yarn for quick-knitting scarves and hats, which don’t generally see the kind of wear a sweater would.

But for this review, I focused on the two-ply, which has a little more cohesion and structure. Ironically, it feels a hint less soft than the singles, but that’s an illusion caused by the plying.

Even with two plies instead of one, though, the ultimate truth is that this yarn is eventually going to pill. That is the very nature of the beast—unless you want those fibers tamed by greater twist and tighter plies. That would detract from the very same plump, earthy softness that drew you to the yarn in the first place.

, if you don’t have one already, and simply enjoy wearing whatever it is that you end up making. One skein of sort-weight (reviewed here) will get you a lovely hat (for $17), two will make a substantial scarf (for $34), and nine will give you a medium-sized women’s pullover ($153). For just a few extra dollars you can get one of their luscious hand-dyed solid skeins instead. Such prices are overly generous for such a fine grade of fiber, especially one that has been so tenderly brought into this world.

This is the ultimate kind of farm yarn. It both is something and it represents something. It tells a story, and it comes from people who care deeply about their animals, from their quality of life to the quality of fiber and meat that they produce; people who go so far as to fashion a tiny splint for a lamb’s broken leg, name a sheep after an abstract expressionist, or marvel at their Australian kelpie’s amazing sense of geometry when at work.

These are businesses worth supporting. And the fact that they produce such a lovely, genuine product—and at such a low price no less—makes it easy to do.

Yarn name: Saxon Merino Sport Undyed
Manufacturer: Catskill Merino
Fiber content 100% Saxon Merino wool
Gauge: None given. I’d suggest aiming for 5.25-6 sts per inch on US 5-7 needles and stopping when you get a fabric you like.
Average retail price: $17/skein [Miraculously, the price per skein has only gone up by $1 since 2012.]
Where to buy online: Catskill Merino
Weight/yardage per skein: 2 oz / 185 yards (169m)
(The dyed is listed at 175 yards [160m])
Country of origin: United States (raised in NY, spun in VT)
Manufacturer’s suggested wash method: None given. I’d recommend handwash in lukewarm water with a gentle soap, keeping agitation to a minimum. Rinse in lukewarm water, squeeze excess water, and lay flat on a towel to dry.
Review date: 5/20/10
Prices updated 12/5/2012
Color used in review: Undyed
Wholesale distributor: Contact Catskill Merino directly
Source of review yarn: Sent by Catskill Merino