One of the most useful gifts you can give a knitter is a needlesizer. Oh sure, a few hundred yards of qiviut would be nice, but like a good knife or a Phillip’s screwdriver, a needlesizer is one of those gadgets we always need.

Why? Well, in our ideal world knitting needles are clearly labeled, but in the real needles often have no size markings at all. Perhaps they were never marked to begin with (as is the case with the Knit Picks Options and Harmony needles), or, more likely, the sizes simply rubbed off from years of use.

Determining the size of an unmarked needle is not something you want to eyeball. You really need the right tool, and a needlesizer is it.

No matter who makes it, most needlesizers are very simple. They have a series of holes that correspond to standard knitting needle sizes. Poke your needle through the holes until you find the perfect fit, and you’ll know what size needle it is.

Most needlesizers are pretty basic affairs—pre-printed plastic cards in varying sizes and thicknesses. A few years ago, Denyse Specktor shook things up with her The Big Yarn needle sizers, which came in both plastic and sterling and feature a series of tiny rings on a central post, like a jeweler’s ring sizer. 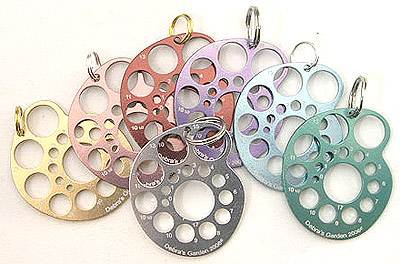 Now you have another option at your disposal in this ingenious little needlesizer pendant from Debra’s Garden. About as thick as a penny and measuring approximately 1 1/2 inches by 1 1/4 inches, it can double as a pendant, earrings, a key fob, or even a zipper pull.

It’s called the Needle Gauge Pendant, and it has holes for size 0 to 17 needles drilled in a seashell-like spiral. Numbers are laser etched next to each hole, and the numbers represent US sizes only—no metrics. The location of the numbers shifts as you work along the spiral, but it’s pretty easy to figure out which hole corresponds to which number.

The Needle Gauge Pendant retails for $16 and is available directly from Debra’s Garden or from Dream Weaver Yarns, which is where I bought the blue pendant you see in the above picture. Other colors include wine, green, lavender, light blue, teal, black, and red. 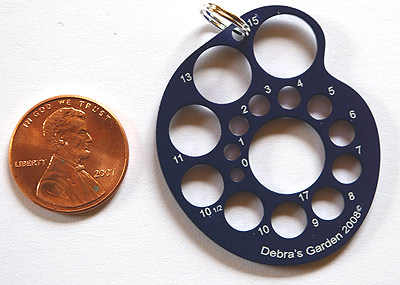 I only received my pendant earlier this week, so I can’t vouch for its long-term wearability. [As of 2017, the gauge pendant is still going strong.] I do know that I tried to bend it and couldn’t. And I tried to scratch it with various sharp metal objects and couldn’t. I didn’t have the heart to try a chainsaw, mind you, but I’m guessing most of our knitting bags are devoid of that kind of sharp object anyway.

A word of warning about the size 6. My Denise, ChiaoGoo, and Clover size six needles wouldn’t fit. They slid comfortably into the size 7 hole, mind you, but they’d have nothing to do with the 6. I should note that did all fit in in the size six slot in Big Yarn needlesizer.

This may actually be just the tip of an even bigger iceberg, because the one needle that did fit was my Signature needle—and Signature needles are among the most precisely calibrated needles on the market. This is because they come from a precision machine shop that also outfits airplanes and hospitals and other places where precision is more than just a matter of gauge or no gauge. So we may actually be dealing with a greater issue here—but it’s something to know if you use this tool.

And Then There Was Lace

Later the same year, Debra’s Garden released another pendant with both US and metric needle size markings, with an optional US crochet hook sizer (sizes B through O) and—sound the trumpets for fine-gauge knitters across the land—lace and sock gauges (with holes to measure US000/1.5mm to US6/4mm).

The price remains unchanged at $16. You can get utilitarian needle sizers for less, but they won’t give you a tool that doubles so well as jewelry, a key fob, or even a zipper pull; nor will they get you a tool made of a very durable metal that does not warp or crack, which most plastic needle sizers are prone to do.

Most knitters may not see a need for the finer gauge markings, since not everybody loves to work with size 000 needles. But the finer needles rarely have markings, and holes for measuring them would need to be extraordinarily precise—which lends itself to a well-made, highly calibrated metal sizer exactly like the one Debra’s Garden has given us.