I’ve always dreamed of seeing London in December. When I heard news that Pompom was having a Christmas party and pop-up indie yarn market in London, I decided to use this party as an excuse to cross the pond.

I reached out to friends and colleagues, who quickly helped fill every other spare moment of the trip.

During my five-day stay I barely scratched the surface of what London has to offer. But I want to tell you about the people I met during my travels—people who are leading the UK yarn movement forward in exciting, inspiring directions. 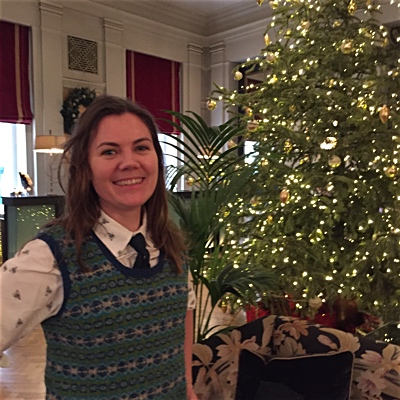 At the Edinburgh Yarn Festival earlier this year, Ysolda Teague had greeted me at my hotel. And so it seemed only fair that she was the first to greet me at my hotel at this visit, too, resplendent in her emerald green Fair Isle vest.

After a brief pause for her to publish a pattern from my hotel lobby, we wound our way through London to the English Tea Room at Brown’s Hotel, where we sat in overstuffed chairs, nibbled sandwiches with the crusts cut off, and discussed changes in the knitting world over the past 10 years. Ysolda has just announced her 2016 Ysolda Club, a good gift you might want to give yourself in the coming year. 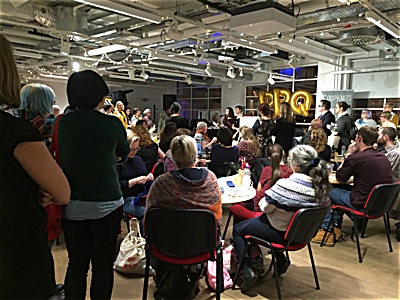 But the tea was just an appetizer for what happened next, as we headed to the legendary Foyles bookstore for the Pompom Christmas party. A glass elevator whisked us up to the top floor, a space that is reserved for private parties. We had live music and refreshments and plenty of tables in the middle for knitters to relax and sprawl. 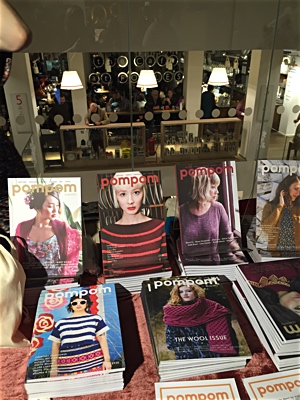 Pompom had a prominent table with back issues of their magazines as well as some accessories and copies of their first Pompom Press book, Fiona Alice’s Take Heart: A Transatlantic Knitting Journey. Through the glass walls behind their booth, you could look out over the rest of the bookstore. 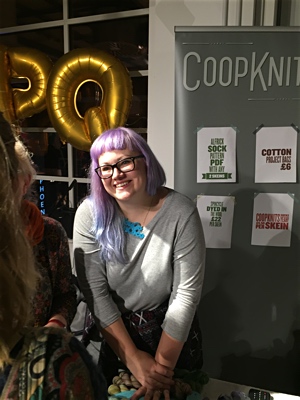 Vendors were set up around the perimeter of the room, and many were a crafty pairing of designer and yarn. There was Rainbow Heirloom Yarn and Tin Can Knits, A Yarn Story, The Island Wool Company, The Fibre Company, Leeleetea, and Easyknits. Rachel Coopey (at left) was also on hand with both her Coop Knits patterns and her Socks Yeah Yarn. 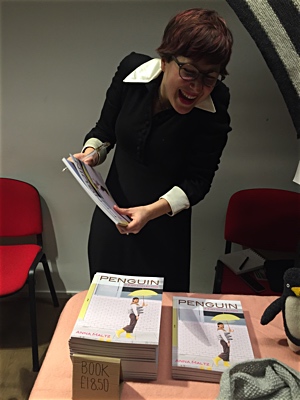 In a perpetually crowded corner of the room, Anna Maltz was showing off garments from her new book Penguin A Knit Collection, as well as signing and selling copies of the book itself. She was dressed in a penguin-inspired black-and-white button-up dress with white wing collars and bright white shoes. 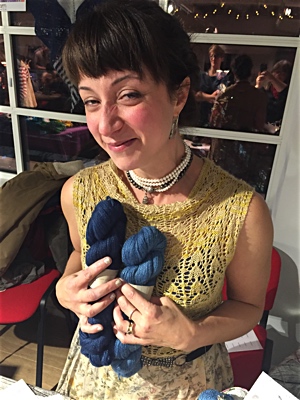 This is Linda, Canadian expat, dyer, and owner of Kettle Yarn Co. She gave me a deeply saturated skein of limited-edition indigo-dyed Exmoor Blueface/Gotland/silk yarn called Baskerville, which I’m hankering to swatch in the coming year. 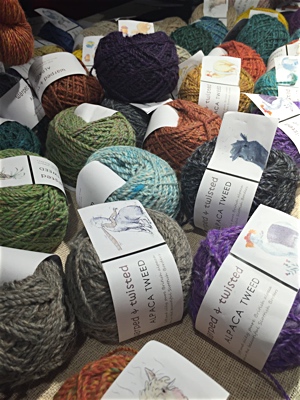 The Border Mill was there with a rainbow of skeins spun themselves, in a Z twist instead of the common S, and featuring domestic alpaca. They process the fibers by hand at their small mill in the Scottish Borders, explaining that they’ve been grown by “exuberant, mischievous beasties who love rolling in dust, splashing in puddles, and generally doing anything they can to get lots of vegetation and mud stuck in their lovely fleeces.” 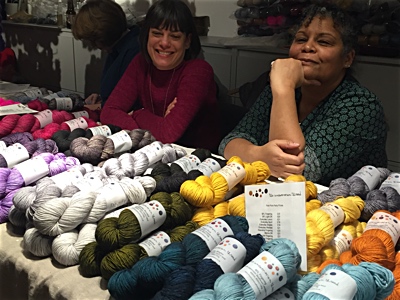 The Uncommon Thread was up from Brighton with a vibrant candy jar of gorgeous hand-dyed skeins in smooth, soft textures, many more of which I would encounter again when I went to Loop the next day.

Jo and Mica—the masterminds behind the Edinburgh Yarn Festival—had taken the train down from Edinburgh for the event. Stephen West also breezed in and out with luggage in tow. He stopped long enough to chat, sit and knit with folks, and pick up some Clara Yarn Cormo 3.0 I’d brought for the occasion. (“I have all these gorgeous colors of Hedgehog but I have no white,” he said.)

I also met Anna Feldman, the owner of London’s Wild and Woolly yarn shop that opened last year. Rather, I should say I met her again, because she’d been in my class at the 2010 Knit Nation. I regretted not having slotted time for a visit this time around. If you’re in the area, please do go and let me know what you think.

Speaking of Knit Nation, I still remember the gorgeous marketplace display by London LYS Loop. I vowed to visit the shop the next time I was in London. This being that next time, I contacted Loop’s owner Susan Cropper and we scheduled a time for me to read and sign books. 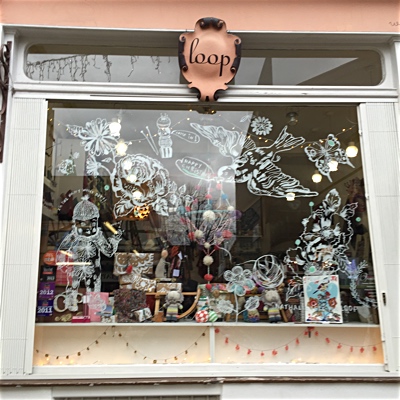 Loop sits in the middle of a narrow pedestrian street called Camden Passage. Perhaps because of its narrowness and all its dark nooks and crannies, Camden Passage used to be a less-than-savory part of town. No more. Loop sits in the center of it all like the crown jewel, occupying several floors of a building overlooking a small square where an antique vendor sold vintage crystal, silver, and china. (As I said, charming.) 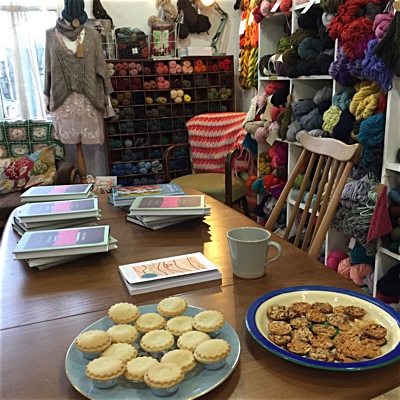 Visually, it is everything you could wish for in a yarn store. A small space that is jammed from floor to ceiling with gorgeous colors and textures of yarn.

It’s arranged by gauge, with the finer weights downstairs, heavier weights upstairs. A basement room is reserved for classes, and the second floor has a couch and open area for visiting dignitaries to hold readings, as I did. While the sun set outside the tall windows, I read passages from The Yarn Whisperer and previewed Knitlandia. We talked about wool and yarn. I met expats from all over, and we swapped stories about yarn and patterns, food and life. 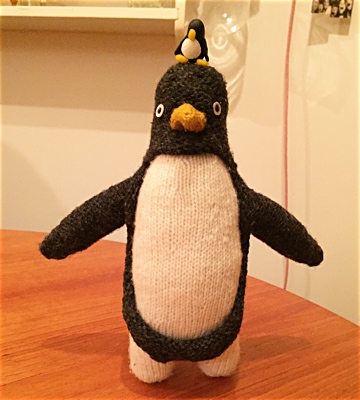 At the end of my talk, Tom van Deijnen (better known as Tom of Holland, the master of visible mending) whisked me off to Anna Maltz’s house for dinner. She’d been so swamped at the Pompom party that I hadn’t yet been able to fondle the samples from her book—which I did, before feasting on a tiny marzipan penguin that she’d saved from her book release party (shown here with her Pinglewin penguin).

An artist by trade, Anna had worked with Meredith Ramirez to bring the Ricefield Collective to life. She is also known (and loved) for her Instagram account. Wherever she goes, Anna manages to find and photograph the most remarkable handknits (being worn by random people on the street) and also has an uncanny ability to match yarns to the colorful cars of London. In short, she is a bright light, a lively spirit, and a pleasure to follow. 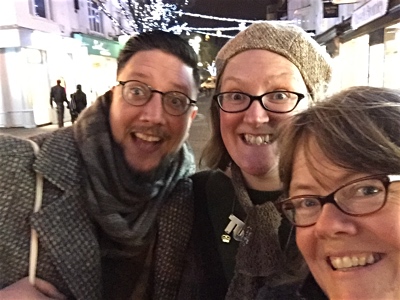 The next day I returned with Tom to his home in Brighton, where we were joined by knitter, podcaster, and sound artist Felicity Ford. Her Knitsonik Stranded Colourwork Sourcebook may be the very best book out there for learning how to translate what you see around you—whether it’s trees, streets, or even fruitcake—into knitted fabric. She holds a PhD on the domestic soundscape and, when not working on performances and museum installations, and when not coordinating Wovember, Ford also happens to love making buttons and badges out of British tweed yarns. She’s another bright light with a very unique eye and unexpected path that’s worth following. 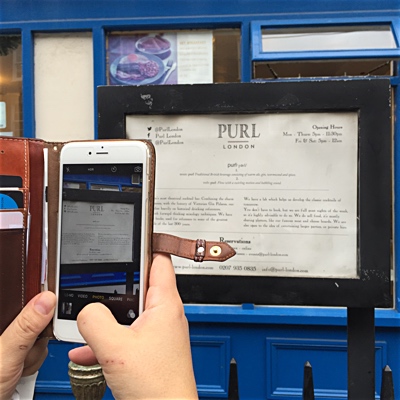 On my last morning in London, I thought it only fair to have breakfast with the woman responsible for my previous two visits to London: Alice Yu. The founder of Knit Nation has recently returned from Hong Kong and is now writing an urban fantasy novel. We both paused in front of a big sign marked “PURL,” only to discover that it wasn’t a yarn store, it was a pub. “That’s so wrong,” Alice said while snapping this picture. 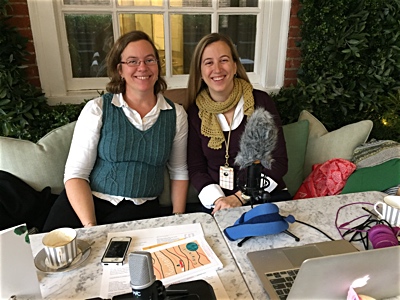 Then, I raced back to my hotel to meet with Allison and Rachel, the two voices (and brains) behind the London podcast Yarn in the City. We talked about all sorts of things, from Knitlandia to cross-country moves and my philosophy about holiday knitting. Much to our mutual surprise, it turns out Allison’s grandparents lived in my tiny Maine town and she spent her summers there as a kid. Six degrees of separation indeed. 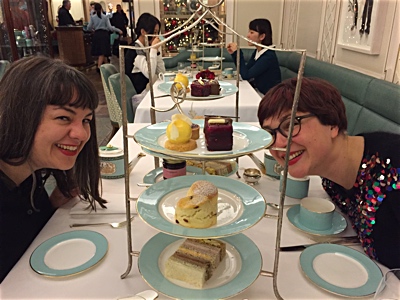 By now I was pretty much running on fumes but had one more very important appointment to keep before I would fly home. I walked through Piccadilly Circus until I reached the most ornate windows of all, those of Fortnum and Mason. Inside and upstairs at the Diamond Jubilee Tea Salon, I met Anna Maltz again, this time accompanied by Rachel Atkinson, for a proper afternoon tea.

If you love to read and haven’t done so already, you’ll want to bookmark Rachel’s blog (My Life in Knitwear). Rachel is a knitwear designer and much-in-demand technical editor who also happens to love ballet, good food, and wool. That last one won’t surprise you when you find out her father has a flock of Hebridean sheep in York.

Recently Rachel wrote some very compelling, challenging words about the realities of the British wool market. Frustrated by the prices her dad and other small farmers were getting from the British Wool Marketing Board for their fleece, and also by the apparent lack of attention to British wool within the UK’s popular Campaign for Wool, Rachel has committed to buy the entire 2015 clip from her father’s flock and make it into yarn herself. Hers is an ambitious undertaking, and one I look forward to supporting.

It’s an odd and rather wonderful thing to travel thousands of miles to be with people you know only from the Internet. But these weren’t just any random people, they were knitters. And that, my friends, makes all the difference.