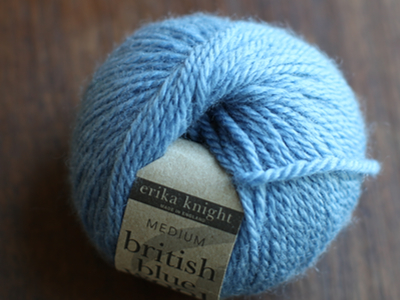 Erika Knight is the consummate knitwear designer. Teacher, lecturer, and author of countless books, she’s been a fixture in the much-vaunted Rowan designer line-up for years. Not only does she know her technique, but she knows her yarn too.

After years of paying her dues, the British designer finally got the opportunity to create her own line of yarn from scratch. This charming little dumpling of a skein, called British Blue Wool, is a fixture in the collection.

The yarn’s name comes not from the color (although it did inspire me to buy a blue skein for this review) but from the breed: This is 100% Bluefaced Leicester wool that’s been sourced in Britain and expertly spun at the legendary Laxtons mill in Yorkshire. It’s the yarn pedigree equivalent of having gone to Eton and Oxford.

British Blue Wool is composed of three strands of combed, twisted wool that are plied together at a medium angle. It’s smooth and even with a hint of halo. 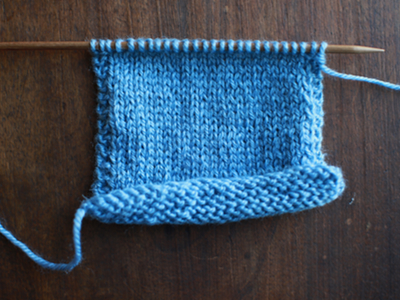 Here, a few facts about Bluefaced Leicester (or BFL as it’s called) will come in handy. BFL is the finest of the British longwools, a category of sheep whose wool grows in long, curly, lustrous ringlets. Merino, by comparison, grows shorter, denser, and finer fiber.

Some longwool breeds have more luster (they’re called “luster longwools”) while others have less and are sometimes called “demiluster.” All longwools have, by the very nature of their name, a longer staple length than you’ll find in the finewools. With staple length comes strength, but we’ll get to that in the Wearing section.

An easygoing yarn, British Blue Wool was cheerful in my hands and on the needles. Despite the general reputation for longwools to be dense and not so springy, this yarn has marvelous bounce to it. Still, it is somewhat dense, giving less leeway in gauge.

I swatched with pointy-tipped needles to see just how bad the snagging might be. A spare ply got snagged just a few times before my hands adjusted. A quick horizontal and vertical tug on the fabric brought the stretched ply back in line with the others.

Soon it was smooth, contented sailing on knit and purl rows alike. I was able to knit by touch alone and not miss a stitch, but I’ll be honest: My unblocked swatch looked a little lumpy. I was eager to see how much of this would change after the wash.

This yarn is machine-washable. My fingers picked up on this pretty quickly, but they didn’t rebel against it—something they normally do. The wool is lovely.

But because the yarn is machine-washable, I didn’t coddle my swatch in its warm soapy bath. With vigorous swishing and squeezing, I finally felt the fabric surrender to the water. A faint poof of light blue was visible in the wash, but it rinsed clear immediately.

My blocked swatch still looked somewhat limp and sulky, which is to be expected with any yarn made of longer fibers with more open crimp. I nudged the edges into place and let the air do its work.

The swatch dried into a gorgeous piece of fabric. The wonkiness had subsided, my stitches had evened out nicely. Along the surface, the stray fiber ends had come loose to produce an elegant, come-hither halo.

While the age and quality of the flock will have some bearing on this, BFL is considered the finest of the British longwools. It’s no Merino, but it has some things going for it that Merino doesn’t. For starters, the generous staple length of BFL translates into great wearability for any day-to-day garment. And from an aesthetic perspective, BFL has a subtle luster to it that gives elegance without a sense of ostentation.

These pros come at the con of sponginess and “I can’t believe I’m wearing wool” softness. But to call this yarn itchy would not only be inaccurate but also unjust. Against the skin, the fabric has a presence without blatant irritation. Unless you’re a Princess and the Pea type, you won’t feel a prickle—but you will feel the reassuring presence of knitted fabric.

After a significant period of friction failed to produce anything beyond a raised halo on the fabric surface, I finally gave up trying to make the yarn pill.

British Blue Wool is a lovely, old-fashioned wool yarn. It begs to become that everyday sweater that quickly becomes your second skin. While the 25g put-up is adorable and helpful for colorwork, it could quickly get tedious for larger projects. On the upside, it’s a great opportunity to try out the Sailor’s Knot instead of having to darn dozens of ends between skeins.

You do sacrifice a tiny bit of succulence for machine-washability, something you may not even feel. But the fact that this yarn is machine-washable opens it up to a much bigger realm of knitting possibilities. In particular, it makes British Blue Wool ideal for that keepsake baby sweater or blankie, the one you’d like to give the new parents who don’t quite have time for handwashing.

The mechanics of the yarn are solid, it’s an even, well-balanced, beautifully constructed material. And the bigger picture surrounding the yarn is equally solid. Purchase one skein (or two, or 20, remember these are tiny 25g things) and you’re putting money toward the future of British wool, from sheep to shearer to scourer, spinner, and skein.