Most yarn companies like to launch with a full fleet of products in varying weights and textures. Ewe Ewe Yarns took the complete opposite approach. It launched in 2011 with just one yarn: Wooly Worsted Merino. It’s like opening a bakery with only one kind of cake in the case. Better be a good cake. 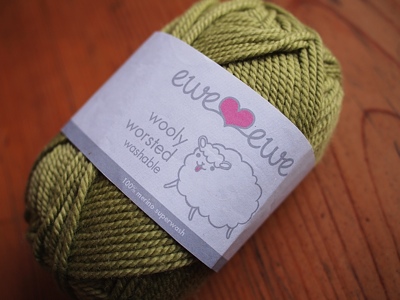 The premise of Ewe Ewe is simple: Not all knitters are comfortable with rougher yarns. And not all knitters like to hand-wash their garments. Wooly Worsted hits that need smack-dab on the head, albeit gently, with a worsted-weight superwash wool made from a soft and spongy Australian Merino. The yarn’s sweet spot is baby garb, but it also works brilliantly for gifts where you can’t be there to guard against the accidental machine-wash.

Wooly Worsted is spun in Italy of Australian Merino fibers that have been treated for machine washability. The microscopic scales covering the surface of the wool fibers have been gently nibbled off with enzymes. When dunked in warm soapy water and sloshed vigorously, your Ewe Ewe garment should not felt.

The yarn is currently available in seven colors, all of deeply saturated hues reminiscent of a Frida Kahlo painting.

Between the one-yarn offering and the limited color range, Ewe Ewe Yarns is an improbable venture. That’s what I thought when I first got a sample skein. Yet more than a year later, this yarn still beckons me for a swatching. There’s something here, something between the yarn’s happy simplicity and its plush, spongy constitution. 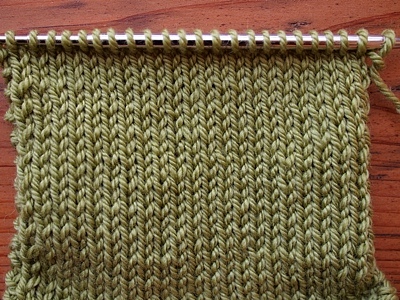 This is the Charmin of yarns. The skein is intensely squeezable; the yarn, springy like a bungee cord. Knitting was swift and easy. I used the Addi Turbo Lace Click Interchangeables, whose pointy tip is reasonable without being dangerous, and encountered no snags whatsoever. Within a few rows I was knitting and purling by touch alone.

Wooly Worsted is composed of three tightly twisted, perpendicularly plied strands of fiber. It’s a round yarn, almost like spaghetti. The stitches don’t blend with one-another in the way a fuzzy woolen-spun yarn would. Instead, they give crisp stitch definition and high relief to everything, from cables to ribbing. Because the stitches are so distinct from one-another, be careful with stranded colorwork. With no halo to hide them, the colors running behind your stitches may occasionally peek through. 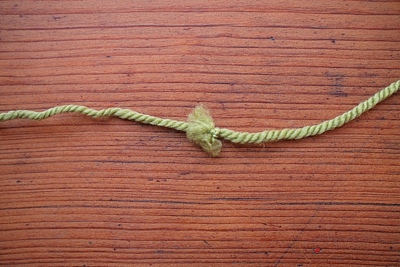 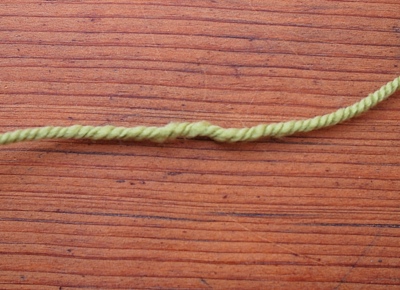 The dense, worsted-spun Merino fibers in this yarn took quite a while before they became fully saturated with water. Eventually the swatch relaxed and surrendered to the bath.

My swatch, which had been tight and curling on the needles, stretched out on its towel and dried with a faint left-leaning slant. The yarn had kinked up on itself a few times while I was knitting and I failed to un-kink it.

Machine-washable wools are notorious for stretching in the wash, the reason being that their fibers no longer have protruding scales to provide surface friction (which, in turn, helps hold the fibers together in their yarn and fabric). My unwashed swatch had a gauge of 5 stitches and 7 rows per inch. Once washed and blocked, the gauge changed to 4.75 stitches per inch and approximately 6.5 rows per inch. Do swatch and check this before embarking on any significant project where sizing will be an issue.

The real skein appeal in Wooly Worsted is its spongy disposition and extremely soft touch. The drawback? The finer a fiber’s diameter, the more easily it can snap when subject to abrasion. Snapped fibers, along with insufficient twist and protruding loose ends, lead to pilling.

To its credit, Wooly Worsted has been given three tightly twisted plies, which aid greatly in durability. The fibers have also been prepared in the smoother worsted preparation to minimize those protruding ends. This, alas, also minimizes any come-hither halo.

After a basic amount of vigorous abrasion, my swatch began to blur. With more abrasion, the blur became a faint fog over the fabric surface. After a bit more unforgiving friction, the pills arrived. They were fairly deep-rooted, so I snipped them off with scissors to avoid disturbing the fibers around them.

The handknitting market seems to have a sweet spot for worsted-weight wools. Something about their thickness pleases us—it’s fast-knitting yet still fine enough to allow for stitch nuance. Witness the success of Cascade 220 and Quince Lark.

Cascade 220 has more than 90 colors and Lark a still-impressive 41. In terms of washability, Cascade 220 also offers a machine-washable option, Quince does not. Currently the vast majority of the world’s machine-washable wool processing takes place in China, with some in Peru and–as of 2016–one small facility in the United States.

Wooly Worsted may only come in seven colors [that number has risen to 20 as of 2016], but its fine fibers stand out from the competition, providing a softer hand to the knitter and the wearer.

I only wish the yarn came in larger skeins, say, 100g instead of 50g. Perhaps it’s just psychological, but I enjoy knitting with a full skein of yarn, just like I enjoy driving the car with a full tank of gas. As soon as that gas gauge starts to dip, my mind can’t fully relax. I’m always checking to make sure I have enough. The same was true with my swatches.

Then again, if the 50g skeins retail for $9 (up to $11 as of 2016), that’d put the tab for a bigger skein at $18—and I don’t know how many people would be willing to pay $18 for a 190-yard skein of wool yarn. Hand-dyed, maybe. Blended with silk, maybe. But superwash Merino, no matter that it was spun at an Italian mill? That might limit this yarn’s audience.

Fortunately, you can do plenty of things with just one or two skeins. Ewe Ewe has plenty of accessory patterns including cowls, scarves, mitts, and hats. The yarn’s bright, soft, colorful, and machine-washable constitution makes it ideal for babies and children. Considering that they are growing, children won’t mind if their sweater grows a little with them.