Restaurants sometimes offer a house wine that’s of decent quality, reasonably priced, and available by the glass. Some yarn shops offer the knitterly equivalent, their own “house” yarn. And just like house wines, some are more memorable than others. 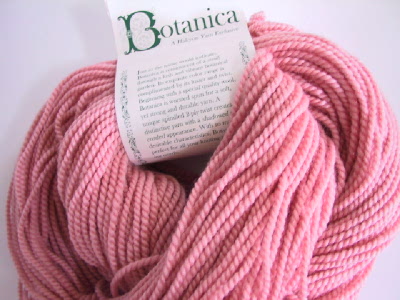 Halcyon Yarn is one of the most venerable mail-order fiber shops in this country. For decades it has served both knitting novices and serious fiber fanatics who design, spin, dye, weave, knit, crochet, tat, hook, and felt with abandon.

With a springy hand, brilliant luster, and sturdy constitution, Botanica is perfectly suited to both weavers and knitters alike. The fibers are given a particularly spiralled two-ply twist that results in a corded appearance that resembles a strand of pearls.

Currently 46 colors are available; I used color #24 for this review. 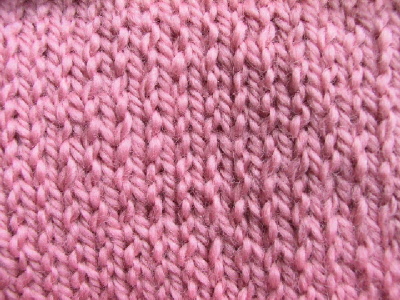 All that twist gave Botanica a mind of its own. Depending on whether I was completing a knit or purl row, the yarn would twist up on itself, requiring periodic dangling to unspin.

I also had to adjust my tension several times before I felt confident that the yarn was grabbing my right needle without being pulled too tight in its loops.

Because the yarn was knit under a relative amount of tension, the two plies weren’t as much trouble as I’d worried they would be. Only once did I snag the yarn, and it was due to my own impatience more than anything else.

I was able to knit by touch alone without incident, completing several inches of swatch while driving the car home from the post office. (Note: Kids don’t try this at home!)

The yarn’s two-ply construction gave my stitches a soft textured appearance similar to that of a coral reef. Tugging the swatches back and forth, to and fro, gradually I was able to smooth out inconsistent areas.

My swatches stayed tight and firm, even when fully saturated with warm soapy water. The color did not bleed, nor did the fibers show any desire to full from the agitation.

The stitch definition remained precise and almost sculptural, with only a minimal amount of surface fiber relaxation. And with modest blocking, the swatches assumed a perfect square shape.

Because of its strength and durability, I consider Botanica appropriate for just about anybody—athletic teenagers and sedentary folks alike.

The fiber’s luster and worsted spin won’t bloom during wash like its woolen-spun counterparts, but it’ll take twice as much abuse before beginning to pill. Plus, the yarn is also mothproofed, which lengthens its lifetime considerably.

On the softness scale, Botanica is soft but it’s no Merino. Sensitive individuals might want to wear a layer between the garment and their skin.

Botanica isn’t one of those raw, homespun-type house yarns that smells of lanolin and is speckled with occasional flecks of grass. The fiber has definitely been professionally processed both for dyeing and mothproofing, and the yarn’s loft and sponginess are reminiscent of a yeasted white bread.

But it does provide fantastic definition for any type of stitchwork, be it simple seed stitch, cables, or Guernsey patterning. The definition is highlighted by the fiber’s light-reflecting sheen and luster. The 46 colors add yet another dimension of creative possibilities.

Yarn name: Botanica (formerly Scottish Tapestry Wool)
Manufacturer: Halcyon Yarn
Fiber content: 100% wool
Gauge: 4 to 5 stitches per inch on US 6-8 needles
Average retail price: $14.50 / skein with volume discounts (When this review was published in 2002, the yarn retailed for $7.95 / skein)
Where to Buy Online: Halcyon Yarn
Weight/Yardage per Skein: 4 oz. / 160 yards
Country of Origin: U.S.A. (Note: When I updated this review in 2017 I was not able to confirm this.)
Manufacturer’s suggested wash method: Hand wash with mild soap, spin dry in the washer or roll in towels and lay flat to dry.
Review date: 9/12/02, updated 1/11/17
Color used in review: #24
Source of review yarn: Purchased independently