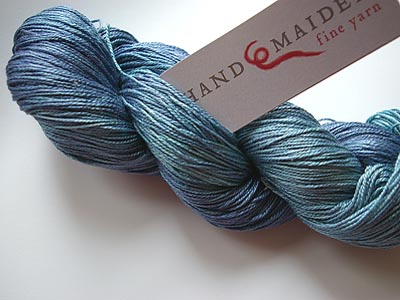 For months, knitters everywhere have waxed poetic about a new miracle yarn made from seaweed. Years of being pitched the latest “revolutionary” new products have made me a bit of a skeptic, but I finally succumbed. I had to see what Sea Silk was all about.

Sea Silk is a laceweight yarn from Hand Maiden, the luxury fiber arm of Canadian hand-dyer Fleece Artist. The yarn contains 70% silk and 30% SeaCell®, a relatively new fiber manufactured by the German company Zimmer AG. SeaCell® is actually composed of 95% lyocell, a fiber manufactured from the cellulose in wood pulp. (It’s sold in the U.S. under the trademark name Tencel—ring a bell?) The lyocell fiber is then “activated” by 5% seaweed.

Zimmer AG claims that the seaweed and its trace elements of calcium, magnesium, and vitamin E are naturally released onto the skin of the wearer. Lacking my own laboratory I can’t really address those claims or offer suggestions as to how long those trace elements might remain in the fiber or how they might be affected during the dyeing and washing process, but there you have the official story of SeaCell®. If there’s 5% seaweed in SeaCell®, and 30% SeaCell® in Sea Silk, I calculate (correct me if I’m wrong) that Sea Silk has about 1.5% seaweed in it.

Eager to see if the yarn was worth the fuss, I cast on and started testing. 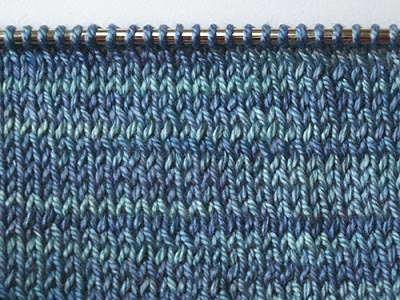 I began with a simple stockinette swatch to test the basics. Sea Silk is a strong yarn made of three plies that are mostly even and hold together well. Only once or twice did my sharp-tipped Knit Picks needles snag, and when they did, it was only on a wisp of a ply, not the ply itself. 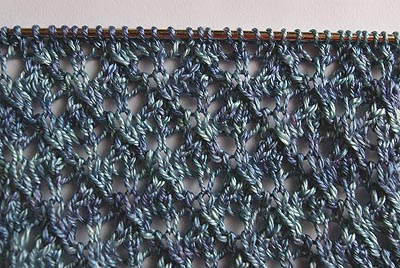 Visually, stockinette was a little dull and irregular for my taste. I could quickly tell that this yarn really wanted to be worked into more of a lace pattern. So I whipped out my Barbara Walker stitch dictionary and tried swatching her English Mesh Lace pattern.

The yarn invites lacework, so I played more with other stitches as well. Although both fibers are firm and inelastic, they cooperated easily with most of the typical lace maneuvers I tried—although the k5tog decrease was pushing it.

There is one peculiar trait to this yarn, however. I noticed it even as I was winding my hank into a ball before knitting. Periodically along the strand I found tiny wisps of white fiber, almost like pills. They were made more noticeable by the yarn’s otherwise smooth, fluid surface. Most were easy to remove, although some put up a fuss. I have no idea what these are, but they were definitely noticeable.

I dropped my swatches in a bath of warm, sudsy water and began to swish gently. I expected a hint of bleeding, but I got none. The swatches absorbed their water, relaxed slightly, rinsed easily, and blocked beautifully with just a little tugging here and there. I could’ve stretched them a bit more but chose to keep them pretty close to their pre-washed size.

There was no change in color saturation or in stitch gauge. I did notice that the wet swatches had a strong fragrance. The yarn already has a distinct silk scent that is dramatically amplified when the yarn is wet. Some people have said the yarn smells like the ocean, but—being familiar with silk and living on the coast—I speculate that it’s more likely the silk you’re smelling. As the swatches dried, the fragrance subsided a little.

With sustained friction, my swatches softened and relaxed tremendously in a way more reminiscent of cotton than silk. A delicate blur began to develop over the fabric surface—far more visible in the stockinette swatch than the lace one. Included in the blur were little noil-like clumps of fiber that were easily removed.

Despite the softened, blurred surface, the worn swatches still had an attractive sheen when held up in the sun. Only when you held the swatches up close could you see just how worn they really were.

Now that I’ve burst your bubble about how little seaweed is actually in this yarn, let me tell you the good news: It doesn’t matter. With or without the claimed healing powers of seaweed, this is a lovely yarn. It pairs two well-suited fibers: both silk and lyocell absorb dye readily and reflect it back with a brilliant shimmer, and both fibers have a smooth surface and relaxed drape.

Because of that smooth surface, brilliant shimmer, and relaxed drape, I see this yarn performing best in a simple openwork shawl—perhaps Evelyn Clark’s classic Flower Basket Shawl, Eunny Jang’s Print O The Wave stole, or even Polly Outhwaite’s Kiri shawl. Or you could peruse anything from Romi Hill or Sivia Harding. The gorgeous hand-dyed Hand Maiden colors benefit from the larger canvas of shawls where you can really see the interplay of the hues. And the fabric is soft, luminous, and relaxed—three qualities you want for anything wrapped around your shoulders.