Highlights from 2015 Knit City in Vancouver, BC 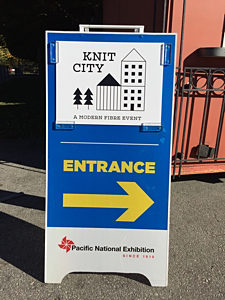 Until just four years ago, western Canada had no major annual knitting gathering of its own.

All that changed when two friends, Amanda Milne and Fiona McLean, began producing retreats and events under the Knit Social moniker. In just a relatively short time, their Vancouver gathering—Knit City—has grown into a world-class event that, just last weekend, welcomed just under 3,000 attendees.

The event took place at the PNE Forum in Hastings Park, which is part of the grounds of the Pacific National Exhibition. It’s an interesting space, not your average convention center or city park. There’s a relatively new skateboard area, beautifully manicured gardens, an ice hockey arena, and the oldest amusement park in Canada. 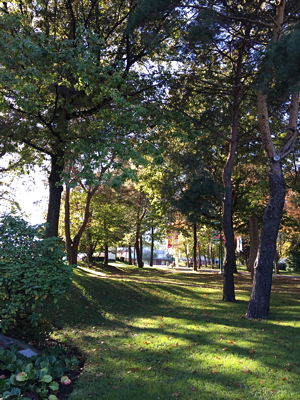 Sugar maples abounded, and the fall leaves were near their peak. Weather was surprisingly warm and sunny—a boon for someone who’d never seen Vancouver before, though a little frustrating for those who’d hoped for chillier knitting weather.

Part of what made this event so unusual was the fact that it only had four teachers from away—Stephanie Pearl-McPhee, Kate Atherley, Ragga Eiriksdottir, and myself, plus a handful of vendor demos and local instructors. Comparably sized gatherings in the U.S. tend to be heavy with teachers and workshops, as in 20 or more for the weekend.

Amanda and Fiona certainly could have accommodated more teachers and classes (and it’s possible they’ll be adding this in the future), but I found the intimacy refreshing. It also gave deeper emphasis to the marketplace as an equal gathering space. Fifty five remarkable vendors sold everything from buttons to spinning fiber, handmade clothing, jewelry, and, of course, yarn.

True to the spirit of knitting events everywhere in the world, marketplace lines formed outside an hour before opening time, and certain vendors were picked clean within the hour. 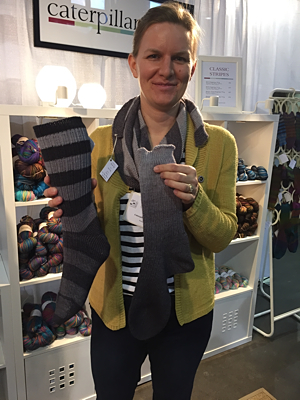 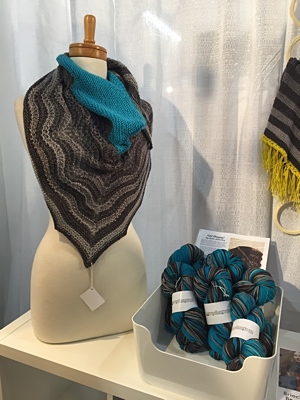 Certainly one of the main darlings of the show was Caterpillargreen Yarns. Catherine is a Vancouver Island-based engineer-turned-dyer who has managed to figure out exactly how to dye stripes and gradients so that they repeat in socks but also, and this is what blows most minds, shawls. Catherine is very, very smart, and her color sense is first-rate.

It was impossible to resist Kate Atherley’s Get Happy (shown above right) in a Caterpillar Green self-striping gradient colorway. 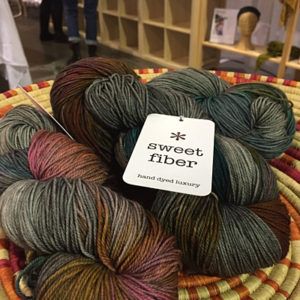 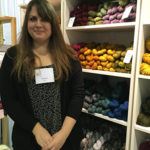 Another quickly swamped vendor was Sweet Fiber Yarns, and it wasn’t hard to see why. Working alone in her dye studio, Melissa Thompson builds shade upon shade to create skeins with depth and vibrancy. Her understanding of color makes more sense when you learn that she trained as a fine arts painter before turning to fiber.

At the show, she previewed a fabulously robust new yarn fittingly called Canadian, made from fibers grown, spun, and dyed in Canada. She also had a gorgeous sample of Thea Colman’s Amber Ale scarf, which uses her Cashmere DK. 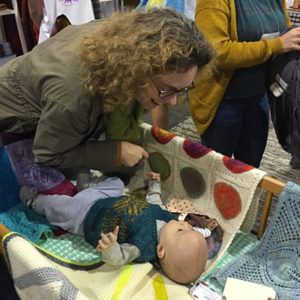 Stephanie Pearl-McPhee wows a baby in the Tin Can Knits booth.

British Columbia designers were also a popular presence at the show. Tin Can Knits—the brand of Alexa Ludeman and Emily Wessel—showcased some gorgeous blanket, shawl, and sweater patterns sized “from baby to big.”

Speaking of babies, the booth had one of those too, who immediately stole Stephanie Pearl-McPhee’s heart. (The baby is modeling the Peanut vest.) 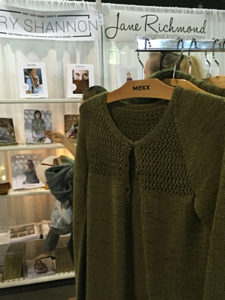 Sharing a booth were prolific local design stars Very Shannon (Shannon Cook) and Jane Richmond, with oodles of gorgeous samples for people to try on. Keep reading for a picture of their latest, most popular shawl in action. 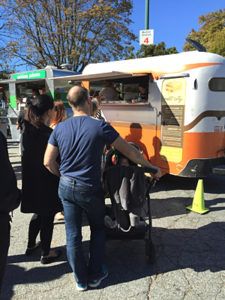 While the PNE Forum provided a perfectly decent food vendor within the marketplace, the real fun was in the parking lot directly outside.

Food trucks were set up for the event, selling everything from hot crispy pakoras to gourmet grilled-cheese sandwiches, Korean tacos, and poutine. The lines were long but worth it. For dessert, a smaller cart offered creme brulee—torched on site 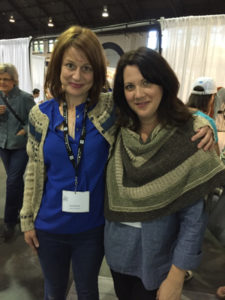 The foundation of this special event was the constant, steady hand of Fiona (at left) and Amanda (at right, modeling Shannon Cook’s Bradwayshawl, which she knit in Clara Yarn Shetland 1.0, with the green spots in Brooklyn Tweed Shelter).

Their seemingly unshakable calm and professionalism makes me think that even greater things are in store for western Canada. Plan your travel schedule accordingly.