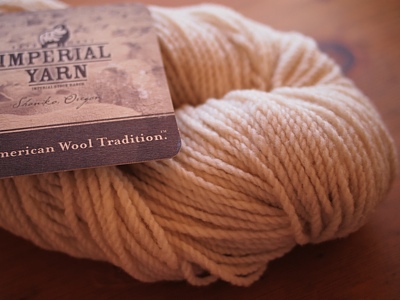 For more than 140 years, sheep have grazed along the Columbia Plateau in north central Oregon. Many of them were brought there by rancher Richard Rolland Hinton, a homesteader and respected sheepman whose early crossbreeding efforts helped develop what eventually became the Columbia sheep breed.

Although Hinton is long gone, his Imperial Stock Ranch continues to be home to Columbia sheep, cattle, and wheat under the careful eye of owners Jeanie and Dan Carver. The ranch now occupies 30,000 acres, and its headquarters have been designated a national historic district.

When I first reviewed this yarn in 2003, it was a bit of a rarity. Breed-specific wools were still on the horizon, most of them available only from the farms themselves. Fast-forward to 2012 and the market has changed. Rowan gave us its Pure Life British Sheep Breeds collection, while here in the U.S. Jared Flood tapped Columbia wool to serve as the foundation for his phenomenally successful Loft and Shelter yarns.

And Imperial Stock Ranch? Its yarns—of which there are now several pure wools and blends—are sold at yarn stores across the country under the Imperial Yarn label. The ranch has also procured gorgeous pattern support from the likes of Leigh Radford, Jean Lampe, and Annie Modesitt.

Imperial Yarn’s Columbia 2-Ply yarn is still mulespun at a small family mill in Canada using chemical-free, environmentally responsible techniques. This gentle processing retains much of the fiber’s natural softness and sheen, along with a faint spicy lanolin fragrance and bits of stray vegetable matter from the western rangelands. They are easily removed, and the effort, at least in my mind, is well worth it. Interestingly enough, two non-knitters both commented that the unwashed swatches had a dry, almost cottony feel to them. 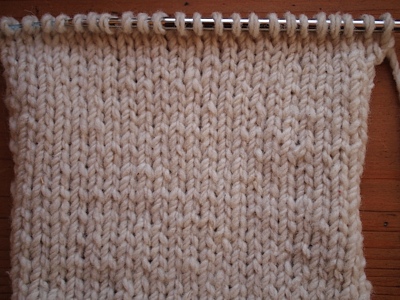 I love working with yarns like this one because their sponginess and elasticity are so forgiving on the hands. They also remind me of the final kneading of well-risen bread dough before it gets popped into the oven. You can tug and stretch the yarn as much as you’d like, but it always bounces back into form.

The yarn’s two strands occasionally came unplied while I was working with them. The two strands sat side by side on the needle, and a few times—mostly when I was looking away and knitting by touch alone—I snagged only one strand by mistake. The twist and spin are much more consistent than I remember, although they still have a bit of that lively irregularity so common in mulespun yarns.

In 2003, the yarn’s suggested gauge was 4 to 4.5 stitches per inch on US 8-9 (5-5.5mm) needles. Today’s skeins have the same weight and yardage, but the labels do away with the 4 stitches per inch and US 9 ends of the spectrum. I prefer the tighter gauge for structure and durability, but not everybody will. Fortunately the yarn’s extremely airy nature means greater flexibility in needle size, with the fibers expanding and contracting to fill whatever space you give them.

Swatching was a pleasure and I had a hard time putting my yarn down. Stockinette had the earnest, homespun look of a two-ply woolen-spun yarn. Both garter-stitch and seed stitch were extraordinarily springy and three-dimensional, while k2/p2 ribbingwas rendered somewhat wobbly. 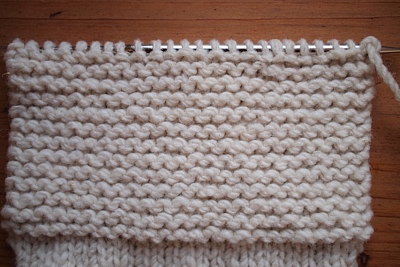 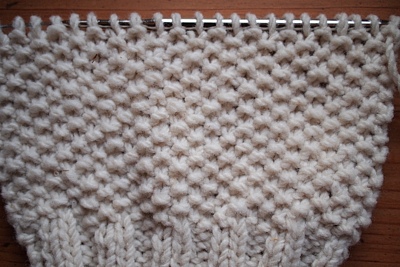 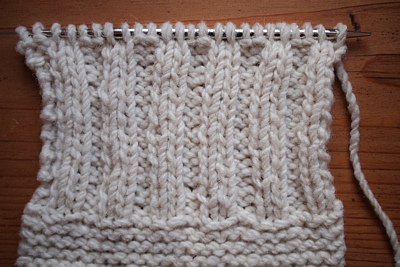 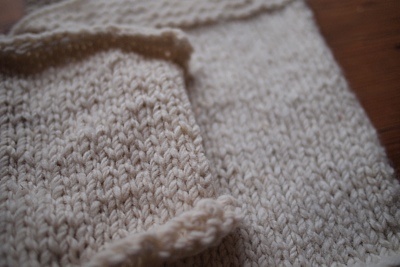 This yarn produces an incredibly lofty yet lightweight fabric. My swatches willingly allowed themselves to be dunked in their warm soapy bath, relaxing immediately.

They released a faint poof of light beige in the water, likely residual lanolin and oil from the spinning process. After the water settled, I could also see very fine bits of what looked like dirt at the bottom of my bowl. While finicky folks may find this off-putting, for me it’s a sign of gentle processing that translates into healthier, more lively fibers.

When I squeezed my swatches in a towel and set them out to dry, they blocked back to perfect shape. Best of all, the fibers had bloomed beautifully (unwashed at left, washed at right), rendering a cohesive piece of fabric with a fuzzy come-hither surface halo.

Columbia fibers aren’t as soft as Merino, but they still fall quite high on the softness scale. Lightweight and spongy in texture, my swatches produced nary an itch against my skin. The more I washed my swatches, the more the fibers bloomed and the softer they became.

The yarn’s already matte and jumbled appearance helped mask signs of wear and tear, even after several minutes of constant taunting. Tiny pills slowly appeared here and there, but they were only visible up close and easy to remove.

As it ages, I can see an Imperial Stock Ranch sweater becoming that favorite cuddly sweater you wear by the fire on rainy weekends. 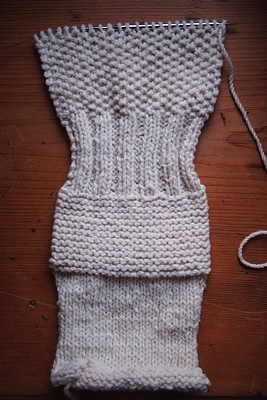 For many years, Imperial Stock Ranch yarns were only available from a few stores. Fortunately, the ranch has decided to pursue the handknitting market in earnest. The broader distribution increases your chances of finding some of this wonderful yarn at your own LYS.

Since I first reviewed this yarn, the cost per skein has increased by about 20 percent. But so has the cost of wool, feed, gas, and pretty much everything else. A fairly simple medium-sized women’s sweater now falls in the $120 range, which I still think is reasonable for fibers of this quality and pedigree.

With so many wool yarns on the market, why should you bother going out of your way to find this one? For starters, it’s a great knit that produces a spongy and succulent, home-grown fabric. But perhaps more important, when you’ve cast off that final stitch you’ll be wearing a tale of Western expansion and the American dream.

You’re wearing the story of how one man, equipped with just a saddle horse, pack horse, and six-gun, became the biggest landowner in the state of Oregon, running tens of thousands of sheep on the very same land as the sheep that produced your yarn today. And your garment will be physical proof that, while increasingly challenging, it’s still possible to produce good domestic wool on a large scale while following ethical and sustainable business practices.