Since reading Carson Demers’ book, I’ve had ergonomics on the brain. Which may explain why, at this year’s New York Sheep & Wool Festival in Rhinebeck, I was most excited by Indian Lake Artisans, makers of hexagonal knitting needles.

The idea is simple: Round needles have nothing “flat” for the hand to grasp. Like a round pen, the needles can roll around in your hand, putting more stress on your fingers to keep a steady grip. 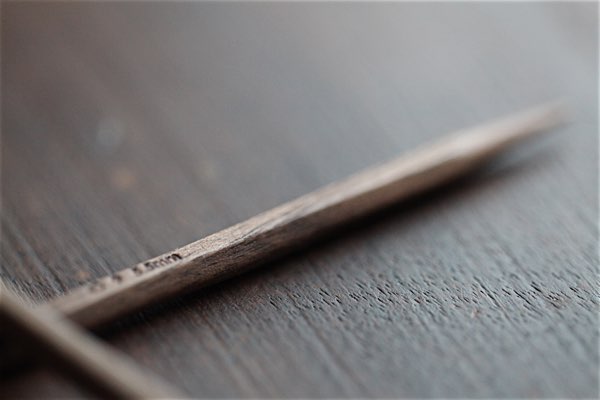 If you introduce flat areas along the needle shaft—like the three-sided rubber thingy they used to put on pencils when we were kids—the needle is easier to hold and your stitches are steadier and easier to manage. As a bonus, that slight recess where the needle is flat instead of round creates room for your needle tip to slide into even the tightest of stitches.

Just to be clear, these aren’t novelty gimmicks, they’re fully functional knitting needles that happen to be hexagonal instead of round. Their shape gives you more to hold onto, which—depending on how you hold your needles and whether or not your hands tend to cramp or ache after too much knitting—may make your knitting much more comfortable.

In terms of “matching” these to patterns and yarns that call for round needles, there’s nothing to it. The circumference is ultimately very similar; and, since the goal is usually to achieve a desired gauge no matter what the means, the shape of your needle ends up being irrelevant. As long as we swatch (ahem), there should be no problems at all.

The Story of Squares

This isn’t the first instance of a nontraditional-shaped needle. Way back in the stone ages of 2006, the yarn company Kollage introduced square knitting needles. First came wooden single-pointed straights, and then two years later came the aluminum circulars. While they didn’t replace every needle in the world, they definitely gained a following among knitters with hand problems. When Kollage closed, Louet picked up the line. Knitter’s Pride followed suit with its Cubics, and, in January 2017, Knit Picks released its own Foursquare design.

It was a pair of those early square needles that started Indian Lake Artisans‘ Pam Hoffman on a journey. An LYS owner tried to demonstrate how easy the needles were to use, but couldn’t really get the hang of them. Pam left, wondering, if a square needle didn’t quite make sense, what shape would? 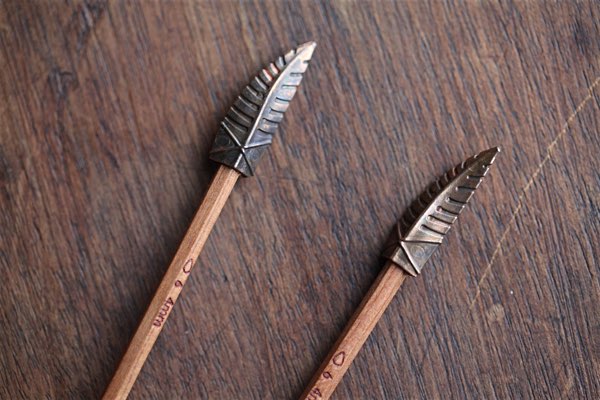 At first, she thought of a stop sign. “Here’s a shape that has flat sides in a circle,” she told me, “but maybe the ratio of flat to round was too short to make any significant difference for ease of gripping.” Then her eyes fell on the Dixon Ticonderoga pencil rolling around on her dashboard tray, and her brain clicked. If this had been a movie, she’d stand up and yell, “Eureka!” The date was December 23, 2006.

Pam designed a needle and enlisted the help of her husband Mark Bartholoma to create the prototype. In 2009, she was awarded her first patent, and in 2010, the first Indian Lake Artisans hexagonal needles hit the market.

They began with three-sizes of 14-inch single-points in three different woods. Today, they offer more than 300 variations of needles, from single-pointed straights and DPNs to circulars and interchangeable circulars. You’ll find their needles on the Indian Lake Artisans website as well as through select retailers. 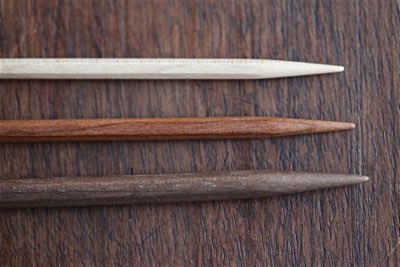 The needles come in three different types of wood, each sourced in Michigan and chosen for the strength, density, and surface friction it brings to knitting. Maple is the hardest, smoothest needle. Cherry is a medium-range blend of strength and slight surface friction. Walnut has the softest feel and provides the greatest degree of “grab” to your stitches.

Pam is seriously committed to making this business as local as possible. The wood comes from a mill in Highland, their cutting tools from Flint, and the circular connector components from St. Clair. The whimsical-shaped “toppers” for single-pointed straights and interchangeable cords are made in Granville and copper-plated in Warren. The packages are made in Rochester and die cut in Dexter. Even their beeswax has been locally sourced from Benzonia.

The needles themselves are made by Pam and her husband Mark. He does the initial cutting, assembling, and sanding. Pam does the finish sanding and testing. That’s it. They have no crew of minions, no overseas factory, it’s just the two of them doing all the work. 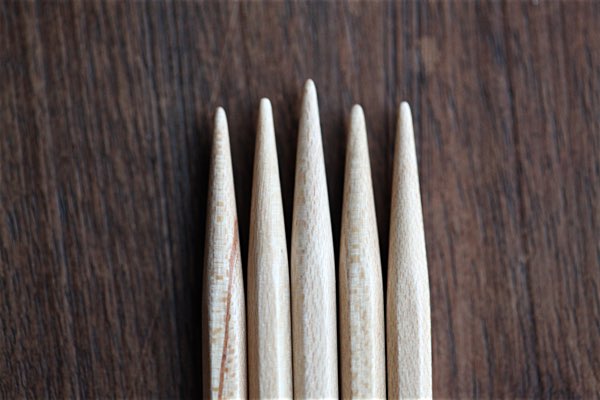 That intensely handmade element comes through in charming little ways that are augmented by the innately variable nature of wood itself. My DPNs, for example, weren’t completely uniform in length.

This small local production, rather than sourcing lower-cost imports at a higher volume, comes at a price. Needles are listed between $30 and $35 per pair.

If you happen to have come into a big inheritance, the interchangeable circular needle sets would be unforgettable. For the rest of us, even a single pair (or two) in your favorite size would be a lovely gift to yourself.

One benefit of everything being made so close to home? You can place custom orders at no extra charge. They offer custom lengths of circular and interchangeable circular cords, from 22 to 100 inches, as well as a variable 4 or 5 inch shaft lengths. DPNs come in shaft lengths of 6 to 8 inches depending on size, but you can also custom order any of them in lengths from 5 to 8 inches.

Reasons to Buy Beyond the Shape?

The key selling point of these needles is that the hexagonal shape puts less stress on your hands, allowing you to knit for longer periods of time. Which is important. But I also found them charming for a few other reasons.

That slightly reduced length gives them a greater feeling of agility in your hands. But if you like longer needles, they do let you custom order circs and interchangeables with longer shafts. 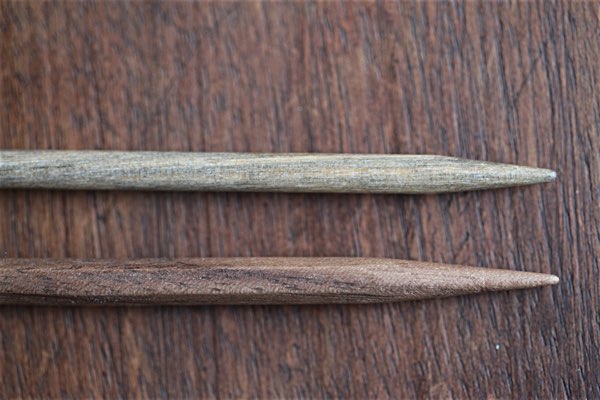 Second, the taper. It feels different than what I’ve been using in other needles, not stubby but not too lengthy either. It’s rather like what I’d really want to see in…well, here we go again…a pencil. The taper feels just right, and the tip is precise without being snaggy.

Tight knitters, these needles will be your new best friend. With the hexagonal shape, each stitch sits on the outer points of the hexagon, slightly away from the needle.

That faint gap between each of the six edges isn’t significant enough to change your stitch appearance in any way, but it does make it much easier to insert your needle tip into your stitch. The gap holds open space so that even unyielding silk can be manipulated comfortably. 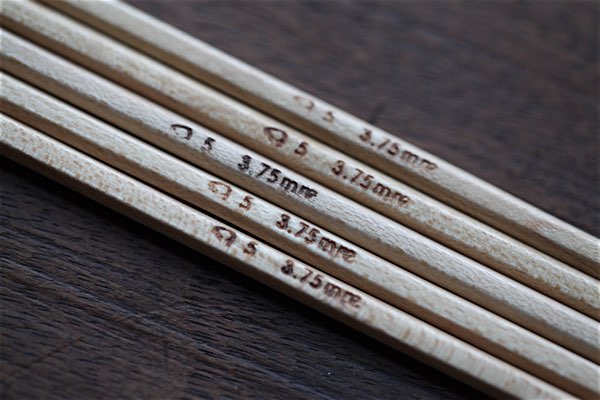 The size is burnished on the needle, so that it’ll never rub off or snag on your stitches. Size is noted in US and metric. Cords are clear, on the fine side, and pleasantly pliant yet supportive.

The connector on the interchangeables is stainless steel with a screw mechanism made from a high-precision Michigan manufacturer Pam just happened to meet at a family event.

The circular needles have a swivel cord that further eases stress on the hands. That same swivel connection in the interchangeables means a far lower likelihood of twist pressure causing the cable to come unscrewed. Consequently, there’s no need for a key.

The join is smooth and easy, with no real snag or jump. So far I haven’t had a cord come loose. 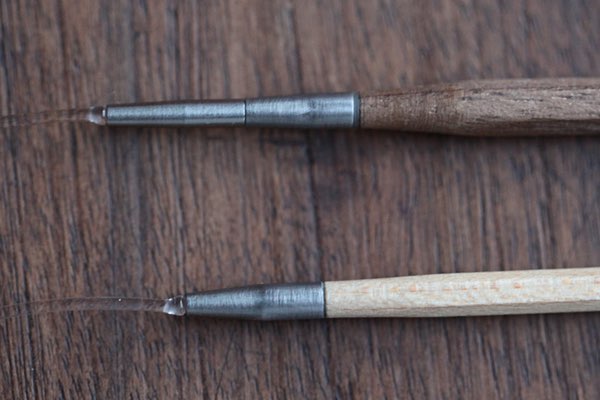 Join details in the interchangeables (top) and fixed circulars (bottom).

The needles are finished with beeswax. As you use the needle, your hands rub the oil into the wood (and any residual oils on your hands as well), developing a smoother patina over time. The walnut was especially slow at first, but after a few swatches its surface felt just right.

As with any similarly porous material, be careful to avoid using any yarns that may “crock” excess dye onto your hands and needles.

The finials on the single-pointed straights look substantial but add almost zero weight. They’re also offered with a screw tip (called “topper stoppers”) that fits onto interchangeable cords to make them into stitch holders, or to make super long needles. This could be helpful for blankets, where you need a significantly longer bit of needle real estate to hold all those stitches. (My Two Ladies adjustable straight knitting needle system was designed expressly for this purpose.)

What’s the verdict? Should you make a bonfire out of all your old wooden needles and vow only to be hexagonal from now on?

Ultimately it comes down to personal aesthetics, ergonomics, and budget. I would recommend you hit one of the shows where Indian Lakes Artisans is vending and spend a good amount of time trying these for yourself. Let your hands tell you what they think.

For me, the combination of the hexagonal shape and the taper of the tip gave these needles a pencil-like feel that was comfortable and familiar. With all those edges, everything stays in place in your hand. There isn’t nearly the same need to clutch and control, because the needle is doing it for you.

For anyone who loves writing by hand, or who has fond, easy memories of writing with a plain old No. 2 pencil, these needles will instantly feel at home in your hands.

You may find that they revolutionize how knitting feels to you. Or you may say, “Hmm, that’s interesting,” and return to your usual tools. Or you may fall somewhere in between and add a pair or two to your needle collection for a little variety. And as Carson mentioned in his book, variety in our projects and tools is key to a healthy, happy, and long knitting life.