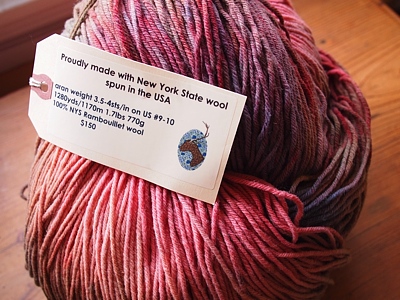 A few years ago, Jill Draper escaped New York City to pursue a quieter, more fiber-filled life. She chose the Hudson Valley partly because of its proximity to Rhinebeck, a charming town she’d discovered through years of attending the New York Sheep and Wool Festival.

Jill is a knitwear designer and hand-dyer who, true to the name of her company, makes stuff—primarily yarn, which she dyes by hand. Some of her yarn bases are more common and from third-party suppliers, but increasingly she is focusing on sourcing her materials directly from the farm and keeping the full circle of yarn production as local as possible.

Empire is one of her newest creations. It is made from 100% Rambouillet fibers sourced from a small nearby farm in Albany County. The fiber is shipped to a New England mill where it is processed gently and without chemicals, before finally being returned to her for dyeing.

The first thing you’ll notice about Empire is its size: Empire comes in a huge, huge skein. Which is why each skein retails for $150. You’re getting 1,280 yards (1170m) of yarn, which weighs in at 1.7 pounds and will provide enough material for an entire sweater—provided that sweater is of a certain size. Jill also offers “Mini-Empire” skeins with 213 yards apiece if you want to add a contrasting color to your garment, or if you’d like to knit a larger sweater.

Barring that, you can always divvy up the skein and make, say, ten sets of matching fingerless mitts for all your friends. 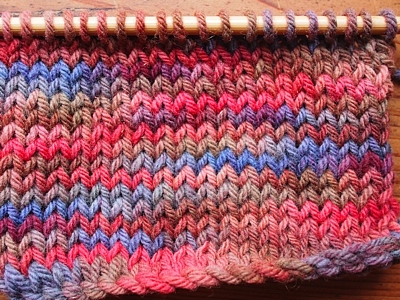 The first thing you’ll notice about this skein—after remarking on its substantial girth—is its squeezability. Rambouillet is a finewool with extraordinarily high crimp and elasticity, and those qualities have not been hindered during spinning.

The yarn is composed of four plies that have been twisted together at a medium angle. On the hank and on your needles, it feels extremely round and somewhat firm. Tug on a strand and it will stretch quite comfortably, which makes maintaining tension a breeze.

Empire is such a big skein that you’ll have to wind your yarn by hand, or make several skeins on the skein winder—but being sure never to snip the end from one skein to the next so that you maintain color continuity. I found one knot in my skein. But considering that skein had the same amount of yarn as six to eight “normal” yarns, and how many knots they can have, I didn’t have a problem with this.

Normally I would’ve tried cables in such a rounded yarn, but the colors would have overridden any significant stitch patterning beyond knits and purls. I’ll admit I was a little afraid that the complexity of my skein’s colorway would overwhelm my fabric, but just the opposite. It was a pleasure watching the colors move and shift and react with one-another as they came together in the fabric. I’m eager to knit a larger piece and see the colors on a big scale.

Knitting was swift and easy, my stitches open and even. Gradually I noticed a twist building up in the yarn, so I dropped my swatch periodically to let it release. The yarn is perfectly balanced, but the fibers themselves have so much crimp that I could feel their pent-up energy. I was curious to see what would happen in the wash.

I expected a little “poof” of color in the wash, which normally happens for me with hand-dyed yarns and especially those so heavy on the reds and pink. I was surprised (pleasantly) to see none.

My swatch washed and rinsed fine. I gave it a little more time in the wash because I wanted the warm water to penetrate all the nooks and crannies and relax the fabric a little. 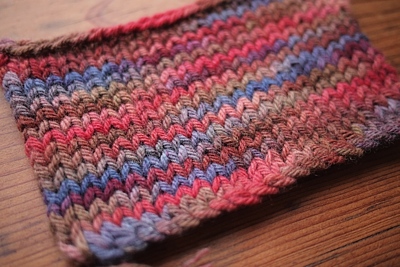 When the swatch finally dried (which took a while) I noticed no change in stitch or row gauge or color saturation. Some of the tension had relaxed, easing the stitches into smoother, plumper formation and showing the beginnings of cohesive fabric.

Rambouillet is a finewool. In oversimplified terms, it’s like a Spanish Merino that went to live in France, got stuck there with the revolution, and became a breed all its own. The fiber has a fine diameter and produces almost no prickle or “itch” against the skin. To the touch, it has a slightly dry feel almost like cotton—which this yarn does too.

Finewools are innately more prone to wearability issues simply because the fiber diameter is so small, like fine china is more fragile than everyday stoneware. The yarn’s four well-twisted plies add welcome strength.

Friction softened the fabric, and over time a very faint halo began to appear over its surface. With quite a bit more friction, that halo developed tiny, barely visible neps that were well-anchored in the fabric. From 12 inches away or further, I could only see a soft-looking fabric.

I confess I’m a little bummed that Jill Draper won’t have a booth at the 2012 New York Sheep and Wool Festival. I would’ve loved to watch people carry these baby-sized skeins around the fairgrounds. They are enormous, and they invite holding, squeezing, patting. I confess I even pretended to burp mine.

If we were to judge yarns by skein appeal alone, this would get a top score. But the yarn itself—the blank canvas of spun fibers—is good at no matter what sized skein, no matter what colors are applied to it.