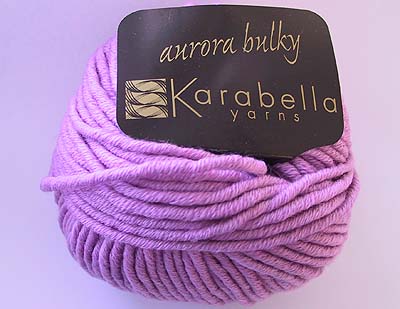 One of my very favorite Merino yarns, Aurora 8, has a large and loyal following. It has the sponginess of a well-yeasted bread dough, paired with the exquisite softness of merino. It knits up quickly and easily. 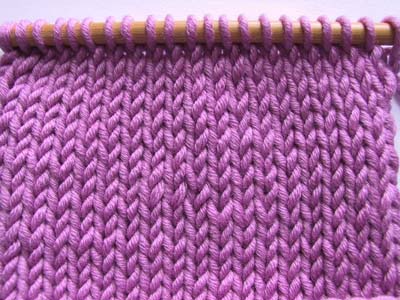 I decided to see just how bulky this yarn could go, so I knit my swatches on US 11 (8mm) needles. Knitting was fast and easy, but I did encounter some ply-snagging. Let me explain.

To achieve the additional bulk in this yarn, Karabella had to increase the number of plies from 8 (in the aptly named Aurora 8) to 14, each of which is composed of two smaller plies. That means each stitch requires 28 strands to behave properly.

They did behave well except for the first and last stitch on each row, which tended to come unspun. At one point, after several rows of knitting by touch alone, I looked down and discovered a large loop of stray plies halfway down the edge of my swatch. Oops.

I wouldn’t let this stop you from knitting by touch alone, but you may want to be careful on those bookend stitches.

My yarn also tended to kink up between the ball and my knitting, so I paused every few rows to dangle my work and unravel the kink. There’s a precise science to balancing the spin from one ply to the next, and this yarn has a lot of plies—so the kinking didn’t surprise me, and I couldn’t see any negative results in the finished fabric.

Like its finer cousin, Aurora Bulky has fantastic stitch definition. But because of its bulk, I’d use stitchwork sparingly just for effect. A sea of bulky cables could be unflattering

The minute my swatches hit the water, I could feel them relaxing. They did not bleed, fade, or show any signs of wash-related fatigue—but they sure got big. I blotted them with a towel and let them dry flat.

Although they did pull back into shape a bit, they were still significantly larger than the unwashed swatches. In fact, my unwashed gauge of 3.5 stitches per inch expanded to almost 3 stitches per inch after wash, or an expansion of almost 14 percent. To put it in perspective, a sweater that measures 20 inches across the front will measure almost 23 inches after being washed.

Interestingly enough, as I began putting the swatches through their wearability testing, they pulled back more into shape—which is why I said the finished gauge was “almost” 3 stitches per inch. So after you wash your swatches, be sure to pull, tug, and rub them a bit before determining your ultimate gauge.

Although the surface definition was still crisp after washing, the overall fabric was far more unified and coherent. Already soft, the swatches felt even softer after their bath.

Merino has a reputation for being more delicate and light-wearing than other wools. To a point, this is true. But it also depends on how the yarn has been spun.

In this case, Karabella has brought together so many individual plies, at so many stages, that the resulting yarn is as tough as steel. Yet its underlying fiber makes the yarn springy and luxuriously soft to the touch.

After a reasonable amount of abuse, my swatches began to develop an occasional surface pill, which is to be expected. Over more time, the surface gradually started to blur. Pills were easy to remove, and the aged swatches were still beautiful. As an added benefit, they also felt softer and more relaxed with wear.

If you want a sweater you can wear with nothing underneath, I’d recommend using the smaller needle. I could definitely see through my swatches knit on US 11 needles, while those on US 10.5 needles were far more dense and firm—but at the expense of relaxed fluidity.

I guess you can take something perfect and make it even better. Karabella managed to capture all that’s good in the already popular Aurora 8 and expand it to a bulkier gauge.

My only peeve—and a minor one at that—is that each skein has only 56 yards. You’ll barely have time to gather momentum before you’re out of yarn.

From a price-per-yard perspective, you’ll pay more for Aurora Bulky than for its slimmer cousin—but that’s because each yard contains far more fiber.

A medium-sized women’s pullover will require approximately 14 skeins and run you $140. You’ll get a luxuriously soft yet durable garment that will last several seasons. Likewise, this yarn is totally appropriate for baby clothes, children’s sweaters, afghans, blankets, or anything else that deserves softness and beauty.