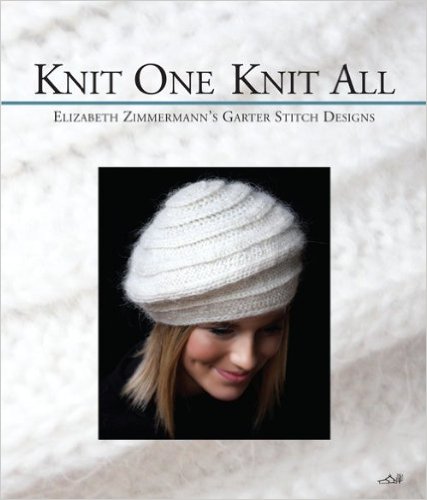 On November 30, 1999, Elizabeth Zimmermann passed away at the age of 89. In her newsletters, books, and DVDs, she left behind a legacy that has launched and sustained generations of knitters.

As we’re beginning to discover, Elizabeth also left behind another legacy: decades of sketches and journals detailing many more knitterly ideas.

Some had become swatches and even garments over the years, while others remained unrealized dreams.

Among those notes, garter-stitch played a strong recurring role. Elizabeth loved this simple pattern, “the bread and cheese of knitting” as she called it. She was fascinated with the texture it produced in knitted fabric, the “beautiful crinkly ridges.”

Early on, she suggested a book on garter-stitch to her editor. They agreed to put it on the back burner while she finished Knitter’s Almanac. But subsequent attempts to discuss the topic with editors always hit dead-ends. Nobody believed that a book about one single stitch had enough of a future—this was long before Sally Melville’s books on the knit stitch and the purl stitch, or Nancy Marchant’s fantastic opus on brioche (the stitch, not the pastry).

Alas, the garter-stitch book idea never moved from that back burner, although Elizabeth continued to jot down her ideas. By the time she passed away, she’d built a successful publishing house and mail-order business, Schoolhouse Press, and had transitioned it into the capable hands of her daughter Meg Swansen.

No longer was it a matter of convincing another publisher of her garter-stitch dream—her family had the means with which to bring that dream to fruition. Meg’s son Cully inherited the family fiber gene and took on the task. Sifting through his grandmother’s boxes and bags of notes, in consultation with Meg, I’m sure, he managed to unearth the hidden gems, decipher his grandmother’s often cryptic squiggles, swatch, calculate, swatch again, and eventually curate a book that has just been published in Elizabeth’s name, Knit One Knit All.

The book presents 38 original patterns and variants thereof. The projects run the knitterly gamut—hats, caps, and tams; mittens and gloves; booties, clogs, and slippers; baby booties and jackets and a blanket sampler; and vests, sweaters, and jackets.

I should note that this isn’t a how-to book about garter stitch. You’ll find no introductory chapter about how garter stitch “works,” no illustrated tutorials or practice lessons to get you started. (Not that the chapter would be very long, considering the nature of garter stitch.)

Rather, this is a collection of patterns that, if they were music, might be called variations on a theme of garter. Some of the results are expected, some not so much—like the sideways socks.

While it’s sometimes difficult to tell where one generation leaves off and the next begins in Schoolhouse Press publications, this book still feels stylistically and energetically like Elizabeth. The projects, conceived 30 to 40 years ago, are like clever little time capsules harking back to that magical period of time when Elizabeth was deep in her so-called “Garter Stitch Phase” and the ideas were flying. You may not see any of these garments on a Paris runway anytime soon, but I doubt that was the point. Technique is.

Some of the patterns in this book are clear cousins of designs that did make it into published works. They offer welcome insight into the evolution of her thought processes.

Many are also delightful reminders of her love of wordplay, a love that has clearly been passed down to subsequent generations. For example, her famous Baby Surprise Jacket has a cousin in this book, and it’s called the Baby Surplice Jacket.

In re-creating the written patterns, Cully demonstrated judicious restraint in applying hand-holding only when necessary. The patterns balance respect for the independent knitter as well as compassion for the nervous one. Or, as Elizabeth herself noted in the introduction to her Add-a-Booties pattern, “directions are for both Blind and Beady-eyed Followers.”

As was the case with Elizabeth’s previous books, the language is a joy to read. The pattern introductions are generally kept brief, usually only expanding when Elizabeth had provided the notes herself. Such an approach helps keep her original voice undiluted throughout. You’re left longing for more.

One pattern is accompanied by a facsimile of her journal page where she’d sketched the hat and noted it “was a dud until Meg put it on.” Bavarian or Austrian children’s jackets are, in her words, “liberally bespattered with stag-horn buttons.” And then there’s the I-Cord Sampler/Potholder/Baby Blanket, with Elizabeth’s note, “A Pot Holder? A Baby Blanket? The difference is only in size.”

The yarns used in the projects—happy wools sold through Schoolhouse Press—are all ones that Elizabeth would’ve had in her own stash. Even the colors evoke moods and contrasts you will have seen in her previous books.

From Circular to Garter?

An irony is that Elizabeth Zimmermann was perhaps best known as a champion of circular knitting. Yet many of her most famous projects—such as the Tomten and Baby Surprise jackets—were knit flat using garter stitch.

How could she be such a vocal supporter of knitting in the round and yet create so many works that had to be knit back and forth? The answer is simple: Both circular knitting and garter stitch helped her avoid the purl stitch, for which she had long professed a passionate dislike.

Some critics argue that unfinished works should be left as is, that any attempts to complete someone else’s work result in a piece that is, itself, no longer original. I tend to agree.

However, Schoolhouse Press has long been a family affair. Meg worked so closely with Elizabeth on her videos, books, and knitting camps over the years that they were almost of the same mind.

That same connection seems evident in the respect and restraint Cully showed in further bringing this lovely book of his grandmother’s unfinished work to fruition. I’d like to imagine her sitting on a fleecy cloud right now smiling down and nodding in approval.