When I first heard that Knit Picks was producing its own needles, I thought, “Uh-oh, this is the end of the needle market as we know it.” I knew Knit Picks would bring a good product to market and sell it at wholesale prices directly to the consumer—it was the impact on the rest of the needle market, and the stores that sell them, that worried me.

But there’s no getting around it. These are nice needles, and they will serve a lot of knitters well. Even the early prototypes they showed me at the beginning of this year were impressive. And the final shipping product is equally top rate. [Note: This review was first published June 29, 2006.]

The Notion of Options

The Options needle set is based on a pretty intelligent observation: Most knitters tend to use a few needle sizes more often than others. Typical interchangeable needle sets ship with a single pair of each size, so once you’ve embedded them in one project, your set is immediately less useful.

So Knit Picks has broken the set apart into, as the name suggests, options. And you can buy them separately based on your own needs. If you knit exclusively with size 5 and 6 needles, you can get 20 pairs of 5 and 6 needles and as many cords, of as many lengths, as you want.

If you still want the full set, they’ve created a special package with nine of the most common needle sizes and two 24″ and 32″ cables (with eight end caps and two cable keys) in a snapped clear vinyl case and are offering it at $44.99. But the key here is that you don’t have to buy the whole set. You really can buy as many (or few) tips and cords as you want.

Depending on whom you think the competition is, these needles are either really cheap (in some cases more than half the price of Addi Turbos) or the same (comparable in price to Inox Express).

The Elements of Options

There are two basic components to Options: the needles and the cords. The needles are all 4 1/2 inches long and range in size from US 4 to US 17. They’re manufactured in India of a nickel-plated hollow brass (the same material from which Addi Turbos are made).

Smooth and lightweight, these needles rapidly warm up and feel comfortable in your hands. The surface is sleek and smooth, although I noticed a bit of blurry buff marks at the place where the needle body begins to taper to the tip. In action, they make the telltale clickety-clack sound of metal needles.

There is no size marking on any of the needles, something about which I have mixed feelings. I immediately envisioned my orderly kit descending into mayhem, all the tips rolling around like spent bullet casings in a Ziplock bag. (Not that I have much familiarity with spent bullet casings, but these needles do have a serious look to them.)

Knit Picks says that you can use a needlesizer to keep track (and yes, they conveniently offer one), but that still requires you to sort through all the tips to find a matching pair. If you use the cable to hold projects, you can either tag them with Knit Picks’ handy plastic medallions with needle sizes on them, or you can also tag them with a product like the Circular Needle ID Tag.

But I think you’ll definitely want to think about an orderly storage method right up front. You could also use a soft tackle binder bag, or those old-fashioned back-to-school plastic pencil pouches that slip into three-ring binders. But you will need to commit to something. 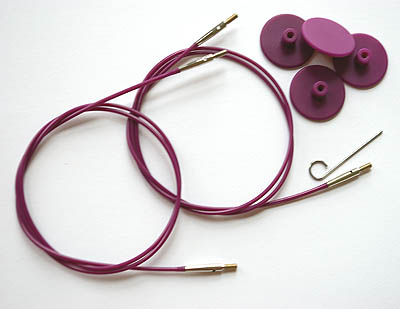 The cords screw into the base of the needles rather like the Boye Needlemaster and Knitter’s Pride Dreamz. Unlike the Boye set, however, the connection on Options is straight, not curved (and the screw-cap is just a shade too large to fit in the Boye needles).

However, these should be interchangeable with the Knitter’s Pride needles.

Cords ship in sets of two with four end caps (which screw onto the ends of the cables, so you can use them as giant stitch holders or single-pointed straight needles) and a cable-tightening key. 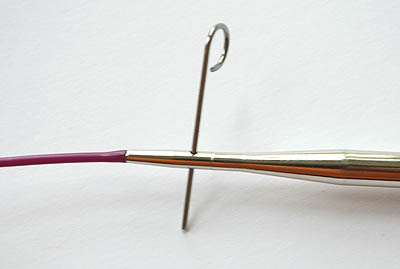 The key slips through a tiny hole in the base of the needle and gives you extra leverage as you screw the needle into the cord. I found the key was pretty essential. At first I just screwed the pieces together and started knitting, but they kept coming unscrewed. I used the tightening key and the unscrewing stopped. (And if you lose your key, just use the end of a slender paperclip instead.)

If you’re a lace knitter, you can also use that hole to carry a lifeline through your work. You just slide the new yarn through the hole and knit your row as usual, with the lifeline naturally trailing through the whole row. (But note that this technique also secures other things like closed stitch markers.)

The join itself is smooth and snag-free.

Besides the low price and the buffet menu option, the real story with Options is the cables and the tips. Knit Picks spent quite a bit of time developing a far thinner and more flexible cable than the closest competition, the Addi Turbo needle. Here you can see a close-up of the Knit Picks cable (top) and the Addi Turbo cable. I can see a few cases where a thicker cable may come in handy—perhaps on bulkier projects that need more support. But otherwise, the thin cable on the Options needles feels very fluid and unobtrusive. 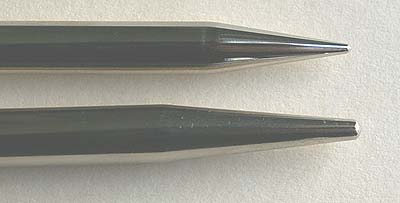 More noticeable than the cable, however, are the tips. These suckers are sharp. Here’s a close-up of the Knit Picks tip (top) and the Addi Turbo tip (bottom) to show you what I mean. These sharp tips invite lacework and any chance to navigate elaborate decreases where tip precision really counts. If you tend to knit bulky, loosely spun single-ply yarns, however, these sharp tips may snag. You’ll just have to test them out and see, since people’s knitting styles vary so dramatically.

Also, if your knitting technique involves any contact with the tip of the needle (I know some people like to push the tip down with their index finger), you’ll definitely go through a break-in period of soreness and blisters. The resulting callous may be well worth it, though.

I only have a few critical comments about these needles, and they are for the most part superficial. The first has to do with their packaging. The needles arrive in plastic sleeves similar to the ones used for greeting cards. They are secured to a thin piece of paperboard with a narrow strand of elastic. Getting the needles out of the pouch is easy enough, but sliding them back in proves to be a bit more problematic.

Second, one of the larger needles in my set had a dent. I’ve never seen this before, and it seemed to be a production fluke—but the Knit Picks folks took the feedback very seriously. I trust that if you received a dented needle they’d replace it, no questions asked.

And third, the shortest cable is 24″. Other interchangeable kits give you at least one shorter option (the Denise kit gives 5″, 9″, 12″, 14″, 16″, and 19″ options). Also, unlike the Denise kit, you can’t connect cables to make a longer main cable. The longest cable is 60″—but this should be fine for most uses except large afghans.

In conjunction with this release, Knit Picks also unveiled nickel-plated brass double-pointed needles and fixed-cable circulars in sizes 0 to 3, which were too narrow to accommodate the screw-cap mechanism in the Options cable.

The DPNs are a dream come true for people who love knitting socks on teensy needles. They’re strong and lightweight and exceptionally pointed. So pointed, in fact, that I brought them on a recent plane ride to see if security would complain. (They didn’t.)

The circulars are similarly helpful for fine-gauge knitters except that the cable lengths only span from 16″ to 24″ to 32″. To knit using the magic loop technique, you really need a longer cord than that—most people work within the 36″ to 47″ cable realm. I know requests have been made to Knit Picks, and I suspect a longer cord is already in the works. [Update: Indeed! You can now get the cords in 40″, 47″, and 60″ lengths. Magic-loop away!]

I know the introduction of these needles will respark the larger debate about Knit Picks’ practice of bypassing the LYS and selling directly to the consumer. Critics insist this hurts the knitting market as a whole by taking business away from the LYS. Supporters celebrate how Knit Picks makes quality materials affordable to a broader base of knitters.

I won’t venture to speculate where the truth lies, or if there even is a single truth to the situation. But I do know this is an ongoing concern for many, and that the introduction of these needles will bring yet more debate to the surface.

But there’s no avoiding one fact: These needles are a great product.