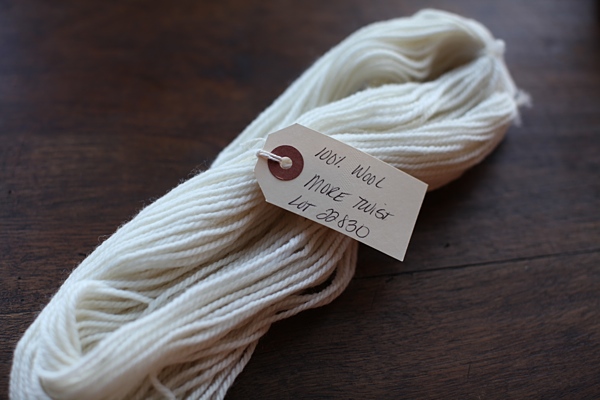 To evolve from handspinner to yarn manufacturer is like switching from an upright piano to a pipe organ. Everything is bigger, more powerful and exhilarating. The potential for mistakes is huge, but so is the depth of satisfaction when you get it right.

After two years of experimenting with making yarn, with three bales and thousands of pounds of wool under my belt, I’m just now starting to feel like I understand the process. Cormo 2.0 is my latest Clara Yarn creation. I want to share with you my growing appreciation for what it takes to make a good skein of yarn in this country.

It began with a bale of American Cormo wool, which came from Montana sheep on a family farm Elsa Hallowell has worked with for years. Elsa is the spirit behind Elsa Wool, which launched my passion for breed-specific wools many years ago.

American Cormo is our domestic offspring of capital-c Cormo, a breed developed in Tasmania by the Downie family. It’s a cross between Corriedale (think hearty sheep with long curly fleeces) and Merino (think cashmere in sheep form), with an extraordinarily soft, moist hand and a crimp that is among the most difficult-to-tame of any finewool.

Last year, Elsa let me buy two bales of Cormo from her supply. The first bale was spun into thick, spongy four-ply worsted-weight yarn that I released earlier this year as Cormo 1.0. But I held off on opening that second bale until I really felt ready to do it justice. 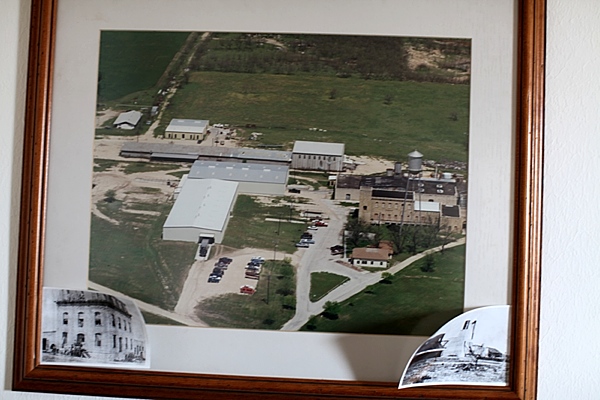 The wool scouring infrastructure in the United States is precarious at best. Just two commercial-scale scouring plants remain, and only one of them actively offers its scouring services to smaller producers.

The rest of the scouring is picked up by smaller mills across the country, at a price of just over three times what the larger plants charge. But if you want to scour anything under 1,000 pounds, smaller mills are your only option.

We were lucky. This Cormo had already been scoured and baled at Bollman’s in Texas as part of Elsa’s entire order. Lesson one in domestic yarn manufacturing: Teaming up for bulk discounts is a good thing. 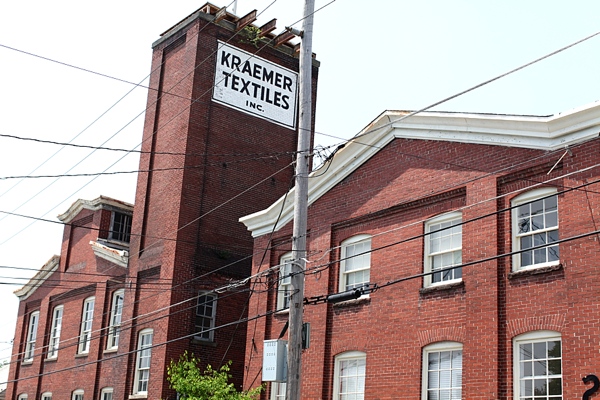 From Texas, our bale was shipped to Nazareth, Pennsylvania, where the Schmidt family has been spinning yarn at Kraemer Textiles since World War II. The 1980s were brutal for Kraemer, as they were for every mill in America. Kraemer responded quickly, slashing staff and selling-off equipment to stay afloat. Today, their operations are much more nimble and efficient, and they have generations of a deep, intuitive understanding of twist and ply.

Larger mills seek out bigger jobs they can run for days or weeks, the kinds of jobs that use 10,000 pounds of fiber or more. Most handknitting yarns are squeezed in between these bigger jobs, making us the stepchidren on most production schedules. Which is to say, when the mill says they have an opening, you jump.

In August, I asked David Schmidt to put me on his dance card for a combed yarn that would be lighter than Cormo 1.0 both in weight and twist. I wanted greater softness in three plies twisted together, so that the final yarn ran 1400 yards per pound.

To my surprise, just 10 days later he sent me a sample. They had a brief opening in their schedule; I needed to decide quickly. 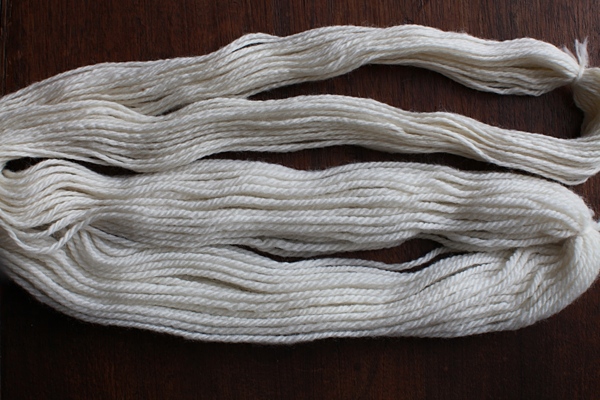 The yarn looked flat and listless, nothing like I knew Cormo to be. But here’s another secret: Until you wash it, yarn from the mill is going to look really depressing. (Top is unwashed from the mill, bottom is after I washed it.)

Another thing about prototypes. Having visited the mill, I knew that David had spun this on his sampler equipment in the lab upstairs. We’d get a close prototype, but the finished yarn would still be a little different. It’s the same as if you bake one tray of brownies in a toaster oven and then scale the recipe to fill 12 trays in a commercial convection oven. You’ll get variaton.

Because Cormo is a finewool and I knew these fibers to be relatively short, I was worried about how well this softer twist would resist abrasion. My swatches pilled far too quickly. While pilling is inevitable with any softly spun finewool, you can take steps to mitigate it. 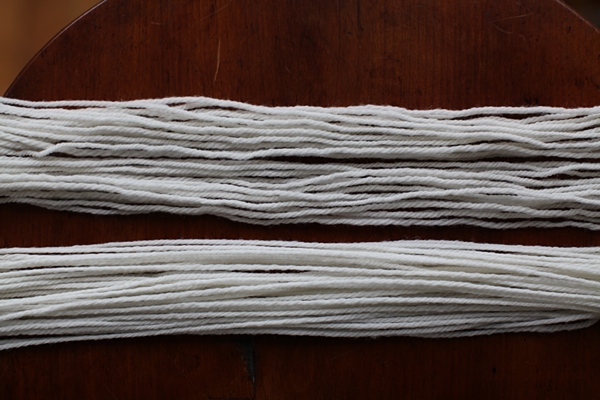 Which is why, as much as I loved that first sample (left top), and as eager as I was to capture that window on their schedule, I knew we needed another sample. I asked David to increase the twist on each ply. Just two days later I had a new prototype (left bottom), and this time, it was perfect. They began production, and by September 10th, the yarn had been spun, plied, and delivered to Maine’s Saco River Dyehouse on cones.

Getting your yarn spun is just the beginning. Next, we needed to get that oiled, flat, lifeless yarn off its cones and onto skeins. They needed to be washed to remove the spinning oils, and then twisted into the pastrylike shapes you normally see for sale.

The Saco River Dyehouse is a relatively new venture born from the ashes of the JCA/Reynolds dyehouse that operated for decades in Massachusetts. The equipment was purchased and moved to the old Pepperell Mill campus in Biddeford, Maine.

The first task was to get the yarn off the cones and into hanks. I asked them to wind off the yarn into 100g hanks because I like being able to get a lot of fabric out of a skein before I have to connect another one. 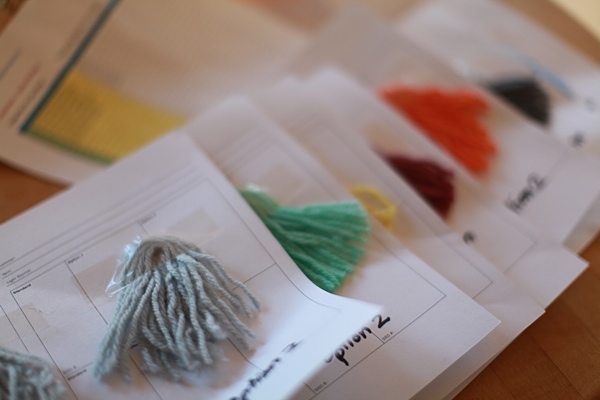 One bale gives enough yarn that you can dedicate some to experiments—and here, I enlisted the dye services of the Saco River Dyehouse.

I picked a pretty palette of colors based on the spring Pantone 2015 range, and I emailed them the PMS numbers. They cut off handfulls of yarn and dip-dyed them in the lab to give me samples—that’s when I learned a new, powerful lesson about yarn. Never specify colors by Pantone numbers alone. Always, always provide physical samples of the colors you want. The transition from flat, printed color to color on fiber is just too great. My colors looked like an Easter basket. I kept only two colors and we began the rest again. 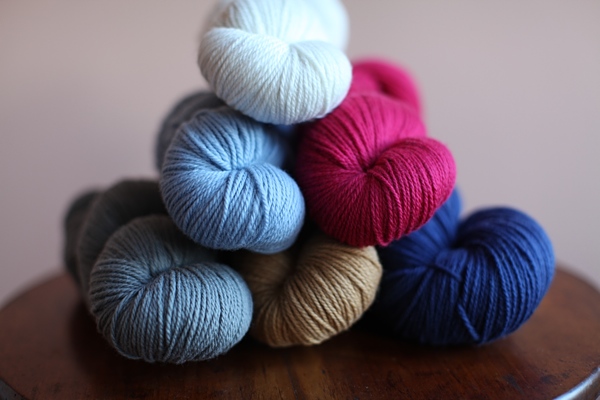 This time, I found physical examples of the very colors I wanted. Nearly all the colors had varying saturation (I wouldn’t call it variegation, more of a flickering semisolid), and the dyehouse worked to replicate these colors—flickering semisolid effects included. 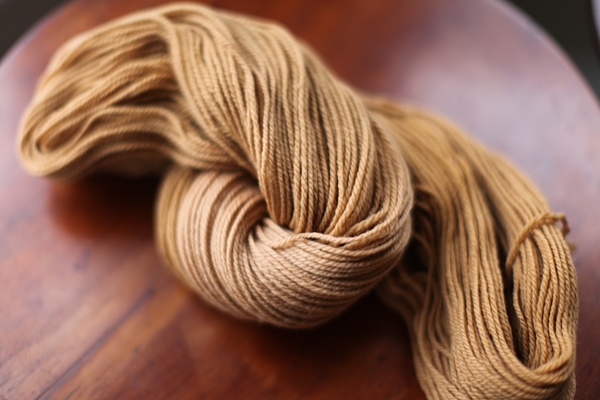 Most of the colors actually ended up fairly solid in nature. Gold had perhaps the most variegation to it. I made a mental note to advise people to alternate knitting from two skeins if they’re making anything substantial. It was an interesting challenge for the dyehouse to “fake” irregularity in a process designed to be flawlessly even.

Meanwhile, to give you a sense of how much time this process can take, those ill-fated Pantone numbers went to the dyehouse on September 17th, and the final dyed skeins (as well as the scoured white ones) were twisted and delivered to my shelves by November 1st. 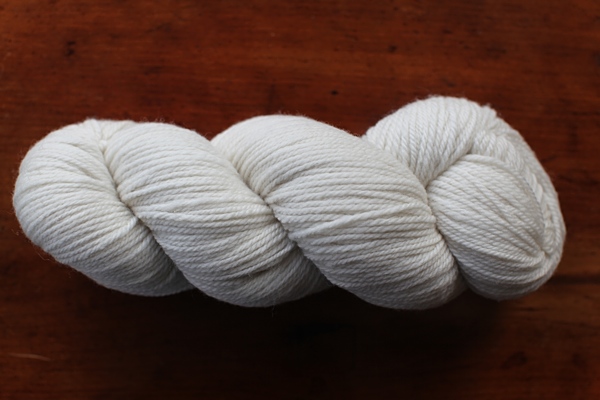 But I still needed another month. Why the delay?

First, those skeins couldn’t be sold until they had labels. Those labels needed to indicate skein weight, yardage, and recommended gauge and needle size—all of which I had to figure out. Here, I stumbled.

When I sampled 10 skeins, none weighed the same. I counted the strands in each one, I measured the circumference, and they were consistent. Yet each skein weighed a slightly different amount. How could this be?

As easy as it would be to blame a fledgling dyehouse for the irregularity, I realized that the answer could be in the wool itself. Remember how I said Cormo has a crazy, difficult-to-tame crimp? In spinning, the crazier the crimp, the harder it is to get an even draft of fibers into the twist.

My skein weights varied because they had constantly shifting quantities of fiber going into the twist. I’ve been told that the industry standards allow for a 10% flex room, but I decided to be conservative and label the skeins at 94g apiece. Most will weigh more, one or two may weigh a little less, but you’re getting the same yardage (give or take 12 inches depending on when the operator stopped the skeining machine and tied off the ends).

Then came gauge. I sent samples to several people to swatch, and at the Knitter’s Review Retreat I had 120 expert knitters swatch little samples with different needle sizes. My goal was to get as broad and fair a representation of the gauge spectrum as possible.

Here, it got really interesting. My personal preference is to keep the fabric tight, at 6 stitches per inch or more, if you want dimensional stability, durability, and the fewest pills. But that’s for sweaters and mittens and high-wear projects. I was seeing others create exquisitely doughy, tender, perfect-for-shawls fabrics at 4.5 stitches per inch.

I settled on a range of US 4-6 (3.5-4mm) needles and 4.5 to 6 stitches per inch, but with a warning that sweaters and high-wear projects should be worked at a tight gauge. Now, I just had to do one more thing to do: Get those labels onto the skeins. Luckily, I had help.

From Skein to Shawl

One of the biggest and most vital steps in bringing yarn to market isn’t the scouring or spinning or dyeing, it’s when you seek to show people what the yarn can do on the needles. You can’t begin to knit until the yarn is ready, which meant several weeks’ delay between skeins and garments. I asked a few close friends to take the yarn out for spin and show us what it could do. 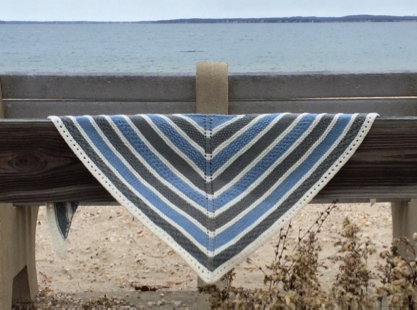 Jane Cochran picked her favorite color combinations for North Sea. Her goal was a relatively quick, easy, lovely shawl that would work well in single colors or stripes and knit up in time for the holidays. 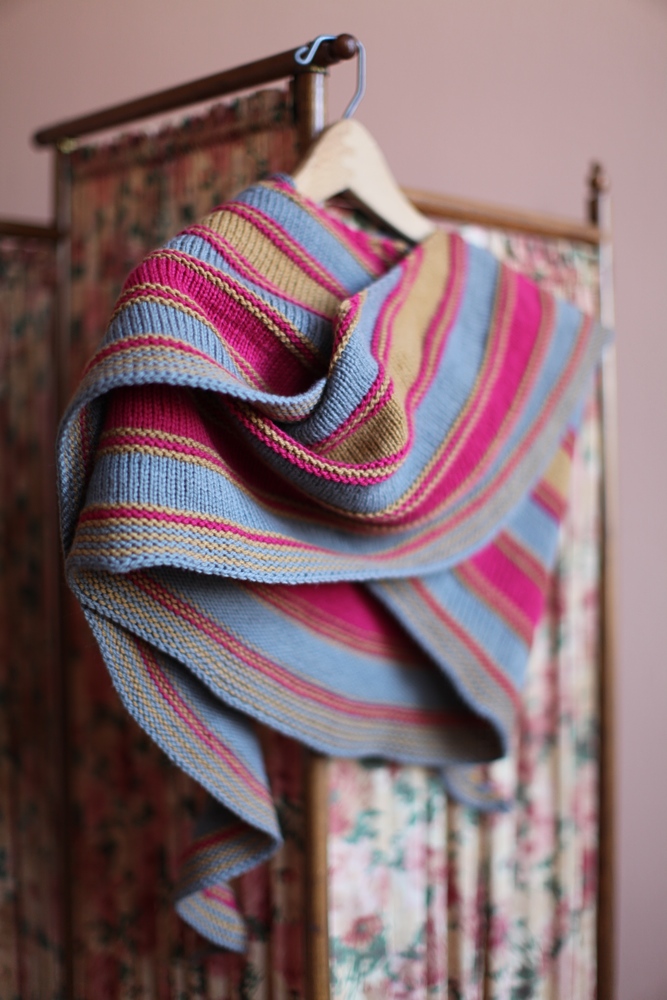 Whenever I go into Jennifer Heverly’s Spirit Trail Fireworks booth, I covet the same sample garment: Puck by Boo-Knits. It’s a simple half-moon shawl with broad brushstrokes of stockinette color offset by contrasting purl ridges. Nutmeg Owl swiftly knit up this sample (shown at left) with the Silver, Gold, and Raspberry. 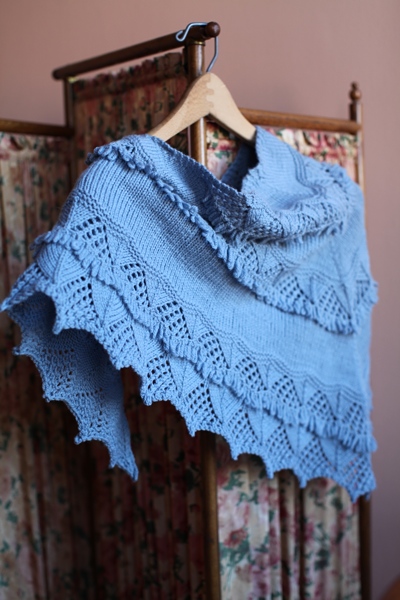 Another swatcher at the Knitter’s Review Retreat, Susan, came up to me, iPad in hand, and showed me all the gorgeous shawls that would be perfect in Cormo 2.0. We decided on Hiroku Fukatsu’s Frida loop-knit triangular shawl, which was originally designed for Brooklyn Tweed’s woolen-spun Loft. (Shown above in Sky.)

Cormo 2.0 comes in 268 yard (245m) skeins weighing 94g and priced at $28. The initial December 4 release features a natural color (“Sheep”) and five mostly solids from the Saco River Dyehouse. You’ll find Cormo 2.0 at Clara Yarn, although the small number of skeins produced means it may well be sold out by the time you get there. Please subscribe to be notified whenever I post new yarn. I’d love to share my yarn-making adventures with you.

A Yarn is Born

There you have it, the saga of one bale of wool and a precious number of skeins that will be in some of your hands soon.

I bow to those companies that do this work every day, year after year, in much larger quantities than I. Likewise, I tip my hat to those farmers who get up every morning to feed the flock, and to the mill workers who scrounge and salvage and fabricate parts if necessary to keep their equipment running for another day.

We need you now, more than ever.