As knitting began its meteoric rise in popularity earlier in this decade, new yarn stores and yarn companies emerged almost overnight. There was just one problem: not enough needles to go around.

For a while, only a handful of companies manufactured almost all the needles on the market. But in the past four years or so, this has changed dramatically—especially in the realm of wooden needles. They don’t necessarily require sophisticated factory equipment to produce, only a few special tools and a skilled, patient hand.

Here’s where Sam Bolton comes in. The supportive husband of a yarn store owner in Montana, he began making knitting needles about three years ago. By the time I first reviewed them two years ago, he had already mastered the basics, producing simple, lovely needles in birch and curly maple that you wouldn’t be afraid to use.

Two years later, Sam has proven that making needles wasn’t just a passing whim. He has since expanded into a variety of other exotic woods including Cocobolo, Zebrawood, Bocote, Bloodwood, and Tulipwood.

Sam has also made some modifications to his needle based on feedback from customers. “It is pretty unanimous,” he told me, “that they want a longer taper and sharper points than are generally available from most commercial wooden needles.” 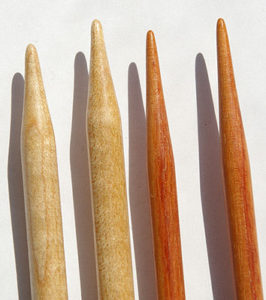 Comparing the original tips and the new ones (original tips at left and new tips at right) the difference in taper is immediately visible. The tips have lost a hint of their original roundedness without becoming intrusively pointy.

In addition to offering these needles in 10″ and 14″ lengths, Sam also now offers special 7″, 8″, and 9″ length needles at generally lower prices than their longer counterparts. He also offers 7″ DPNs. Prices vary across the board, so check his Web site for the most current numbers. 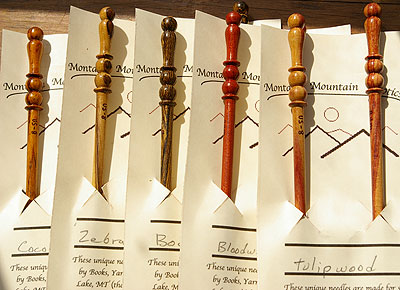 The original birch is the lowest-priced needle Sam offers. The curly maple is a light-colored wood with a rippled, shimmery grain that shifts in hue as you move the needles around in the light. Curly maple and the other exotic woods are far harder than birch and require more effort to turn into needles properly—and this is reflected in a higher price for the exotic needles (currently running up to $26.95 depending on length and wood).

Bloodwood is a hard, durable wood with a deep cherry color. Not quite as hard as Bloodwood is Cocobolo, which varies in color from piece to piece. My sample had a walnut color with darker streaks throughout.

Also hard and durable is Tulipwood, which looks like a cross between maple and cherry—pinkish stripes move across a light honey base.

Moving up in the softness scale is Zebrawood, which is mostly true to its name. My needles had dark brown veins running through a light tan wood base.

All these woods are warm to the touch, light in the hands, and given just enough finish so that the yarn moves smoothly without squeaking or snagging. As with most wood needles, these have a slight surface drag that helps you maintain control of your stitches. 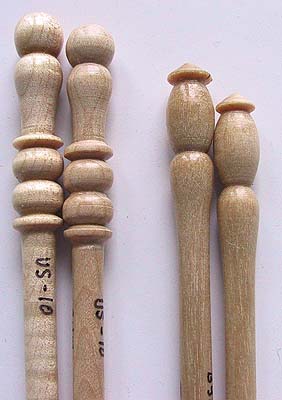 Besides the woods, the only other significant difference between the needles is in the finial. The birch needles have a simple finial design, while Sam has given all the exotics a more ornate top (see a side-by-side comparison).

Neither finials add any significant weight to your needles—they are lightweight and evenly balanced. Also, and this is an important note, the finials are carved from the samesolid piece as the needles, not made separately and then glued on afterwards. The only strange thing I encountered was a faint stickiness on the finials of the Bocote and Cocobolo needles, as if they were coated with tape residue.

The newly refined tips offer a decent balance between pointy and blunt, with a leisurely taper that’s well-suited for most knitting. I enjoyed lining up all the tips of my needles and admiring the extremely faint differences between each one—differences that won’t impact your knitting except to gently remind you that the needle was made by hand.

I like these needles because of the close connection you can have with their creator—it’s not some anonymous machine in a factory somewhere, it’s Sam in his wood shop in Montana. (You’re invited to stop by for a tour of his knitting needle “plant” the next time you’re passing through Seeley Lake.) He even writes the needle size by hand on each needle using what appears to be a standard Sharpie pen. And all of his needles are guaranteed for life, no questions asked.

Sam still accepts custom orders as well. If you really want something unique, ask Sam to make a special-order pair of needles just for you.