If we used nothing but ultrasoft Merino all our lives, we’d miss out on no end of spice and nuance in our fiber diet. And Foxen Sheep yarn, made from the wool of the Coburg Fox sheep, is all about spice and nuance.

Only some 4,000 such sheep exist in the world, and most of them reside in Germany. Prized mostly for their tastiness, these sheep also grow an intriguing fleece that spins up into an equally unusual yarn. 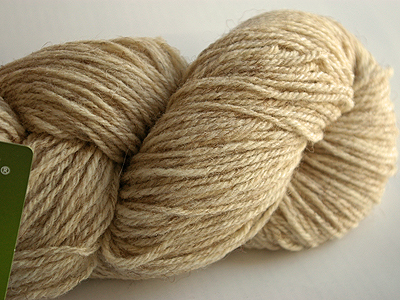 The fibers have medium staple length, a highly jumbled crimp, and a discreet but alluring luster.

Like the Tunis, Coburg Fox lambs tend to be born with a chestnut-brown fleece that lightens to a light cream after the first year. And, as with the California Red (which has Tunis genes), the Coburg Fox fleece is peppered with slightly coarse, dark red fibers. It’s an unusual yarn.

Why haven’t we heard more about Coburg Fox wool? Two reasons. First, it’s not that common. And second, but perhaps more important for today’s market, the average micron count of Coburg Fox wool is 30 to 34. To put that in context, finewools, such as Merino, tend to be 25 microns or finer, and the commercial textiles market considers anything above 30 microns to be carpet wool.

This yarn exists thanks to Danica Mader Jully, a passionate knitter and owner of Nature’s Luxury in Germany. A few years ago she learned that just a handful of native sheep breeds still existed in Germany, and she fell in love with the unusual fleece of the Coburg Fox breed.

Seeking to create a truly local (for her) yarn, she secured the fleeces and, through one of the last remaining spinning mills in Germany, created Foxen Sheep yarn.

You can buy Foxen Sheep in 219-yard hanks in both a natural off-white (shown here) and 16 colors. 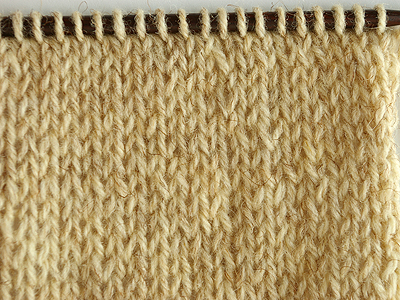 Foxen Sheep is an extremely easy yarn to knit. Spun worsted for strength and luster, the yarn still has plenty of loose fiber ends that grab onto one another and hold tight with each stitch. This provides better fabric cohesion, and it also means that if you drop a stitch and fail to discover it until you’ve worked several rows, chances are high that the stitch will still be sitting there, patiently waiting for you to return.

I swatched two skeins, one in Oatmeal (shown above) and one in Pink Tulip. Neither skein had any knot or other irregularity.

The label gives you a generous range of needle sizes from US 4-8. I began with the largest size, shown in the swatch at the top of the page, but found the fabric a bit too open and aimless for my taste. Bumping the needles down to a US 7 brought much more cohesion to the fabric—and I suspect you’d have the perfect tight and insulating fabric for a winter hat if you went all the way down to a US 4. 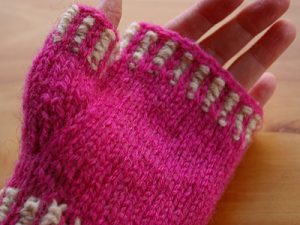 The grabby and cohesive nature of the fibers makes this yarn ideal for colorwork, while its gauge and disposition are ideal for speedy projects. Within an hour, I knit up this Swatch Mitt using Pink Tulip as the main color, and adding Oatmeal wherever the pattern calls for purl stitches.

The yarn behaved itself throughout all swatching, whether working flat or in the round. Not once did it snag or otherwise pose problems. The only occasional delay came when the yarn would become overtwisted, forcing me to dangle the work and let the twist release itself.

Coburg Fox wool has a rather dry feel to it—even, believe it or not, when fully submerged in warm soapy water. My pink swatch released a very faint poof of color in the wash but immediately rinsed clear.

The washed swatches blocked to shape without any change in stitch or row gauge. They did uncurl and relax a little, with just a hint of bloom appearing along the fabric surface—just enough to make the fabric look done.

In terms of strength and durability, Foxen Sheep gets five gold stars. This yarn has extraordinary durability. It does not want to pill. Period.

But in terms of touch, it’s tricky. Its average micron count puts this yarn squarely in the realm of outerwear. How “outer” depends on your personal sense of touch and comfort. Foxen Sheep would quite happily let itself become a pair of mittens or a splendid winter hat—the more colorful or textured, the better. And it’s even willing to become a thick pair of boot socks, if your sense of touch permits, and if you use the smallest possible needles to strengthen the fabric. As a sweater, for most people it will require that you wear a long-sleeved T-shirt or turtleneck underneath.

Some yarns have skein appeal, that certain va-va-va-voom that makes them irresistible. Other yarns seem stand-offish at first, only showing their true colors after you start working with them. Foxen Sheep definitely falls in the latter category. If yarn were food, this would be the chili pepper, the bowl of kimchee, the thick slice of hearty whole-grain bread. It’s not trying to be Ketchup or Wonder Bread: It is what it is and should be judged on its own merits.

If you’ve read this review and are preparing to pinch your nose and shake your head “no,” do consider giving it—or one of its equally gruff but endearing cousins—a fair try. You never know, you may just like it. And even if you don’t, you’ll still end up with a warm and extraordinarily well-wearing garment that tells a great story.