What makes a yarn split? I get asked this question a lot, and the answer is complicated. At a very high level, yarns can split if the fibers lack sufficient cohesion to hold together, or if they’ve been given insufficient twist at any step of the process. But that’s not even half of it.

Yarn is a continuous stream of fibers to which twist has been applied. The first place to look when questioning splitty yarns is twist: Have the fibers been given enough twist to hold together, or will they quickly un-twist into a vulnerable state on your needles? That question alone would be a pleasant place to stop, were it not for the fact that some of the most splitty yarns I’ve used also had a great degree of twist and ply to them.

Therefore, we move to the next piece of the puzzle: the fibers themselves. What are they, and what is their intrinsic nature? Not all fibers enjoy each other’s company without the force of twist. Crimpy wools like Merino, with microscopic scales along the fiber surface, are much more likely to hug one another and not surrender to a stray needle tip. Slick, scale-free fibers such as silk or bamboo (or even a wool fiber that’s been buffed smooth through machine-washable treatment) may, when twist is removed, sit on your needle like desserts at a buffet, just waiting to be picked up by your needle tip.

Sometimes the issue isn’t in the spinning of the individual strands but in the plying. If each strand is too happy on its own, to firmly and cohesively twisted together, it won’t want to mingle with its neighbors in a plied yarn. The slightest nudge of the needle tip and that ply rolls away from its neighbor all too readily. 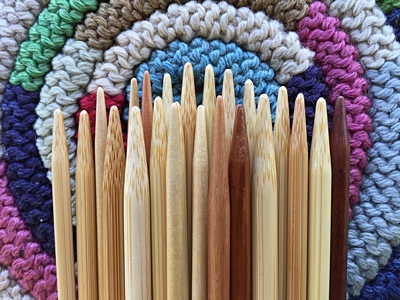 Tip of the Iceberg

Much of the mystery of splitty yarns lies not in the yarn but in the needles with which you work it. Specifically, the needle tips. If they don’t get along with the yarn’s fibers, twist, or ply construction, if they assault or intimidate the fibers and strands, you’re headed for splitsville. Change the needles, and you may live happily ever after.

In my yarn reviews, I often tell you the type of needle I used for my swatch, not just mentioning the needle material but also its tip. Was it pointy? Did I start with pointy and move to blunt, or vice-versa? And what does “blunt” mean, anyway?

Let’s walk through some common examples of needle tip types, and the scenarios in which you’d want to use them. 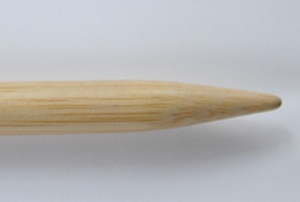 If needles were writing instruments, a blunt needle tip would be the thick beginner’s pencil in need of sharpening. The tip has been dulled and buffed to a rounded finish, but with a taper that still allows stitch maneuverability. The blunter the tip, the wider and flatter the surface area that’s pushing into the fibers and/or plies of your yarn.

Some of my favorite blunt-tipped needles are bamboo ones from the likes of Takumi Clover or Lantern Moon, though Addi Turbo needles offer a satisfyingly slick metallic counterpart.

The bluntness is helpful if you already sense snagging problems. Say, for example, you’re working with a loosely twisted, loosely plied, bulky alpaca yarn. On the other end of the spectrum, you could have a highly processed S-on-S cablespun Merino whose plies pop apart even when you play with the skein. In both cases, you probably won’t be needing the nimble maneuverability of a speedboat. You’ll prefer this snub-nosed tugboat of a needle, which will safely and comfortably steer the yarn from row to row.

These tips are also helpful when you’re working a sea of the same—say, stockinette or very simple ribbing—and want to be able to look at other things while you knit. The more blunt the tips, the less likelihood of any uninvited passengers hitching a ride on your needle when you were watching that movie.

The unsung, unsexy hero of the knitting world, blunt can be your friend. 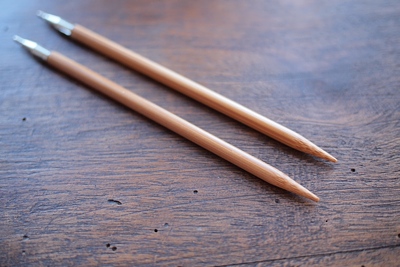 Sometimes you want just a little more of a feeling of control and precision while still being able to work at a carefree pace. That’s where the midrange tip comes in handy. Most needles fall somewhere in this midrange category, somewhere between the snub-nosed tugboat and the knitter’s version of a hypodermic needle. It has a slightly diminished surface area at the tip, giving greater agility but also raising your risk of unintentional incisions into the fibers and plies. The midrange tip is a superb everyday workhorse that’ll get the job done safely while still giving you a little thrill.

Brittany makes some of the loveliest birch needles on the pointier side of midrange, as does Sam Bolton of Montana Mountain. Also on the more precise side of things is the Chiaogoo Twist and Spin interchangeable sets (shown above), which come in both stainless steel and bamboo.

If you’re looking for something a little fancier and are willing to slow your pace just a tad, consider one of the Ernst glassworked needles. The tips are pointy enough for precision without danger. 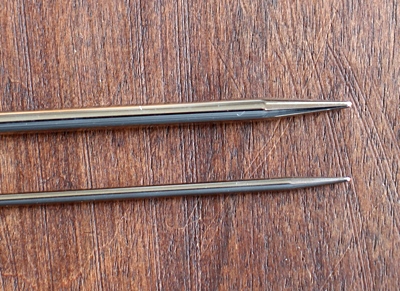 Most of the biggest needle news of the last few years has been in this pointy range, prompted by Knit Picks Options needles and followed up with the very similarly constructed, equally pointy needles from Knitter’s Pride (known in the EU by the name KnitPro). While the colorful wooden needles helped Knitter’s Pride make their mark, the newer metal-tipped Karbonz have quickly become the preferred standbys for many.

Pointy-tipped needles convey a feeling of precision and control, a tactile pleasure perhaps carried over from the satisfying feeling of holding a fine-tipped rollerball pen. What we forget, however, is that they bring with them a responsibility. In diminishing that surface area to a bare minimum of a pinhead, you have removed the training wheels, you’ve removed the seatbelts and even the airbags in your knitting. You are now working with sharp tips that, if placed with any degree of imprecision, will penetrate your yarn and pull the fibers or strands apart, causing snagging.

If your yarn is cohesive, if the fibers have good grab to them and have been twisted and plied correctly, you’ll eventually be able to gain speed and make good progress. But if your yarn is anything less than ideal, or if your attention span is elsewhere, if you tend to engage in distracted knitting, pointy tips can be dangerous. In fact, the real responsibility with pointy-tipped needles may simply be in having to pay attention.

Still, this is by far the most popular category of needle tips. My personal favorites are the Addi Turbo Rockets and Sock Rockets (shown above, at bottom, against a Turbo tip for comparison), which have the same slick surface and quality construction of Addi Turbos but with a satisfyingly precise yet rarely meddlesome or dangerous tip. Another beautiful alternative is the nickel-plated Northern Light needles from Dyakcraft.

I’ll Take One of Everything

Some needle companies actually let us pick the tip type. Signature Needle Arts started the trend, offering three tip profiles that range from Blunt to Middy to Stiletto. Recently Addi upped the game with FlipStix DPNs, which feature a classic blunt Turbo tip on one side, a lace point tip on the other. Depending on what you’re knitting and how the yarn is behaving, you have two tip types at your disposal.

I hope that all this talk of tips has reinforced the importance of having a well-stocked toolkit. Owning multiple kinds of needles in the same size is not duplication, nor is it an extravagance. It’s a luxury, yes, but one that will fuel a lifetime of pleasant, productive, snag-free knitting.