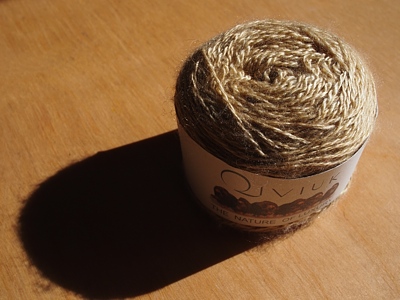 Consider the Arctic muskox, a majestic mammal that lives in extreme conditions. To stay warm in the dead of winter, it produces one of the finest fibers grown by a living animal: qiviut. Softer than cashmere and eight times warmer than wool, qiviut is also one of the most expensive fibers on the market.

But here’s the thing. On its own, qiviut can sometimes actually be too fine, too flyaway, too ethereal. Blend it with a more substantial companion, say, silk, and you bring the angels down to earth. Not only that, but you lower the price tag.

Which is where Qiviut Royal Blend enters the picture. This yarn combines equal parts superfine, ultra-warm, matte and crimpy qiviut and slinky, shimmery, bright, high-drape mulberry silk. It’s the fiber equivalent of blending oil and vinegar. If the two fibers aren’t perfectly amalgamated prior to spinning, they’ll quickly separate on the garment. Done right, the qiviut will rise from the silk like morning mist, never evaporating into thin air. 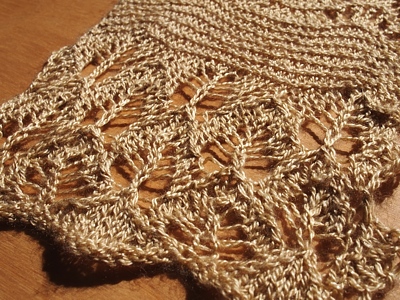 Depending on your project, Qiviut Royal Blend can be knit at a variety of gauges. You could pull out some tiny needles and make a rather dense stockinette. It’ll never be stretchy, the silk will see to that. But it will be cohesive.

Or you could open up the needle size, say, to a US 6 or 8 (4-5mm), and let the lace soar. The larger the needle, the bigger your paint brush and the larger the canvas will need to be in order to paint a complete picture.

I chose to play with a pair of US 8 (5mm) bamboo needles. The bamboo helped me maintain control of what is otherwise a fairly slinky blend. I began with a traditional Feather and Fan pattern, then moved to a simple garter-stitch, and finally tested Qiviut Royal Blend in a more detailed, architectural lace motif. It behaved like an Italian race-car, deftly taking every curve I threw at it.

Spending $70 on a skein of yarn can make you a little nervous when it comes to washing, but fear not. Qiviut will not felt. I washed my skein using standard, no-primp procedures and it fared perfectly. [Note: When this yarn was first reviewed in 2012, $70 was the price per skein. As of 2016 it is $83 per skein.]

. My skein instantly disappeared beneath the bubbles, relaxing to the point where I could barely feel it in the water. I gave it several healthy swishes, and then I let it rest for a minute before gently lifting it out and squeezing the excess moisture.

I refilled my bowl with the same temperature rinse water (more out of habit since, again, qiviut doesn’t felt), rinsed my swatch, and then unfolded it on a plush towel and let it dry. Silk has no elasticity, so I didn’t even need to pin my swatch to block it. I simply tugged and stretched until I liked the look of the fabric, then I went away. When I came back, it had dried into perfect shape.

The best part was when I lifted it from the towel—it peeled off in a thin, luxurious sheet like a pair of silk stockings. 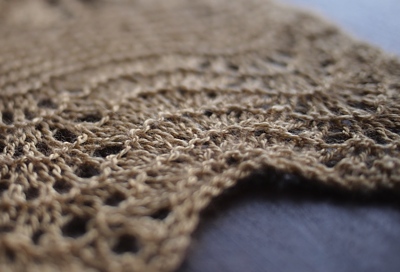 Mills will always add oil when spinning fine fibers like qiviut or cashmere. If they don’t, static electricity will soon build up and cause everything to go “boom.” Some yarn companies will leave a bit of the oil in the yarn, others wash it all out. Windy Valley Muskox does the latter. Even on the skein, the fibers are already in full bloom.

With such fuzziness already underway, I was a little concerned that the bloom would quickly dissolve into pills with wear. Agreed, this yarn isn’t a candidate for high-wear garments anyway. Socks would be a very bad idea, partly because of abrasion, partly because there is no elasticity. But even in shawls, if your yarn begins to fall apart it’ll leave fuzz all over everything.

This one doesn’t. Even after a week of steady manhandling, I could still rub my swatch against black knitted fabric without leaving a single wisp of fuzz behind.

By its very nature, knitting a gift for someone is a clear indicator that you care. But when you’re faced with a situation where you want to add even more “specialness” to the outcome, consider a yarn like this one. One skein will be more than enough for a Pretty Thing or a Madeira scarf.

What I love most of all? It’s not even the most expensive option.

You can take the $25 you saved by not buying a skein of pure qiviut and put that towards, dare I suggest it? A little something for you.