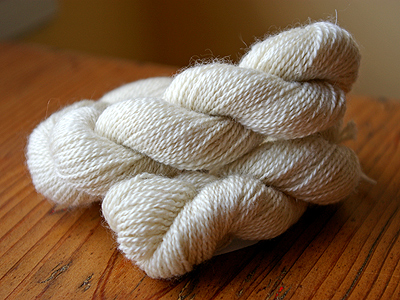 The global cashmere market has had its share of booms and busts. Some of the most significant changes came within the past two decades as our thirst for inexpensive cashmere led to overgrazing and, ultimately, the desertification of Mongolia.

While the bulk of the world’s cashmere still comes from Mongolia and China, attempts have been made to raise cashmere goats in other parts of the world—with decidedly mixed results.

All cashmere is fine, but the finest fibers tend to be grown as a form of self-defense against extreme climates and harsh dietary conditions. When we take those same animals and coddle them with good diets and shelter from the cold, the fiber quality can suffer.

For a successful and sustainable cashmere market to take hold in other regions, selective breeding and regular fiber testing become the farmer’s best tools. If they can identify and breed those goats that produce fine fibers no matter what, then they can build a great flock.

That’s exactly what Ravenwood Cashmere has committed to do at its Spokane, Washington farm. The first cashmere goats arrived at Ravenwood in 2008. Last year, Ravenwood began sourcing fibers from other U.S. cashmere farms that are also committed to the same goals of quality and sustainability.

At Ravenwood and its partner farms, all goats must undergo histogram analysis twice each year to keep close tabs on the quality of fibers that the animals are producing. (A histogram analysis shows average fiber diameter, standard deviation, coefficient of variation, and the percentage of fibers over 30 microns—vital numbers if you’re seeking consistently fine fibers.) The fibers are harvested and sent to mills with the equipment and expertise to handle fine, short fibers without breaking them.

The cashmere is minimally processed without any of the harsh chemicals that could damage the tender fibers. The resulting yarns—a lace-weight two-ply and a fingering-weight three-ply—are sold in pure undyed shades on the Ravenwood Cashmere Web site. 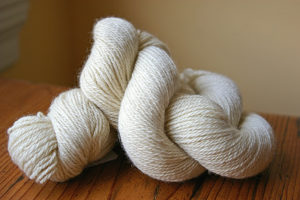 The three-ply version (at left) is quite possibly the loveliest and most substantial cashmere yarn I’ve ever touched. Yet I fear its $70 per 220-yard skein price just is too high for many readers.

I’ll focus on the equally noble lace-weight two-ply, whose 200-yard skeins retail for $35 apiece. Still, if you ever find yourself with $70 to spare and a desire to experience the ethereal, indulge in a single skein of the three-ply.

Right out the package, the yarn had a strong herbal smell that reminded me of the soap section of my local co-op. In addition to raising cashmere goats and Italian Maremma Abruzzese guard dogs, Ravenwood Cashmere also makes goat milk soaps. This wasn’t a synthetic fragrance likely to touch off any chemical sensitivities, but it was a strong fragrance nonetheless. 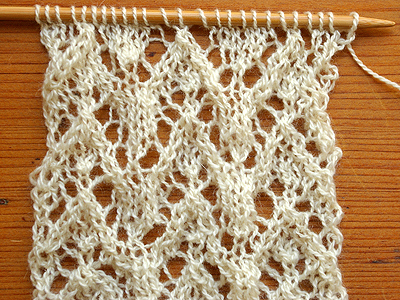 The yarn itself is visually delicate and precise, with a remarkably even spin. Despite its delicate appearance, the yarn is actually much stronger than most lace-weight cashmeres. It also has an unusual sheen, perhaps a result of the tighter twist. I found no knots or irregularities in my skein.

Lace-weight two-ply yarns, especially ones as halo-prone as cashmere, thrive in stitch patterns that incorporate large amounts of open space. The two plies are constantly pushing away from one another, holding open the space around them.

I chose the Dainty Chevron pattern from Barbara Walker’s Second Treasury of Knitting Patterns and got swatching. The yarn behaved perfectly, only coming untwisted and snagging once or twice and always at the last stitch in a row. Lace is tricky to knit by touch alone, although with the right needles and a good amount of courage, I suspect it would’ve been possible. 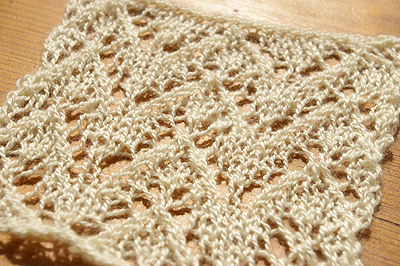 My swatch held up beautifully in the wash. The instant it hit the warm soapy water, it wilted like a tissue dropped in a puddle. Undaunted, I gave it several vigorous squeezes and squishes, then rinsed it in warm water and blotted it dry. Even then, my swatch retained a remarkable degree of liveliness.

Once dry, the swatch had fully pulled itself back together into a bouncy, huggable piece of fabric that I only wished I’d knit large enough to wear. Only a small halo emerged. The bounciness, high luster, and low halo are quite unusual in a lace-weight cashmere. I attribute both to the tighter than normal twist, but I suspect that genetics also play a part.

Ravenwood makes a point of advertising that it doesn’t use kid fibers in its yarns. Although they are the softest, they are also the most vulnerable to breakage and pills. Perhaps this has something to do with the yarn’s strong and lustrous behavior.

A 100% laceweight two-ply cashmere is innately delicate. Some such yarns pull apart easily, but the Ravenwood required a good tug to break.

My lace swatch endured abrasion remarkably well, gradually releasing those tightly twisted fiber ends and bringing out that much-desired halo. The ends never gathered together in pills, however, nor did any part of the swatch grow so thin that I feared breakage.

As fond as I am of cashmere, I still wouldn’t recommend the two-ply for any high-wear garments such as socks or mittens. The yarn longs to be a scarf, shawl, or cowl, its softness and extraordinary warmth working its magic as close to your skin as possible.

Ravenwood has wisely partnered with knitwear designer Jen Hagan to create patterns optimized for the construction and quality of its yarns. The two-ply was really made for lace openwork, while the three-ply begs for the three dimensionality of cables and seed stitch—both traits Jen has used in her patterns. In my dreams, I’d knit a perfect pair of socks from the three-ply, worn only on special occasions. The only thing stopping me is the $140 price tag for such an endeavor.

We know cashmere to be expensive, and this cashmere is particularly expensive. The fibers in this yarn do not come from Mongolian nomads being paid dollars per pound. They come from farms in the United States, whose cost of doing business is innately higher.

You can estimate that the average cashmere goat will produce about four ounces of pure cashmere each year. The one ounce of fiber in each skein of the two-ply yarn thus represents one-fourth of that animal’s total yearly fiber production—and the three-ply yarn contains one-half the animal’s yearly output. If you do the math, that means each animal generates only $140 in revenue per year. Subtract the costs of care, feed, fiber processing, and spinning, and I doubt that even $35 a skein starts to cover the bill.

I still think it’s important to support what Ravenwood is trying to do. For starters, by partnering with like-minded farmers they will gradually be able to benefit from an economy of scale and bring down their costs. But more important, they’re helping grow a market that will support both farmers and knitters alike, while keeping a steady eye on improving fiber quality and treading gently on the environment.

Fortunately, the yardage on both the two-ply and three-ply yarns is generous enough to merit a single-skein project if your budget is tight but curiosity piqued. Jen Hagan’s Bavarian Mitts make judicious and creatively fitting use of a single skein of the three-ply. Meanwhile, Susan Pierce Lawrence’s Fountain Pen Shawl would be splendid in the two-ply. If you skipped a pattern repeat or two, you could get a lovely shawl out of four skeins (800 yards), which translates to $140.