The Joy of Rewinding: How to Recycle Previously Loved Yarn 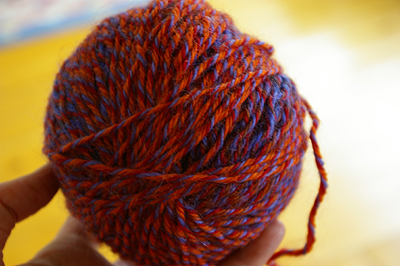 We’ve seen them before, those sad and lonely balls of yarn from projects that were abandoned, frogged, and eventually discarded.

These yarns often occupy a place of shame on swap tables throughout the land, representing failure, regret, and unfulfilled ambitions. We glance at them briefly before quickly turning our attention away to other fresher, newer skeins, still in their original packaging.

These lonely cast-offs represent a knitter’s bounty, and restoring them to their former glory is extraordinarily easy. It’s also a fully satisfying pastime when you’re eager for yarn contact but need a break from the needles.

To Your Winding Station! 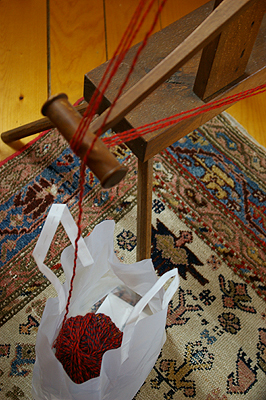 The first step in recycling old yarn is to rewind it into a hank. You’ll need a swift, niddy noddy, skein winder, click reel, or any other kind of tool that lets you wind yarn into a large loop with a circumference of approximately two yards. The circumference doesn’t need to be exact, it just needs to remain consistent. Which is why the willing hands of a friend can sometimes be a challenge, especially for larger hanks.

As soon as you begin winding the hank, your ball of yarn is going to hop all over the place. It helps if you put the ball in a container to keep it from bouncing around. I use a simple plastic bag with tall sides. 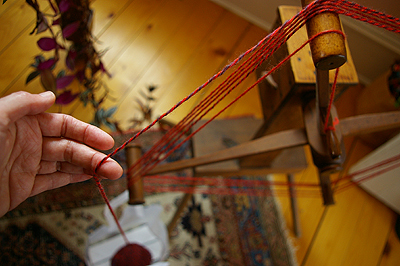 Hanks are happiest when wound under a steady tension. Nothing does the trick like a humble index finger. Normally gravity does the trick, but, if you have a particularly unruly yarn, you can pinch it gently between your index finger and thumb for greater tension. 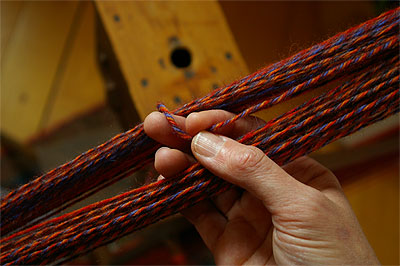 When you’ve finished skeining the ball of yarn, you’ll want to tie the end so that it stays secure. I find a simple figure-8 does the trick.

Leaving at least six inches of tail to work with, poke your fingers through the middle of the hank. Holding the originating end of the tail right where it is, slip the end over the left side and around to the back… 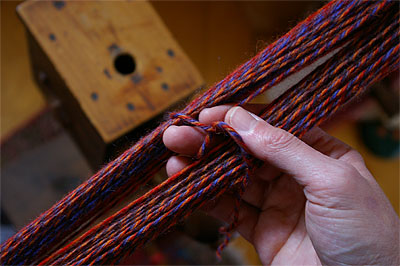 …and then pull it up through the hole in the middle, being sure to slip it through the loop you just formed. In the knot world, this is called a half-hitch. 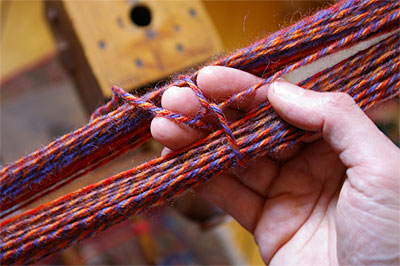 Now you’ll want to repeat this process to form a second loop, and a second half-hitch, around the other half of the skein. 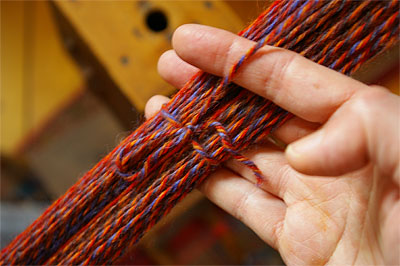 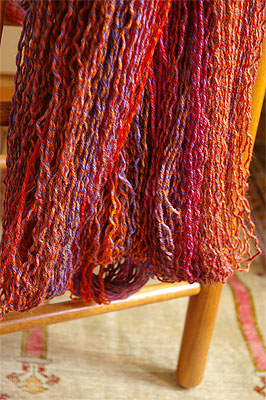 If the yarn spent any time as knitted fabric, it will revert to its former kinky self as soon as you pull it off the winder. That’s because it is no longer under tension. Stop here and you won’t do the yarn nearly enough justice.

Update! Since I first wrote this article, I’ve learned of another clever way to bypass the next step and end up with a nicely wound ball of un-kinked yarn that’s ready for action. It involves a strategically located swift, gently simmering tea kettle, and ball winder. See where I’m going here?

Take the yarn from the swift, pass it over the steam from the tea kettle, and then onto your patiently waiting ball winder, where you’ll wind the yarn into a ball. The steam settles on the fiber and helps the yarn relax under the slight tension of being wound into a ball.

Warning: Do be sure to keep the tea kettle simmering on the lowest possible heat. You won’t want any flame to get in the way and ruin a perfectly good frogging session. 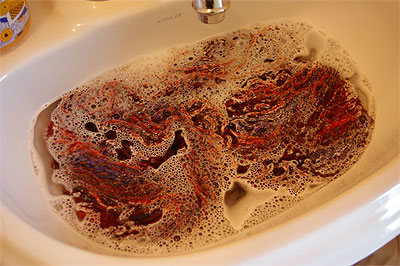 All your yarn needs is a nice warm bath to relax and calm its nerves. This bath is also a great way to rid your skein of any residual cooties from its previous foray onto the needles.

Because most abandoned oddballs do not come with care labels, this step also gives you a chance see how the yarn behaves in the wash. Does it bleed like mad, disintegrate, or felt into an unmanageable mess? Better to find out now than after you’ve spent countless hours knitting with it, right?

Whether it’s in a hank or in a garment, I generally follow these steps for washing yarn. If it’s a particularly funky skein, I may wash it in a gentle detergent, such as Ivory Dish Soap, Soak, or Unicorn Fibre Wash. For somewhat gentler washings, I’d use Eucalan or Kookaburra. All are equally effective, and most knitters have their favorite.

If you suspect the yarn has wool, alpaca, or other animal-based fibers in it, you can also add a dab of hair conditioner to the rinse to help revitalize the fibers.

The longer fibers stay in their warm sudsy bath, the more they relax. We want this, so I recommend you let the hanks soak for at least five minutes before you rinse and squeeze. 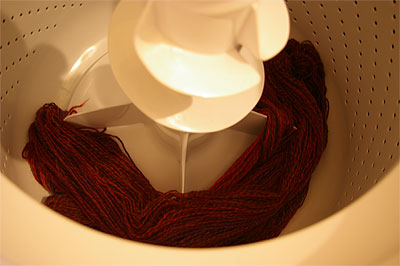 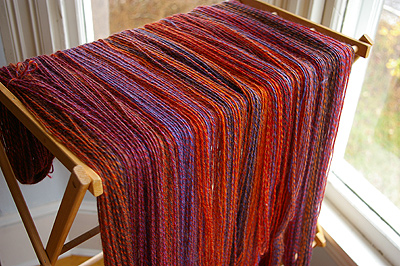 Now comes the best part, setting out your sparkly clean and fully rejuvenated yarn to dry. Some people will hang small weights on the hanks to remove any residual kinks. While this step can be helpful when recycling yarn for weaving, I find it overkill for most handknitting uses. It can make low-elasticity yarns even less elastic. And with highly elastic protein fibers such as wool, it’s also rather misleading. All that bounce will return again the minute those hanks hit their next warm, sudsy bath.

If you’ve soaked the fibers long enough, they shouldn’t have any kinks left at this stage. It’s far better to let the yarn dry naturally, aided only by gravity. 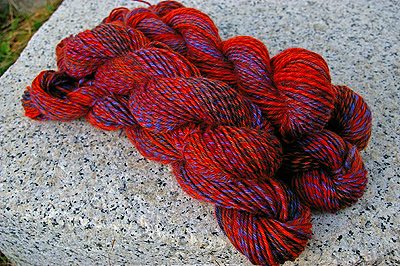 Once your yarn is dry, you can twist it into a pretty hank and set it out to admire. If you’ve never twisted a hank before, it’s very easy. Simply slip your hands into the hank so that it runs around the outside of your hands (imagine holding a big rubber band open with both hands). Now rotate one hand so that the whole hank twists on itself four or five times (more or less depending on the bounce of the fiber). As you get more comfortable with these moves, you’ll learn how to rotate the other hand in the opposite direction to speed up the twisting process.

At this point, if you bring your hands together, the hank will kink up on itself. You’ll need to tuck one end through the loop of the other and then work to even out the twist, so that the hank looks remotely like what you see in stores.

I find it much easier if you secure the middle of the hank under your chin and then bring your hands together. This will give you a beautiful, evenly twisted hank that will be the pride of swap tables everywhere—or of your very own stash.

The Sock-Knitter’s Companion: How to Knit Socks