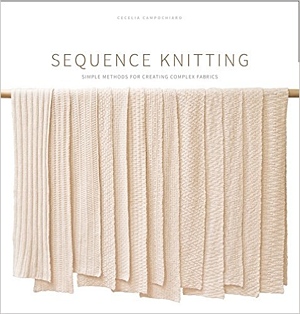 It began with a simple idea: By repeating a certain sequence of knit and purl stitches again and again, you can create gorgeous and often reversible fabric. This is the same concept behind basic ribbing, seed stitch, mistake-rib stitch, and the like—but on steroids.

The concept is so simple, in fact, that Cecelia Campochiaro was surprised nobody else had explored it. She spent four years doing just that, with the methodical mind of a Silicon Valley engineer and the passion of a lifelong knitter. This book—a stunning, 387-page tome weighing over four-and-a-half pounds—is the result of her work.

Campochiaro may be a newcomer to the world of knitting, but she partnered with a strong team. The book was tech edited by Renée Lorion, who cut her teeth at Vogue Knitting; and designed in collaboration with Vanessa Yap-Einbund, co-author of Ori Ami Knits and designer of both the Habu and Woolfolk websites. It comes with the back-cover endorsements of brioche queen Nancy Marchant and Catherine Lowe, one of the most intelligent and sophisticated designers I’ve ever met. Which is to say, this book has both intelligence and pedigree.

If you were to leaf through the book quickly, you might get a sense of deja vu from some of the swatches, which do look alike. Pause, look more closely, compare the charts, and you’ll begin to see the magic and nuance that’s possible in sequence knitting: “…the freedom to create complex fabrics without having to follow charts or detailed instructions.”

The stitch patterns in this book—really almost like fabric textures or motifs based on different repetitions of knits and purls—are provided in written and charted form. All motifs are photographed on both sides, a tiny nuance few other books bother to do, perhaps for the simple reason that the reverse side of many pretty stitch patterns can be rather unremarkable. Here, they are not. They’re often reversible, always intriguing.

All the swatches were knit in the same grey yarn—chosen, she explained to Tom van Deijnen in an interview, so that the readers’ imagination could fill in the color blanks themselves.

This is an intelligent book (you’ll find binomial coefficients and computations involving n) but it’s also extremely easy to work through at face value, swatch by swatch. If swatching for swatching’s sake isn’t your thing, you’ll also find several charmingly simple patterns for cowls and scarves, each illustrating a different characteristic of sequence knitting.

Perhaps what I love most is the fact that Campochiaro does not claim to have invented anything.

Perhaps what I love most is the fact that Campochiaro does not claim to have invented anything. She was introduced to the notion of sequence knitting while working Stephanie Pearl-McPhee’s One-Row Handspun Scarf. That scarf may have sparked ideas, but Campochiaro still doesn’t claim ownership of any grand, entirely new and self-trademarked revelations. Rather, she refers to Elizabeth Zimmermann in suggesting that her work is more of an “unvention,” and provides an extensive bibliography for all those interested in exploring these ideas further.

This book’s impeccable execution, both technically and physically, are proof that the line between self-published and traditionally published books has disappeared. It is hefty and beautiful, comprehensive and thorough. If Cecelia made any compromises in its production, they are invisible to me.

She picks up the ball of inspiration and runs with it, producing an exquisitely subtle and geeky collection that will keep you swatching and learning—and smiling at your work—for a long, long time.

→  Buy the book from Schoolhouse Press

→  Buy the book on Amazon.com