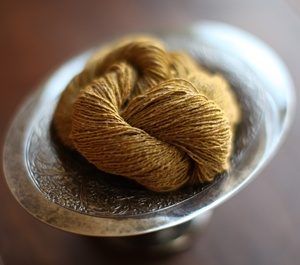 We’ve reached that point in summer where even I, the ardent wearer of wool, am switching to cooler cottons and linens—even in my swatching.

A skein of Twig was placed in my hands at the summer TNNA show in June. It has stayed at the top of my swatch pile for a very simple reason: Within its multiple and clearly distinct strands of linen and recycled silk is a teeny tiny ply of 12% wool.

Some blends are “why bother” mixes of everything but the kitchen sink. But this? Its fundamentals made sense. I had to swatch.

At 46%, the linen clearly dominates, giving a strength and density, evaporative cooling, inelasticity, and a lustrousness that’s well enhanced by the warm, shimmery silk (42%). This silk is recycled, by which I assume it is mill waste and not, say, shredded old silk tops from Goodwill.

And then there’s the wool, a tiny amount, just enough to help absorb moisture sitting along the surface of the linen and silk fibers. Pulling apart the yarn, the wool appears to make up the finest, most discrete strands of them all. It runs alongside the single strands of silk, which are then trapped by two bright, fine plies of linen that crisscross back and forth around the whole shebang. 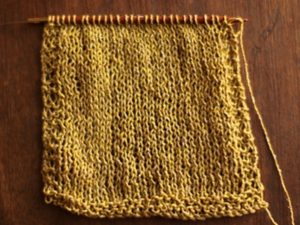 Because the 12% wool isn’t nearly enough to offset the inelastic linen and silk, I chose a pair of snub-nosed Lantern Moon wooden needles to prevent snagging. A few sloppy rows produced a snag that was nearly impossible to tug back into the yarn, but after that, I was knitting and purling easily.

The tighter I knit, the more the yarn squeaked against the needles—something easily fixable with a move to slick metal needles.

Linen and silk have no crimp to speak of, no elasticity at all, making even tension and twist crucial. A few times I got lazy and didn’t stop to smooth out the excess twist as I went, and it resulted in stitches that tilted more than the others. Whereas with a more elastic yarn you could expect that to block out, here I knew the wobble was here to stay.

Before washing, my swatch had a somewhat crinkled feel, like a piece of paper still willing to be pressed back into shape. It had a hint of a left-leaning bias, but I was able to tug it back to square. I wondered how a warm soapy bath would impact the bias.

There was never a point where I could really feel anything relax or soften in the bath. The yarn remained firm and ropelike. There was no bleeding in the wash, no odd debris in the water, and my swatch flattened perfectly, like raw pie dough being rolled out.

I measured no change in vertical or horizontal gauge in the swatch, nor could I detect a bias in the washed fabric. Alas, those wobbly stitches remained exactly as they were before.

From a fiber perspective, this blend brings a good internal balance of heating and cooling, like a well-functioning HVAC system. It has superb strength from the silk and linen, the kind that gives the yarn a satisfyingly high-pitched “ping” when tugged and an even more exquisite drape when worn. Regular abrasion won’t be a concern, though snags on rough surfaces will be.

The only other, literal wearability issue is elasticity. Ribbing will be purely decorative, and form-fitting designs may lose a little of their snug je ne sais quoi with wear. Mind you, this won’t be anything near the colossal stretch of viscose bamboo, but there will be a relaxing of fabric. Luckily, most designs for this kind of yarn have loose, open shaping that won’t degrade dramatically over time.

We’re seeing a lot of linen yarns on the market right now. Shibui Knits also offers a fingering-weight knitted tube linen called, fittingly, Linen. Quince has two gorgeous ones: the traditionally plied fingering-weight organic Sparrow, and the worsted-weight, knitted-tube organic Kestrel. And while we’re on the subject of linen yarns spun in Japan, as was Twig, Habu has some fabulous linen blends as well.

There’s something wonderfully wobbly about this yarn that overpowers my normal reluctance to work with linens. The recycled silk gives it a soft hand and a slightly irregular, almost tweedy look, while the linen adds a bright, lustrous, candycane-style marled effect. I want to see this in big sheets of fabric, and I want to wear those sheets of fabric in a clever summertime design, such as the ones from Quince or Julie Weisenberger or Lori Versaci.

The other thing to know about Twig is that it’s been designed to pair with the other Shibui yarns to produce thicker, differently textured fabrics—which opens up the design potential exponentially.