Imagine if all the wine in the world—red and white alike—were mixed together and sold as generic “wine.” Think of how many centuries of craftsmanship and flavor would be lost, and how mediocre it would taste compared with how it would taste if the grapes had been kept separate or selectively blended. Such an act would be almost unthinkable in the food world. But in the knitting world, just as much nuance is lost every day when flat, bouncy, long, short, matte, and lustrous fibers from ancient and modern sheep breeds alike are bundled together and sold as generic “wool” yarn.

I wrote those words in 2009. By then, our yarn world was just beginning to change, to embrace the local and artisanal. Breed names were starting to crop up on our labels—and one of the most promising sources for such yarns was a small company called Solitude Wool.

Many upstarts have arrived since 2009, but Solitude Wool is still consistently producing good skeins with rich stories.

I profiled Solitude Wool in 2011 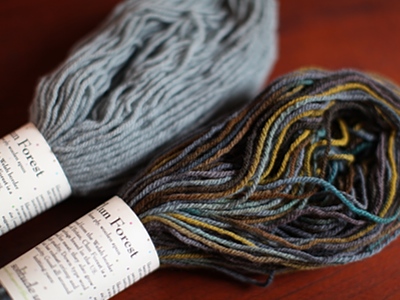 , praising the yarns but lamenting the fact that most, with the exception of sock yarn, were composed of two plies. Taking my wish to heart, Solitude introduced a three-ply worsted-weight yarn made from Clun Forest wool, which I review here.

Let me flip open my dog-eared copy of The Knitter’s Book of Wool and tell you more about the breed:

The Clun Forest takes its name from the market town of Clun in southwest Shropshire, where the breed took hold in the lowlands region’s wild, desolate marshes. Although not officially standardized until 1925, some say that the Clun Forest breed is a descendant of the sheep that pastoral and seminomadic shepherds raised in this area of England some 1,000 years ago. Whatever its origins, the breed today has evolved greatly—especially in the last 200 years. The dark brown faces and legs of these hornless sheep are a stark contrast to their dense and springy white fleece. The fiber itself is downy shortwool, which means a high but jumbled crimp, low luster, and medium to short staple length. Clun Forest fiber is happiest when spun woolen. 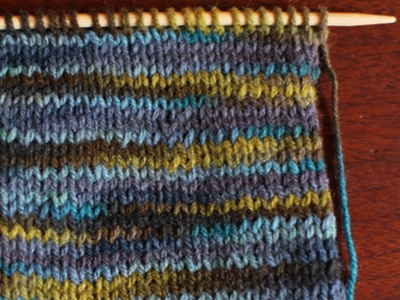 Down-type wools such as Clun Forest have crazy crimp and short staple, making them beg for a tightly twisted multiple-ply construction—which is exactly what Solitude did with this yarn. That high but jumbled crimp gives tremendous springiness to this yarn. In fact, if I were to leave you with just one impression of this yarn, it would be that of a wool bungee cord—in a good way.

Clun Forest Yarn was a breeze to knit. The three-ply construction gave wonderful roundedness to my stitches, while the elasticity kept the wool snug around my fingers. Tension on knit and purl rows was almost effortless, and I knit (and purled) by touch alone with no problems, both on slick, pointy-tipped aluminum and blunt, grabby bamboo needles.

Every few rows, all that energy built up in my yarn and caused it to kink to the point where I had to dangle the swatch and un-twist it. Otherwise, I encountered no real road blocks, no potholes, just smooth, springy knitting.

My stockinette stitches were plump and even, and the garter-stitch was deliciously three-dimensional. In bright light, the fibers had an almost icy, crisp sheen.

While the yarn had already been washed and had a distinctly poofy look to it, I suspected I might see more changes in the knitted fabric after its first bath. But first, I had to submerge my swatch in warm soapy water. I squeezed and swished but it never really felt like the water had completely penetrated all those nooks and crannies within the crimpy fibers. 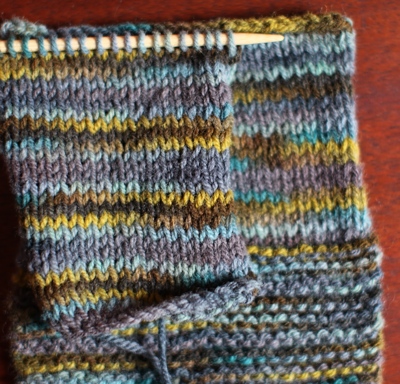 At last, I gave my swatch a final squeeze and lifted it from the bath, which had turned a light inky hue. One rinse and the water ran clear.

I prodded the swatch to shape on a towel and blotted it dry, admiring the gorgeous cohesion in the finished swatch. All that pent-up energy was gone. The curled edges had relaxed, any hints of irregularity erased.

If Clun Forest wool is so wonderfully springy and easy to knit, why aren’t more yarns made from it? The answer is in the wearing. Specifically, how the yarn feels against your skin.

In a world of baguettes and croissants and delicate puff pastries, this yarn is the hearty whole-grain rye bread. Its flavor and texture are stronger, more distinct. One slice will keep you full for hours. Which is to say, it’s a robust wool that may, if you wear it directly against your most sensitive areas, produce some prickle. (Actually, not so much a prickle as the distinct feeling of bulk. I spent the day with a substantial swatch tucked under my shirt and felt no irritation.) Wear it over something else and you’ll have a thick, impenetrable buffer between you and the cold.

The fabric itself wears like iron. Clun Forest may not be renowned for its generous staple length—in fact, it’s rather short. But the thick fiber diameter and extraordinary crimp combine to produce loft with minimum fragility. It’s possible that thick socks made from this yarn would wear thin over time, despite the excellent added durability of that third ply. But for regular outerwear, this would give you a sweater that endures.

While Clun Forest is a distinctly British breed, the fibers in this yarn were sourced from farms in Maryland and Virginia. That’s a key part of what Solitude Wool does, build enduring relationships with farmers in the Chesapeake Bay watershed. Fleeces are selected, skirted, and washed by hand. Yarns are spun each according to the characteristics of its breed.

The small-scale, high-touch nature of these yarns comes at a (literal) cost, with each 185-yard skein retailing for $37. Stashbot tells me a women’s average-length sweater with a 42-inch chest circumference would require 1120 yards, or 6 skeins. That’s $222 for something that doesn’t feel like cashmere.

But your investment is kept squarely within local economies, supporting a network of small farms and fiber producers, and you’ll end up with a garment that keeps you warm and wears like steel. If you just want to try out something easier, a Hill Country Hat would need only one skein, and if winter continues as it has been, your head will thank you for the extra warmth.