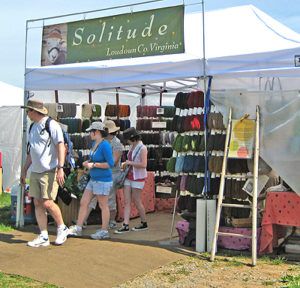 Back in 2000 when I began Knitter’s Review, I assumed it’d be easy to find out where the fibers in my yarn came from—and, in the case of wool, which sheep breed had been used. Slowly the reality sank in.

Fibers tend to be sourced from everywhere, bundled into similar lots, and sold on the open market. A broker buys the fibers, they go to the mill and become yarn, which then gets dyed and skeined and sent off to the yarn company, which then sends it off to the yarn store. By the time the skein is in your hands, most traces of its past are gone.

The only exceptions tend to be from small-scale farms. While they used to sell their products only at fiber festivals, now many farms also offer their wares online. Most tend to favor a certain breed of sheep. With each new breed you want to try, you must start your hunt all over again. 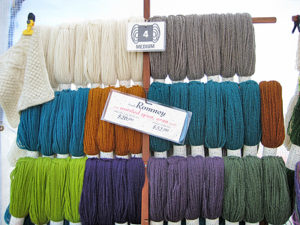 Solitude Wool changes the game by offering a wide range of breed-specific yarns sourced from Virginia farms. The fibers come primarily from two farms in particular: Solitude (tended by Gretchen Frederick and her partner Joan) and RedGate Farm (tended by Sue Bundy and her husband Bill). Visit the Solitude booth at a show and you’ll likely meet Gretchen or Sue in person.

Gretchen oversees the hand-dyeing of all the yarns, which is done using natural and (sometimes) synthetic dyes. Sue spends her spare time hand-picking assorted fleeces from other flocks in Virginia’s Chesapeake Bay region and having them spun into yarn. Their collective goal is to strengthen the overall market for small sheep farms, not just theirs. 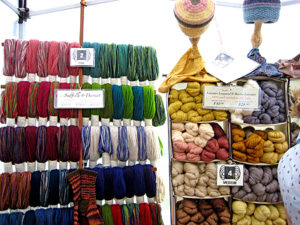 By bringing in other breeds from area farms, Solitude is able to offer a surprisingly thorough range of wool breeds. Wandering into the Solitude booth, it felt like someone had transformed The Knitter’s Book of Wool into a three-dimensional scratch-and-sniff playground. Clun Forest, Corriedale, Dorset, Shropshire, Border Leicester, Tunis, Icelandic, Romney, you name it, they’re all there. 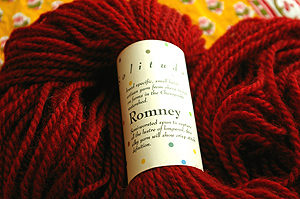 Note that they don’t just send fleeces off to a generic mill and say, “Do what you can.” Both Gretchen and Sue have a deep understanding of the fibers their animals grow.

As a result, no two Solitude yarns are identical. Each is slightly different, spun tighter or looser, thinner or thicker, with more or fewer plies, the construction dictated primarily by the fiber’s natural staple length and crimp pattern. As obvious as it seems, far too few yarn companies pay this degree of attention or even know what their raw materials look like before being spun.

As a nice extra touch, the back of each label tells you which farms supplied the fibers, and where they’re located. 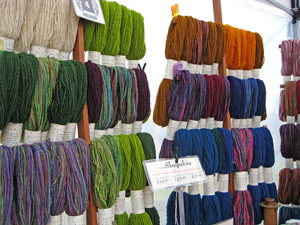 Welcome to the Web

Until now I’ve only mentioned Solitude in passing because their ordering system didn’t favor online commerce—a requirement for most of what’s profiled here.

Instead, securing Solitude yarns either involved visiting one of the events where Solitude has a booth or picking up the telephone and giving Gretchen or Sue a call.

Earlier this week, Solitude leapt headlong into the virtual world by adding online ordering to its Web site. Mind you, the inventory shown may not mirror what’s in stock at the precise moment you order since they pack up quite a bit of yarn and take it to various farmer’s markets and festivals. But if there’s ever a conflict, they say they’ll call you to make it right—and I believe they will.

When I played with the shopping cart, I was quoted $91 to ship two skeins of Corriedale to the Polynesian island nation of Tuvalu—so I assume international ordering isn’t a problem. No matter where you are, with a few clicks of a mouse you’ll be able to sample breeds and breed types that may otherwise never pass through your fingers.

My only wish is purely a selfish one. Many of the Solitude yarns are composed of two plies, the exceptions being sock yarns to which nylon has been added for reinforcement. How I’d love to see a Corriedale or a similarly robust breed spun at a heavy DK-weight, with at least three nicely rounded plies. It would be perfect for Kate Davies’ long-awaited Deco cardigan. 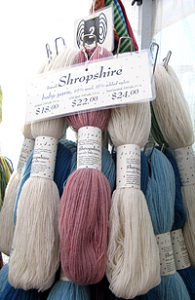 The Cost of Solitude

We can’t talk about full-sized projects without addressing the issue of price. Solitude does not benefit from the economy of scale that larger companies enjoy, many of them routinely spinning 10,000 pounds of fiber at a time. The largest flock of Icelandic sheep in the entire country barely produces that much. Solitude operates in the realm of 200 pounds or less, using fibers that were hand-picked from Virginia farms instead of from nameless animals and places via international auction. Each skein will cost more—how much so depends on the breed.

Most of the yarns run in the $12 to $24 range, with put-ups somewhere around 100 to 140 yards depending on breed and weight. In the Icelandic, one of my favorite of all Solitude yarns, the medium-sized Deco sweater would require 9 skeins and cost an average of $162. In the Tunis/Alpaca, the price jumps significantly to $290.

If that makes you as nervous as it does me, I’d begin by ordering single skeins of a few breeds at a time, letting your fingers get better acquainted with the nuance of each sheep. Plenty of low-yardage patterns exist to get you started—including my Maine Morning Mitts or Swatch Mitts.

Your hands will tell you which breeds they love most—and that’s when you can begin planning and saving for that very, very special project.