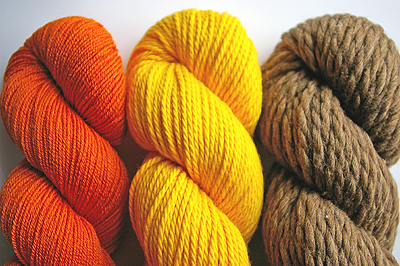 Blue Sky Alpacas (now Blue Sky Fibers) was the belle of the ball at the most recent TNNA. The company cleverly did an end-run around any confusion that may exist about its name, which leads many to believe it only sells alpaca yarns.

The company got its start as an importer of luxury alpaca yarns, and then expanded its offerings to include cotton. But still, that pesky word “alpaca” remained. Some customers just couldn’t wrap their brains around any other kind of yarn coming from this company.

What to do? Instead of changing its name or continuing to dilute its existing brand, Blue Sky Fibers did something really smart. The company created an entirely new line of yarn with a totally separate branding. The line is called Spud & Chloë. It made its official debut at the summer 2009 TNNA trade show.

Spun & Chloë’s tagline reads, “Sweet yarns for real life.” Those aren’t just gratuitous words, either. All three yarns in the initial offering are made of natural but machine-washable fibers. Good and easy.

The three yarns were also chosen to complement one another and present as full a palette as possible. They currently offer a fingering-weight, worsted-weight, and bulky, all imported from Peru.

As with all Blue Sky Fibers yarns, organic cotton figures prominently in the initial Spud & Chloë yarn trio. Cotton is arguably the most polluting fiber on the planet, and using organic fibers is not just gratuitous marketing—it is a simple but highly effective way to effect positive global change. 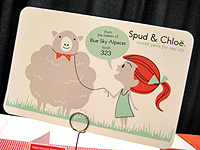 A consistent thread of cuteness runs throughout the yarn itself as well as the patterns and packaging. Patterns have been printed in black and white on large sheets of paper that get folded into tall colorful envelopes reminiscent of old Simplicity sewing patterns. As if that weren’t enough, they also offer a cute box in which to store all your patterns.

The current pattern support is heavy on accessories, from hats and gloves to scarves and children’s attire, plus a few heavier outerwear jackets and hoodies. I’m sure more patterns will follow. 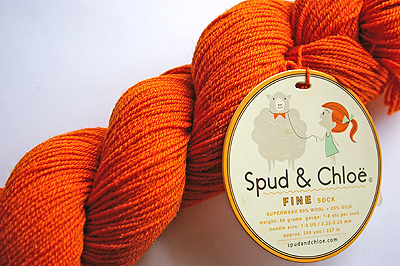 Fine
80% superwash wool, 20% silk
248 yards/65g
7-8 stitches per inch on US 1-3 (2.25-3.25mm) needles
SRP $11
Find it at WEBS.
Three strands, each of which is composed of two plies, are twisted together to create this bouncy and extremely strong yarn. Its round composition gives the yarn excellent stitch definition for lace and textured work, while the fine gauge and superwash wool/silk combination make it an excellent candidate for socks. 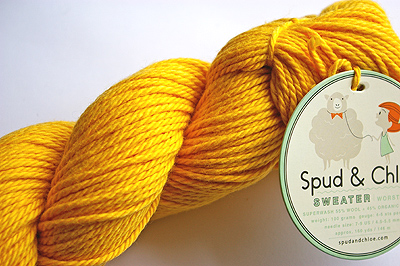 Sweater
55% superwash wool, 45% organic cotton
160 yards/100g
4-5 stitches per inch on US 7-9 (4.5-5.5mm) needles
SRP $12.50
Find it at WEBS.
Intended to be the “meat and potatoes” of the Spud & Chloë line, this worsted-weight yarn contains a blend of superwash wool and organic cotton spun together in three even plies. It’s a round, well-balanced yarn that performs equally well in basic stockinette, colorwork, and textured stitchwork. Although the wool fibers are technically in the majority, the cotton gives this yarn an undeniable “cottony” hand that will bode particularly well for warm-weather projects. 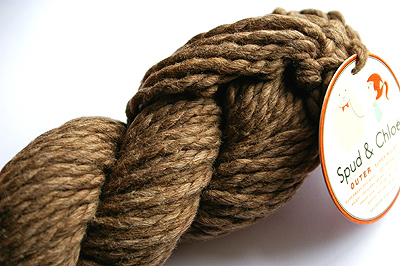 Outer
65% superwash wool, 35% organic cotton
60 yards/100g
2-3 stitches per inch on US 11-15 needles
SRP $14
Find it at WEBS.
And finally there’s Outer, a quick-knitting bulky blend of superwash wool and organic cotton. Again, the cotton really does feel like the majority fiber here even though it has even less cotton, by weight, than Sweater does. 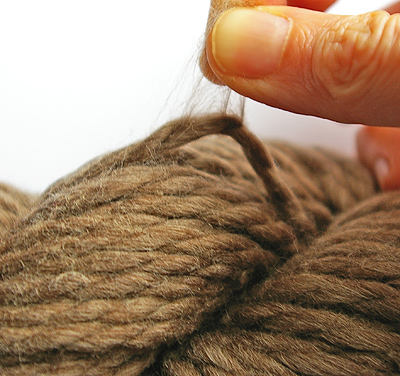 Outer is composed of two strands of loosely twisted fibers that are, in turn, plied together. This technique produces a wonderfully soft and lofty yarn. You’ll want to be careful about what you knit with this, because the amount of twist isn’t quite enough to keep a tight hold on those fibers. Pinch the surface of the skein and you can easily pull out a clump of fibers. Simply keep your gauge on the tight side, and, for large projects where weight and wear are really a concern, seek patterns that include combinations of knit and purl stitches to give the fabric more structure (such as Spud & Chloë’s own Sidecar Jacket).

The excitement around Spud & Chloë is palpable and well deserved. The yarns, though relatively common in look and feel, each have something a little different from the norm—the dusting of silk and multiple-ply composition in Fine, and the marriage of wool and organic cotton in Sweater and Outer, which will make warm-weather knitters extremely happy.

The patterns are fresh and fun, and the way in which they’re packaged is sheer marketing genius. And best of all, Blue Sky Fibers gets to keep its own brand intact while still exploring other fibers and creative concepts.

On a broader scale, the excitement around Spud & Chloë represents a renewed sense of optimism within a market that has taken a few bad blows over the last couple years and is ready to see the sun again.