When I first laid eyes on this book, I thought, “Ugh, not another ‘hip’ knitting book.” I didn’t even give it another glance for several days, which was a big mistake. When I finally did return to the book, I quickly rearranged my editorial schedule so I could publish a review of it as quickly as possible. 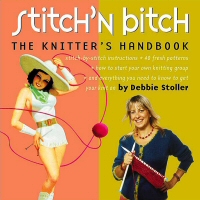 Debbie Stoller’s first knitting-themed book is cute, funny at times, deeply sincere at others, and—occasional over-hipness aside—extremely well-written. Stoller’s voice and personality permeate the first half of the book, but she steps aside completely when it comes time for the patterns—something Lily Chin was criticized for not doing in Urban Knitter.

Judging a Book by its Cover… or Not

Beneath the hip, candycane surface lies a very intelligent work. Stoller has a powerful list of credentials to her credit—she is co-founder, co-publisher, and editor-in-chief of BUST magazine, and she holds a Ph.D. from Yale University in the psychology of women.

A new knitter she is not, as you discover at the beginning of the book. She describes watching her grandmother, great aunts, mother, and aunts knit as a child, describing their “focused air of self-containment, an earthly solidity.”

Stoller then details her own journey into the world of feminism and women’s lib, the inner conflict she felt between her feminist principles and that strange, undeniable knitting itch she’d get in her hands.

When she finally re-connects with knitting, it’s a beautiful moment. “Slowly,” she writes, “like some sort of sense memory, my hands began casting on stitches with a deftness and agility I didn’t even know they had.”

Her Field Guide to Knitters is another potentially painful section that breaks the knitting community down into six categories. She describes “old-school knitters” as those who use only antiquated patterns, aluminum needles, and orange, green, and brown acrylics; “holier-than-thou” knitters, on the other hand, turn up their noses at knitting trends and “prefer those times when knitting has fallen out of fashion.” The attempt at humor may cut a little bit too close to the bone for some.

But all was forgiven and my respect for Stoller cemented when I read her discussion of advanced color knitting. “You see them every winter,” she writes, “Women of a certain age sporting cheery hand-knit cardigans with snowflakes circling the collar, or bright green sweaters with a giant, smiling reindeer on the back. Well, the next time you see one of these ladies, you should rush right up and congratulate her, or at least give her a high five, because knitting designs into a sweater like that is damn hard work.” I couldn’t agree more.

The book’s knitting instruction section is thorough, well-illustrated, and written in the conversational tone of a dear friend sitting right by your side, explaining the entire world of knitting to you in one sitting.

With a few exceptions, the patterns are all written by what I’d call the “new regime” of knitters—self-taught, independent spirits who tried things their own way before anyone had a chance to tell them they shouldn’t.

Many learned to knit, or returned to knitting, in the past five years; and many have online presences through Web sites and blogs. By day, they’re everything from astrologers to tattoo artists to professional knitwear designers.

Patterns begin with a sweet introduction by the designer, a photograph of the item being modeled in a casual pose, a list of the skills required to complete the project (and the page numbers where you can brush up on each skill), plus schematics showing the outlines and measurements of each piece. At the end you have a small photograph and brief autobiographical statement by the designer.

Stoller has managed to assemble a respectable variety of items and styles in the book’s 40 patterns—wrist warmers, totes, a backpack, cell phone cozy, hats and scarves galore, plus sweaters, a charming cat bed, and even a fabric tote and needle case. Some will be extremely obvious for anyone except the rank beginner. But from a technical perspective, they’re all extremely well done.

Patterns carry such whimsical titles as the Ribbed for Her Pleasure scarf, the Queen of Hearts and Wonder Woman bikinis, and the Cowl and Howl sweater set (one for a dog, the other for its owner).

My favorite is Annie Modesitt’s Pinup Girl sweater. In the introduction, Annie writes, “I’m really tall, but I love short things—my kids, my car, my husband.” (I saw all three this summer, and it’s true!) Annie uses short rows and ribbing to make a curvaceous, sexy but demure empire-waste top out of Classic Elite Lush.

Speaking of yarns, that’s another refreshing thing about this book: The designers (and publisher) have no clear vendor affiliations. So each designer has been truly free to specify the yarn of her choice.

You’ll see everything from Lion Brand to Rowan to Katia to one of my favorites, Halcyon Yarn’s Victorian Brushed Mohair hand-dyed with Kool-Aid.

If one book were to embody the knitting revolution of the past few years, this is it. The list of recommended magazines is a perfect example of why: Stoller artfully avoids any mention of Knitter’s Magazine, Cast-On, and others often associated with old-school knitting. Instead, the voice, the content, and the patterns are all distinctly “today.”

But where knitting is concerned, Stoller is quick to give credit where credit is due.

“In an age when so many of us sit in front of computers all day long,” she writes, “we may feel the desire to create, to touch, to make something tactile with our hands. And in these uncertain, anxious times, warm handmade scarves and cozy sweaters feel protective and comforting. Of course, this last discovery we can’t claim for ourselves—it’s something our grandmothers have always known.”