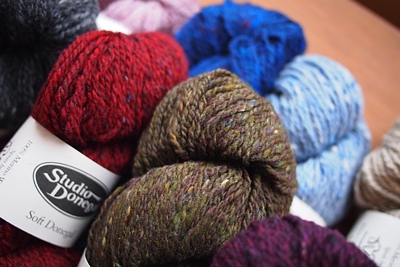 What’s in a name?

Say “Donegal” and most knitters think of that robust, hearty stuff from County Donegal, spun on a spinning mule and peppered with colorful flecks of tweed. Soft Donegal is still made in County Donegal on a mule and peppered with those colorful flecks of tweed. But instead of the robust local wools, Soft Donegal is made from super-soft imported Australian Merino.

My question: Is a Donegal really a Donegal if it doesn’t feature those robust local wools? Or is it like the blue cheese from Oregon that tastes like Roquefort but has to be named something else because it didn’t originate in the famous Combalou caves of Roquefort-sur-Soulzon. And I suppose the bigger question: Does it really matter? 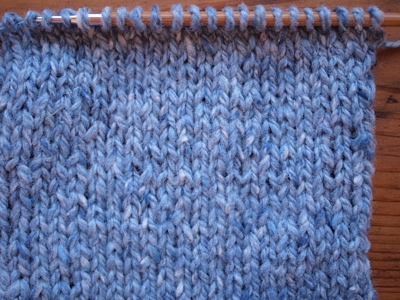 I received several sample skeins in different colors and wound them into skeins, encountering nary a knot or snag. I chose a light blue for swatching so that you could see the stitches clearly.

Instead of the telltale “hearty” hand of traditional Donegal tweeds, Soft Donegal has the soft, almost dry or papery hand you sometimes find with finewools. It almost feels like cotton.

Knitting was swift and easy. My stitches were mostly even, with just an occasional wobble. Only once did my needle knit just one of the two plies and leave the other dangling.

While the yarn held my fingers comfortably, it didn’t have excessively spongy elasticity to it. Although Merino is considered a high-crimp finewool, the yarn itself felt a muted in a way that suggested residual spinning oils. You’ll often find this in yarns whose fibers were dyed and blended prior to spinning, which is when the oil is sprayed on the fibers. (Dye the yarn after spinning and you’ll likely rinse off much of the oil.) I suspected the swatch would liven up significantly after being washed. 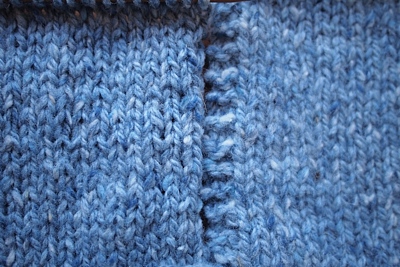 Sure enough, I dropped my swatch into a big bowl of warm sudsy water and gave it a good tap. Soon it was completely submerged, meeting my gentle squeezes with a spongy but willing resistance. The wash water showed just a vague hint of blue; it rinsed clear immediately.

Out of the water and onto a towel it went, and I could immediately see a difference. The slightly uptight, occasionally wobbly stitches had smoothed into a soft, perfectly even piece of fabric with a delightful bloom along the surface. (Unwashed at left, washed at right.) 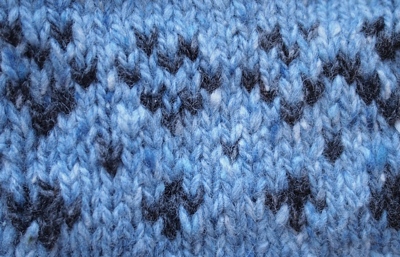 The bloom is especially attractive for colorwork, easing any uneven tension or puckering between your stranded colors and making you feel quite confident indeed.

In terms of gauge, despite the significant relaxation and bloom I couldn’t measure any difference in stitch width or height.

Here’s probably the only area where the “non-Donegalness” of this yarn becomes apparent. The fibers from sheep that traditionally thrive in this region tend to be far stronger and more well-wearing, but at a price of next-to-skin softness.

Merino, on the other hand, has all the next-to-skin softness we crave. Its fiber diameter is extremely fine, and the finer a fiber’s diameter, the more likely it’ll bend when it touches your skin, avoiding irritating your skin receptors and producing what we identify as a prickle. But, alas, the finer a fiber’s diameter, the more vulnerable it is to breakage and abrasion. As the fiber’s diameter increases, so does its ability to resist abrasion—but so does its insistence on standing up and poking those skin receptors head-on.

Initial abrasion caused two flecks of tweed to escape from the fabric surface. Further abrasion brought out the ends of a few more flecks of tweed, but the increasing halo acted to hold them within the fabric. What pill-like clumps did appear were fairly well-hidden by the fabric’s overall fuzzy jumble. I had to hold the swatches fairly close and under a bright light to get a good look.

I can imagine some knitters, especially those with sensitive skin, will be overjoyed to know they can finally knit themselves a tweedy Irish woolen in something soft. At the same time, I can imagine other knitters feeling betrayed that Australian Merino should enter these hallowed Irish mills.

The bottom line is this: It’s our own insatiable appetite for softness that led to this yarn. If we weren’t constantly asking for it, they wouldn’t have made it. 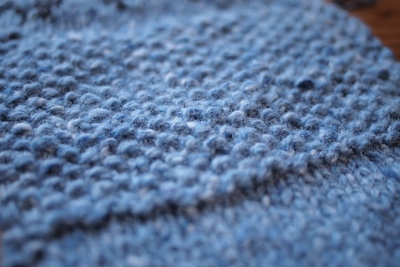 There’s a lot to like. If you want to try colorwork and want it to look good on your first try, this would be a great candidate. If you’re a fan of seed stitch, Soft Donegal renders it exquisitely. While I missed the crunch and spunk of rougher fibers, I was surprised at how nicely Soft Donegal washed and wore.

The yarn produces a soft, comfortable fabric that looks rustic but feels luxurious. It’s made at a small mill in Ireland by people who still care about producing quality textiles. (Visit the Studio Donegal Web site and you can see a video of the spinning mule in action.)