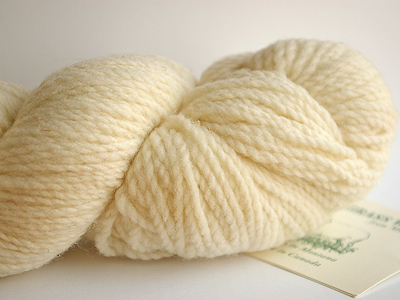 Two paths generally lead to Sweet Grass Wool. Along one, you’ll meet people who love hand-dyed yarns and are always looking for something new and unusual. And along the other path travel sheep geeks seeking to collect spun samples of every breed they can find. Come to think of it, a third road leads to Sweet Grass too, a shorter one for those who crave locally produced materials.

No matter how you get there, Sweet Grass Wool is a gem of a find. The Montana-based company is owned by Patti, a spinner, weaver, knitter, crocheter, and dyer. She bought Sweet Grass Wool in 2005 after retiring from a 37-year career with the local phone company. Her love of fiber is decades old. “I learned to spin in the early ’80s,” she told me, “and dyeing came not long after that. At first it was fleeces, then the yarns, then painting yarn, and you can see where this went.”

Each year, Patti buys the entire clip of white Targhee fleece from a local Montana grower. She sends it across the border to a mill in Canada where it is spun as singles, sock yarn, two-ply, three-ply, and in a Targhee/Mohair blend. She then hand-dyes this yarn in intensely saturated variegated and semisolid colors, which she sells on her Web site, in her retail store, and at most major West Coast fiber festivals.

Patti also offers her yarn in a pure, undyed, straight-off-the-sheep white. For this review, I chose the undyed white two-ply.

Targhee is one of the newer sheep breeds in existence, having been developed in the 1920s at the U.S. Sheep Experiment Station in Dubois, Idaho. Genetically speaking, it contains 3/4 finewool blood and 1/4 longwool blood—the former coming from Rambouillet and the latter from Lincoln and Corriedale. Later, some Columbia was also added to the mix (Columbia itself being a cross between Rambouillet and Lincoln).

If all those breed names put you to sleep, just know that Targhee fibers have a foundation of relative softness and bounce (thanks to those finewool genes); but they also have a decent staple length and strength (thanks to the longwool genes). They spin up into a dense, extraordinarily doughy material that begs to be squeezed.

As soon as I began swatching, I noticed that my yarn’s two plies were pitched in a heated battle for independence from one another. If you look closely at the knitted swatch, you can see this battle taking place on my needles. Instead of one cohesive plied yarn, you’ll see two finer plies standing side by side, pretending to ignore one another.

Such is actually a common trait of two-ply yarns. Three plies love to nest into one another, but two plies are always pushing away from one another. Their battle plays itself out in the knitted fabric by producing a slightly pebbly surface. Such characteristics don’t make this any lesser of a yarn, but it’s definitely something for you to know.

If you want an eyes-closed knitting experience and a completely smooth fabric devoid of ply shadows, you may want to stick with the singles or the three-ply version. The few times I tried to knit by touch alone, I inevitably snagged just one of the two plies and didn’t discover its dangling companion until several rows later. 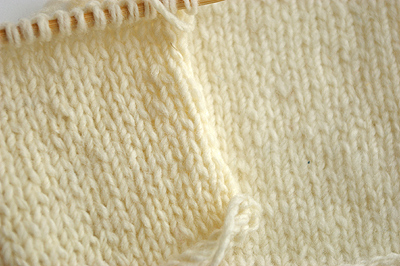 My swatches didn’t surrender immediately to their warm, sudsy bath. They sat on top of the water like trusty little lifeboats until, finally, my hands plunged them to the bottom of the bowl. After gently squeezing them several times to make sure the warm water had penetrated all the nooks and crannies, I let the swatches sit for several minutes.

My hope was that the highly elastic fibers would finally let go and relax—which they did. While it still had a little lumpiness to it, the resulting fabric had bloomed even beyond my expectations, producing a much smoother, more even fabric with fantastic cohesion. You can see an unwashed swatch at left, and a washed swatch at right.

The fabric did not bias, nor was there any change in stitch or row gauge.

Unless you have highly sensitive skin, you won’t feel any prickle from this yarn if you wear it right next to your skin. But beware: It has an inviting doughy quality that, rather like those rolls of Charmin in the old commercials, might invite strangers to give you a squeeze.

Although the fully bloomed fabric had lots of tiny loose ends that could become enmeshed and form pills, they resisted doing so for quite a while. Only after sustained friction—and only upon close examination—did tiny wisps of pills become visible. They weren’t even pills in the classic sense of the term; they looked more like a second layer of fabric that was trying to establish itself right above the surface of the existing fabric.

The pills did not want to be pinched and pulled off, either. Thanks to the generous length of each Targhee fiber, most of the pills were very deeply rooted in the fabric and began to pull neighboring fibers out of place when tugged. Far better to snip off any pills (should they eventually appear) with a fabric shaver.

This is a fantastic sweater yarn. It’s not as super-soft as a pure finewool such as Merino, but it’s not as delicate either (and I’m using delicate as a code-word for “pilly”).

The yarn produces a welcoming fabric that you can wear every day. It’ll give extraordinary elasticity to ribbing while also rendering well-sculpted cables and stitchwork. Although the yarn is somewhat dense, it still holds a good amount of air, which will give the resulting fabric a good amount of insulation.

And you can’t beat the price at $13 per 220-yard undyed skein and a mere $2 more for a hand-dyed skein of the same yardage. With a little tweaking to get gauge, you could use this yarn for a scrumptious Allegan Cardigan. A medium-sized one of those would require 1,100 yards or five skeins. Undyed, we’re talking $65; dyed, $80. For a squishy, well-wearing slice of the great North American west, that’s a bargain.