The Age of Homespun: Objects and Stories in the Creation of an American Myth 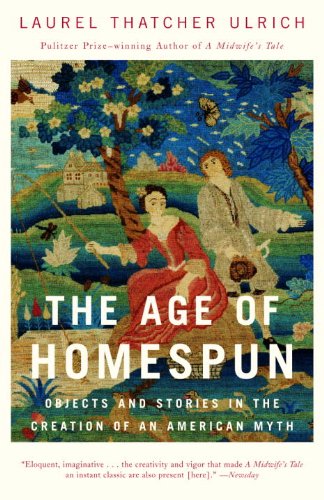 For most people, the practice of spinning, weaving, and knitting are a luxury rather than a necessity. But during Colonial American times, the home-based making and selling of textiles played a key role in establishing political independence and cultural identity.

A Clearer Look at History

This book is divided into 11 chapters. Each attempts to trace the provenance of an ordinary household item from Colonial American times.

The items include an Indian basket, a spinning wheel, a chimney piece, a cupboard, a niddy noddy, bed coverings, silk embroidery, a pocketbook, a linen tablecloth, a coverlet, a rose blanket, and, finally, an unfinished knitted stocking.

As you can guess from the nature of these objects, the stories have a decidedly feminine nature.

Every Object Tells a Story

Although this is a history book, it is by no means dry or academic. Ulrich has a gift for presenting research such that it’s almost impossible to stop reading.

Like a detective, she tracks down detailed facts about the people who came into contact with each object. You get a feel for what those people’s daily lives were like, their worries, their fears, their annoyances, and their amusements.

It’s a highly personal approach to the telling of history, based not as much on major historical events as on the quiet details of everyday life. As Ulrich puts it, “To study the flow of common life is to discover the electricity of history.”

The book takes its title from a famous speech made by the Reverend Horace Bushnell in 1851, in which he praised an innocent rural economy sustained by the homespun.

At that time, the nation was swept up in a Colonial revivial, which brought with it a romanticized retelling of Colonial history in which women’s domestic lives were blissfully simple and productive.

Step by step, Ulrich sheds more light on these myths. The goal isn’t always to debunk them, but rather to paint a more honest picture of life for the women who practiced these crafts. In the process, she shows how the economy of this women-based domestic production provided a foundation for American independence.

I encourage you to read this exceptional book. Besides the fact that it’s a great read and makes history come alive, it tells the seldom-told story of how the fiber arts evolved as a distinctly women’s industry, and, for once, shows how fundamental they were to the nation’s development. The book also makes clear the ingenious resourcefulness and hard work of women in earlier centuries.