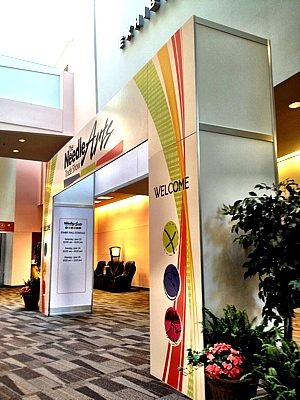 Twice a year, knitting industry folks get together to network, take classes, and do business at a show called TNNA. They bring the latest and greatest samples and prototypes and skeins so freshly dyed they’re still slightly wet to the touch.

Some authors see their book for the very first time, cracking open the FedEx boxes right there on the show floor. Others block their last few samples on the hotel bed the night before. It’s quite a production.

The goal? Behind the smiles and the hugs and the late-night sprawl in the Hyatt’s upper lobby, people are there to do business.

I have no booth, nothing to buy and nothing to sell. From June 23-25, 2012, I wandered the show floor to get a pulse on the industry—to meet people, strengthen friendships, put faces behind skeins, and to read the clouds to see what kind of weather is headed our way.

After all these years (this was my 13th TNNA) it almost feels like a high-school reunion, with teachers and mentors and colleagues alike, a few exes thrown in for good measure, and the ever-present North Market serving as our cafeteria. Yet TNNA always surprises.

Photography on the show floor is strictly prohibited, though these days the rule is an optimistic gesture at best. Still, I took no pictures. 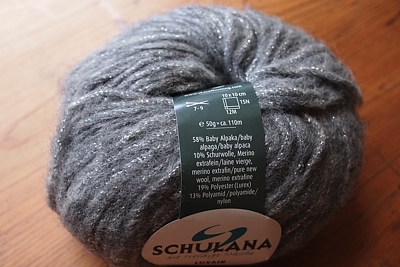 “I’m sure you know,” more than one yarn rep told me, “that novelty is back.” And indeed, it is.

For knitters who remember the novelty yarn crash, this is a bitter pill to swallow. What makes it slightly easier this time around is the higher percentage of natural fibers. Whereas the earlier novelties were 100% synthetics of one sort or another, the newer novelties are seeing bits of baby alpaca, mohair, Merino, and cotton slip in.

Off the record, one vendor showed me an old-school synthetic novelty yarn they’d tried to introduce and said it wasn’t selling nearly as well as the one with more natural fibers in it. Natural selection is doing its job in the yarn world.

Along with the frizz and fuzz and lumpy textures was sparkle. Lots and lots of sparkle. Some was your basic smooth metallic material, as in the Schulana Luxair shown above, which contains 58% baby alpaca, 10% extrafine Merino, 19% polyester, and 13% nylon. Others had actual sequins of varying shapes and colors. Toward this end, Tahki Stacy Charles showed me a particularly gorgeous glittery yarn that reminded me of the city lights of Tucson at dusk. (I’ll tell you more about this one when the yarn arrives.) Back in the pure synthetic realm, Aslan Trends turned a few heads with its sparkly “fantasy” novelty called Litoral. 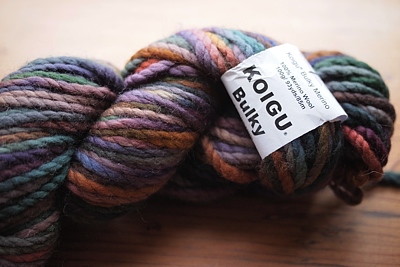 Besides the continued creep of novelty yarn, the other real story at TNNA was color. Hand-dyers were in greater abundance than ever, folks like Zen Yarn Garden, Sweet Georgia Yarns, Anzula, Baah Yarns, and Madelinetosh, who was reportedly taking new accounts at the show for the first time in quite a while. I was excited to see LobsterPot Yarns exhibiting at the show for the first time, even though they’ve been around for years.

Most of the established players were there too, including Prism, Lorna’s Laces, Alchemy Yarns, Claudia, Fiesta, Mountain Colors, and Koigu, which premiered its much-anticipated Bulky (shown above).

For yarn stores, the influx of hand-dyers poses a challenge since many of the dyers use the same or very similar yarn bases. An LYS can’t carry six different versions of the same worsted-weight three-ply Merino/cashmere/silk blend, no matter how different the colors. Most end up choosing just one or two dyers and using them for their whole range.

One hand-dyer to buck this trend was newcomer Sincere Sheep, whose naturally dyed breed-specific yarns are worth carrying on their own merit—ditto the fabulous North American Shetland yarn from Elemental Affects. Even Tahki Stacy Charles was previewing a new yarn sourced and spun entirely in New York State—more on that later, too.

Something I’m not talking about much here is the rise of designers at TNNA. When I first began covering the show, nearly all the booths were populated with yarn companies, tool manufacturers, accessory makers, and big-name publishers.

Today, an increasing number of booths are being taken by individual designers. No longer do they quietly toil, selling their patterns to yarn companies to be published anonymously. Their success is significant enough for them to afford a booth—one can run in the thousands if you include travel and furniture—which is no small feat for someone whose product sells on average for just $6 apiece.

Ysolda Teague outdid herself at this show, having constructed a veritable house for her booth, complete with curtained windows and a red bicycle parked out front—on which Cat Bordhi was spotted riding up and down the aisles.

It’s an interesting trend at a time when many yarn stores are grappling with whether to carry printed patterns at all. Several shop owners told me their leaflet collection was just gathering dust, since so many more customers prefered to buy digital patterns online. And still, Unicorn Books had one of its most successful days in its TNNA history. Long live printed books! [Sadly, as of 2016 Unicorn Books is no more.] 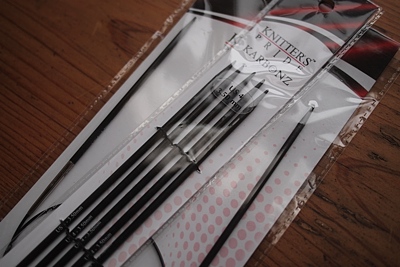 The big news in the needle arena was Knitter’s Pride, whose key staff traveled from India to make their TNNA debut. They had their full line on display—the plastic needles and bamboo needles, the solid birch and the colorful densified laminated birch, the nickel-plated brass needles, and Karbonz, the newest addition (shown above), made of carbon fiber. They’re available in the full line-up of DPNs, fixed circulars, interchangeable circulars, and single-pointed straights. The US US00000 (1mm) seemed as fine as a mechanical-pencil lead and yet you could bend it without snapping.

Knitter’s Pride is also testing a new, more eco-friendly nickel-free needle in the Europe market. If it does well, we can hope to see it in the U.S. soon.

Part of the game at every TNNA involves asking people how they’re doing at the show. In my 13 TNNAs I’ve never gotten a consistent answer. Some vendors will always insist it’s their best show yet. Others shake their heads and hope it isn’t just them. To me, the show seemed quiet.