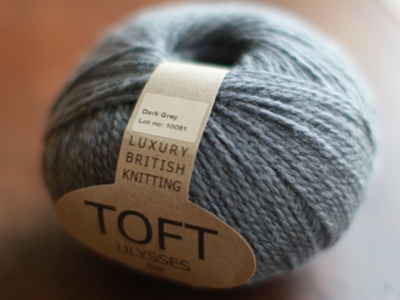 At the 2010 Knit Nation market in London, the British yarn scene was just beginning to expand from big brands to smaller, more local producers. John Arbon Textiles had skeins of British wool spun at their own mill, and Renaissance Dyeing had French wool they’d sourced and naturally dyed by hand. But otherwise, the excitement was still primarily in the realm of hand-dyers.

But that same year, the Prince of Wales launched an ambitious Campaign for Wool, still ongoing, which has helped to transform not only wool but yarn in the UK.

Where just four years ago people told me it was nearly impossible to find domestically sourced and spun wool, now you can. And not from one company, but several—with more entering the fray every year.

The Toft Alpaca Stud farm was established in 2006 and is located about two hours northwest of London. Kerry Lord grew up on the farm, went off to college, but eventually heeded the call to return home to the farm. Her mission? To help her family establish a second business that would make use of all the glorious fiber that their prized animals grew.

They collected the alpaca fiber and had it spun into yarn at a British mill. Local handknitters created finished objects out of the yarn, charming things like baby blankets and stuffed elephants. Then came the yarn itself, which expanded beyond just alpaca to include the Ulysses wool line. It comes in DK and chunky weights. This review focuses on the DK weight. 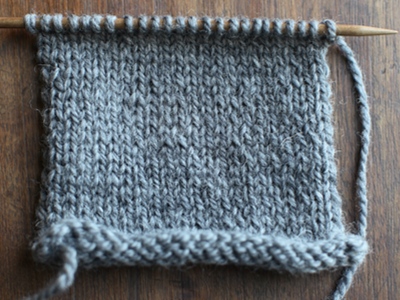 The skein feels dense and substantial in your hands. But unwind a strand and play with it, and you’ll discover that this yarn is more air than substance. I mean that in a good way. It looks like a worsted-weight, but hold the yarn taut and it slims down to a DK—which it is.

Ulysses DK is a relaxed, well-balanced two-ply wool yarn. The loft and crimp of the fibers helps conceal the ply structure and make the yarn appear perfectly round and smooth.

The label has no recommended needle size, so I chose a US 6 (4mm) needle. I started with a pair of rather pointy-tipped wooden needles, but the tips kept snagging the stray poof in the yarn. I switched to a blunt-tipped pair of Addi Turbos. After a while, the snagging stopped and my pace increased. The wool has enough grab to hold the slick Addi surface tight.

Knitting was comfortable, the yarn soft, stretchy, and gentle on my hands. Maintaining tension wasn’t a challenge. Dropped stitches slithered down a few rows before I could catch them, but they willingly allowed me to rescue them and pull them back up.

My stockinette looked a little wobbly, which I attribute to the two-ply construction.

The swatch was quick to relax in in its warm soapy bath, but it never lost its core cohesion. It left a vague milky poof in the wash bowl, lingering lanolin and spinning oil, I presume.

Washing had relaxed and evened-out my wonky stockinette beautifully, leaving a gentle halo across the fabric surface. In terms of gauge, the washed swatch blocked to a pretty even 5 stitches per inch. Unwashed, the gauge was a tad tighter (near but not quite a quarter stitch per inch), so you’ll want to swatch and wash your swatch before embarking on any full-sized garments.

From a touch perspective, this is a wonderfully soft yarn. It’s a blend of different British wools, which gives it more depth and nuance than would a straightforward skein of Merino. Every once in a while I stumbled across a fine white chalky fiber, which is kemp—something you see often in the heartier British breeds. Yet there’s also a softness and a hint of slink that almost made me wonder if they’d snuck some alpaca in there. Twice I encountered a small clump of white fibers, most likely neps from the finer fibers in the blend, produced during carding.

From a touch perspective, I felt no prickle whatsoever.

From a wearability perspective, I have good news and bad news. The good news is that the fabric retained marvelous bounce. The bad new? This isn’t a yarn for soccer team jerseys. Nor is it even suitable, I think, for socks. Those two relaxed, poofy plies aren’t nearly enough to hold up under serious duress or abrasion. Moderate simulated abrasion caused poofs of fiber to appear on the fabric surface. Eventually, they became pills. It’s the same old compromise. You want soft and airy? It’s gonna pill.

That said, I still think Ulysses DK is a perfect wool for warmer-weather, next-to-skin knits. It produces a thin yet still invitingly poofy fabric. Just make sure to keep your gauge on the tight side, and don’t be afraid of combining knits and purls to help with fabric cohesion.

On the skein, Toft Ulysses DK is so pure, squishy, soft, and inviting that I almost didn’t want to pop off the label and start knitting. It embodies everything I love about wool, and it’s a fine (literally and figuratively) wool choice for the warmer knitting months. I should note that the Chunky is even more enticing than the DK, with six plies that produce a much more rounded, durable yarn.

For the U.S. market, I fear Ulysses DK may be a victim of the tight exchange rate between British Pounds and US Dollars. One skein of this yarn costs 18 Pounds, about the same price for decent jumper cables, three bottles of fountain pen ink, or a pair of women’s Crocs. No matter how compelling the story, most of us do have our limits.

But this isn’t about the American market. It’s about an uptick in local markets around the world, ones that support local suppliers, producers, and consumers. You’ll find Toft yarns at their farm store, and you can also find them at Loop London and Baa Ram Ewe—two shops that support their community and make for memorable pilgrimages should you venture abroad.