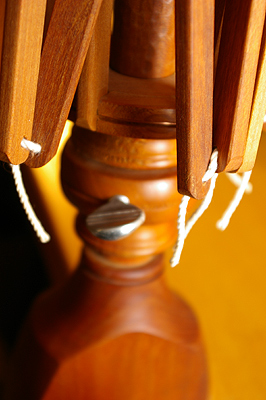 In the universal lexicon of hand gestures, if you stand in front of a knitter and hold out your arms, with your palms facing one another, you’ve just offered to hold that person’s hank of yarn while he or she winds it into a ball.

For hundreds of years, our early domestic tasks often included holding a skein of yarn in outstretched arms while our mothers, sisters, or aunts expertly wound the yarn into a ball. If a gentleman suitor was willing to hold skeins for his beloved, marital bliss was almost guaranteed.

But today’s picture has changed to one of greater solitude, with busy schedules and not-so-willing suitors. Some knitters resort to draping yarn between chairbacks, an often flawed approach. Others simply lay the skein on the floor and patiently rotate themselves around it, stopping repeatedly to disentangle the yarn. When I have time, I confess a preference for setting the skein on my lap and slowly, tenderly winding each yard by hand—it’s a quiet, intimate way to get to know my yarn.

But we don’t always have a lot of time. And some skeins can hold more yarn than you’d ever want to manage by hand. A far better solution is the umbrella swift, an ingenious little device for holding skeins under tension so you can unravel them and easily wrap your yarn into balls.

There are several types of swifts. The most popular one works much like the inner workings of an umbrella, hence its name, the umbrella swift.

A center pole clamps onto a table. The pole holds several crisscrossed arms (usually between 5 and 8) that sit flush to the pole, like an umbrella. 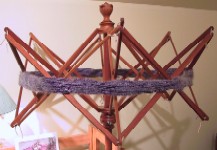 As you push up the pole from the bottom, the arms slowly extend outwards. The entire umbrella mechanism floats on the pole, so that it can spin freely as you unwind the skein and wind your ball.

Most umbrella swifts on the market today are infinitely adjustable to hold a skein of any circumference. Once you’ve reached your desired size, just tighten a screw and the swift is secured.

Older ones lacked screw-secure mechanics. Instead, there were several holes drilled in the center pole at regular intervals. When you’d raise the swift to the desired size, you’d secure a peg into the closest hole to keep the arms from collapsing.

Swifts were used almost exclusively for homespun yarn in those days. The spinner wound the skein on her niddy noddy, then transferred it to the swift, which guaranteed that the skeins would always be of the same size.

There was little need to be able to adjust your swift beyond one or two settings. But today, since we use skeins from all sorts of places, the ability to finely adjust your swift to any skein size is important.

While the umbrella swift is normally used after yarn has been skeined on a niddy noddy, some spinners prefer to wind their skeins directly from wheel to swift, skipping the niddy noddy entirely.

If you want to try this, remember to measure the length of yarn that’s used in one full rotation of the swift. Knowing this measurement lets you know how much yarn is in your skein by counting the strands in the skein and multiplying that number by the length of yarn in one rotation. Each time you use the swift, you’ll have to collapse it to get the yarn off and will lose the exact setting.

Keep in mind that the swift was designed for unraveling skeins rather than winding them, so there’s no easy way to hold and spin the swift. You’ll need to grab a spoke, spin, grab another, spin, and continue, rather like a slow-moving Wheel of Fortune. 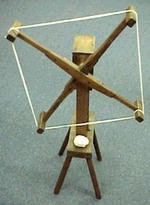 Skein winders and click reels (such as the one pictured at left) are much easier to operate for this purpose because they have a vertical rather than horizontal orientation. Many also have a wooden crank handle you can turn, which makes skeining large quantities of yarn much easier.

Skein winders and click reels don’t serve as umbrella swift replacements, though, because they usually do not have a flexible circumference. They are intended to help you make hanks, not unravel them. I’ve seen a few with movable pegs, but that still only gives you partial flexibility. Ultimately what you see is what you get.

Do You Need One?

Now that you know what an umbrella swift is, it’s time to ask the big question: Do you need one?

Not all yarns come in skeins. Some are offered in balls that you can knit from the outside or from the center. I was told by one yarn company owner that balled yarns cost more than skeined ones—something about equipment and labor. I don’t know if this is widely true, but I do know that balls and skeins are enjoying a much more even balance on the shelves of my LYS. Which means more swiftworthy skeins than ever before.

But again, what types of yarns do you most commonly use? Do your favorites always come in pre-wound balls? Look through your stash to see how many skeins you have that don’t need to be wound. Or go into your yarn shop and peruse your favorite yarns. Do they come in skeins or ready-to-knit balls?

Keep in mind that many yarn stores will wind your skeins for you. Some will do it right then and there, others will ask you to return the next day. And I know a few yarn stores that make a winding station available to you—once you’ve purchased the yarn, of course.

The only drawback to winding your yarn in the store is that once you pop off that label and wind the skein into a ball, the sale is usually final. Returning a wound skein of yarn is like trying to return a toothbrush after you’ve pulled it out of its packaging.

I prefer to store my yarns in their original hank form, with the label securely attached. Balls and bands otherwise tend to get separated, leading to great mysteries and occasional woe during my stash dives.

Ultimately, however, the decision to swift or not to swift is more a personal one than a need-based one. Unlike exercise bicycles and rowing machines, umbrella swifts can be extremely beautiful objects, even when not in use.

If you love knitting, love the feeling you get when you have needles in your hands and yarn in your lap, I urge you to honor this love and start saving for a swift. If you don’t have an immediate need for it, trust me: Someday you will, and you’ll get great joy from being able to use it.

If you’re on a tight budget, keep an eye out for stray swifts at flea markets and second-hand shops, peruse eBay listings, or start putting pennies in a pickle jar.

are less expensive (selling in the $49 range) and often more lightweight. However, they can lack the warmer, more aesthetically pleasing pleasure of wood.

Among the simpler wood models

, prices range from $75 for the simpler bare woods (Leclerc, Glimakra, and Toika are three of the most prominent manufacturers) to $250 for a beautiful handcrafted Maine made cherry swift. I splurged on the latter 10 years ago and still get butterflies whenever I look at it.

Keep in mind that the bare-wood swifts tend to have rougher surfaces than the metal swifts or the Strauch swift, which has a marvelous hand-rubbed oil finish. Any snags would only happen when putting the skein on the swift, so roughness isn’t necessarily a critical shortcoming.

Other swifts you may see in antique shops and flea markets have arms that are entirely independent of one another rather than enmeshed in crisscrosses around the pole. The arms either extend out and have a little hook in the end, or they are made of two arms that, like collapsible drying racks, extend outwards in an accordion fashion.

Many older swifts that use the hole-and-peg technique to keep the swift in position have long since lost the peg. You can easily fashion a new one out of wood or another material.

Another common issue with older swifts is that the string or wire holding the arms together often wears out over time. If you see a swift in such a state, it is important to make sure all the arms are there (in some form or another). You can reattach them later.