I still remember my first mail-order yarn purchase. It was from a mythical warehouse-sized place in Western Massachusetts where people pushed around entire shopping carts full of yarns. The yarn store—called Webs—offered a “color book” with generous samples of all its house yarns for knitting and weaving. That beautiful binder was like a portable candy store for me.

Many years have passed since that first order. Hundreds of online stores and yarns later, I still have a soft spot in my heart for Webs. When I learned they were launching a new line of yarns under a separate Valley Yarns label, I knew I had to give them a closer look. 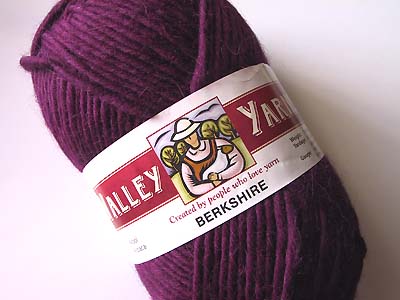 I looked at samples of their new offerings, and this rich wool/alpaca blend leapt out immediately. Berkshire looks rather basic on the skein, so what made me decide to review it? A few things.

Alpaca is denser and stronger than wool, but at 15% you have just enough to enjoy its sleek, lustrous qualities without the overpowering weight. Alpaca is a hollow fiber similar to angora, making it far warmer than wool—another reason a 15% blend shows intelligent restraint.

The wool portion of the blend feels reasonably soft (just one step down from merino) with medium staple length and enough crimp to give the yarn loft. Because a yarn’s warmth depends on its ability to capture and hold air, loft is good.

The second reason I chose Berkshire is the colors. It is currently available in 35 rich, saturated colors that immediately made me think of Icelandic-style sweaters—but so much softer. I’m always on the lookout for quality basic ingredients I can use to make memorable garments. The more colors I can choose from, the better.

For this review, I used the color Red Purple. 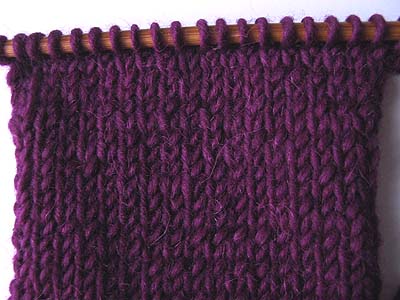 The yarn held together well on my needles. I chose Crystal Palace single-pointed bamboo needles, and their brief taper and moderately dull tip eased the threat of snagging. Progress was easy, and I was able to knit by touch alone after just a few rows.

The swatches did not bias, as often happens with single-ply yarns. I suspect the crimp in the wool fibers helped balance the ply. My stitches appeared smooth, even, and well defined.

Berkshire is yet another example of why, to really know a yarn, you must knit and wash a swatch of it. Fresh off the needles, my swatches felt somewhat tense and unfinished. But once washed and dried, they bloomed beautifully into a much softer and more fluid, cohesive fabric.

In warm water there was only a faint hint of bleeding, but my dried swatches showed no fading whatsoever. They needed no real blocking—I just placed them on a towel, adjusted the shape, blotted the moisture, and let them dry.

There was no change in gauge.

Loosely spun single yarns tend to pill under abrasion, simply because there’s less force holding all the fibers together. Yet Berkshire withstood a surprising amount of friction before breaking down.

This yarn would produce a beautiful felted fabric. Because alpaca fiber has fewer scales than wool, it takes longer to felt—which means that your garment will have a halo of loose alpaca fibers.

With wash, many ends of the alpaca fibers came loose from the fabric. Some were easily removed, others were firmly rooted in the fabric.

Because the alpaca fibers tended not to absorb dye as deeply as the wool, their lighter color gave the yarn a silvery halo effect that reminded me of Brown Sheep Lamb’s Pride (a wool blended with 15% mohair instead of alpaca).

Just as some wines need time to breathe after being uncorked, so does Berkshire need time to show its full potential. Once it was knit up and had a nice warm bath, it had reached its prime.

A medium-sized women’s pullover with some detail will require 1200 yards. That’s nine skeins, or just a hint under $60. That’s $0.035 per yard, which puts Berkshire right in line with the competition (which I see as Reynolds Lite Lopi, at $0.028 per yard, and Brown Sheep Lamb’s Pride, at $0.036 per yard). [Note: Those last numbers were calculated in 2005.] Not bad considering you’re getting 15% alpaca to boot.

Webs is known for offering a bulk discount on its yarns, which is 20% on a $60 yarn order and 25% on a $120 order. You’d need to order 10 skeins of Berkshire to get the discount, or augment your order with some other discountable yarns. [Note: In 2005, you would’ve had to order 13 skeins. So, although the total price has gone up, you reach the discount zone faster.]

Some people may take issue with the fact that this yarn is only available from Webs, while they’d rather support their LYS. I firmly believe in supporting local businesses, and I go out of my way to do so whenever possible.

But so small is our knitting world that I’ve come to believe supporting any knitting business—especially one with as long a history as Webs—can be a good thing. But the choice is ultimately yours.

Yarn name: Berkshire
Manufacturer: Valley Yarns
Fiber content: 85% wool, 15% alpaca
Gauge: 4 stitches per inch on US 9 needle
Average retail price: $4.99/ball [now $6.49 as of 2017]; Webs offers a discount on large orders of certain yarns, including this one. Deduct 20% on a $60 yarn order and 25% on a $120 order.
Where to buy online: Webs
Weight/yardage per skein: 100 g / approx. 141 yards
Country of origin: Peru
Manufacturer’s suggested wash method: Handwash. Dry flat, do not use a machine dryer.
Review date: 10/20/05
Color used in review: Red Purple (#21)
Wholesale distributor: None—this yarn is only available through Webs
Source of review yarn: This review was published a few years before I added this field, and to be brutally honest, I can’t remember where I got the yarn. While I’m pretty sure I bought this, because I’m not 100% certain, let’s say WEBS sent it to me.