Potter Craft and I, backed up by even more other people, went to great pains to make this the most perfect book possible. But as we know, perfection is often a fleeting notion.

The following errors have been discovered in the first printing of the Knitter’s Book of Yarn. Each grieves me more than I can possibly express. But at this point, there’s nothing to be done but list them all here, make sure every error gets corrected in the next printing, work hard to do even better the next time around—and humbly request your forgiveness.

With all my gratitude for your support and understanding

Inside front and back covers: On the gorgeous Fiber Family Tree, Modell should really be Modal. This change was made several times but somehow didn’t make it into the final file. Therefore, we must live with a fiber that sounds like a feminine protection product. “Modell…for women!” Also, there should be no “O” in Opossum. The Opossum is a rather unattractive rat-like animal that lives in North America, while the much-fluffier Possum is considered a pest in New Zealand and trapped for its fur—and that’s the animal we’re talking about here.

Page 37: For some reason known only to the gods and goddesses of editorial production, a close-up photograph of Fleece Artist Seasilk (shown larger a few pages later) was swapped where the photograph of DZined hand-dyed hemp/wool/mohair blend should have gone.

Page 91: The Baby Soft Cardigan was originally designed with a “boy” and “girl” version but my tech editor and I thought that might be a little overkill. We consolidated the pattern into one unisex version based on the “boy” version. Alas, what you see on the adorable child in the book is the girl version. So don’t be alarmed if the buttons and flap you see are in the opposite of what you’ll be knitting.

For the Small, cast on 36 sts, not 38. Thanks to the extremely patient Jessica for that one!

And for a more finished look, you can work a single crochet edging around the edges of the sweater after you’ve finished seaming it together.

Page 96: The header “Cardigan Schematic” should read “Shawl Schematic.” Unless you’re knitting the shawl as a cardigan, in which case, go us!

Page 107: No, I don’t think there is a size US 3.25 needle. The original needle sizes got swapped in production as we went back and forth on various other style-related issues. Instead of size 3.25 (3mm) dpns, you really want size 3 (3.25mm) needles. I’m sorry about that.

Page 115/117: A very helpful assembly diagram was omitted by the publisher. I think it’ll help you understand how all the pieces come together. 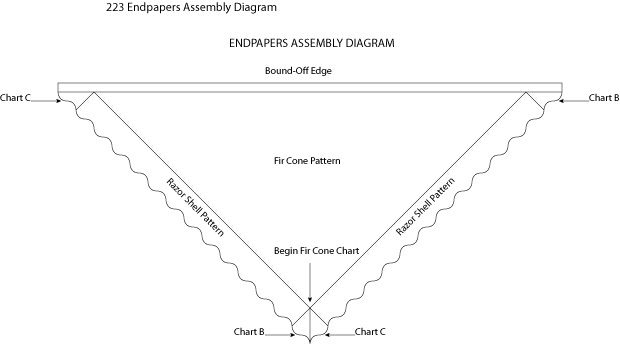 ALSO, on page 115 you’ll see a reference to Chart A. This is actually referring to the Razor Shell Pattern. I won’t bore you with the story behind this one (OK but only if we meet at a party) but I do apologize.

Page 153: In the Patchwork Carriage Blanket, the instructions for “Square 1: Stripes” should end, “Rep Rows 1 and 2.” Your blanket won’t self-destruct if you don’t work that last purl row but it’ll make your next row a heck of a lot easier. A tip of the hat to Heather for kindly pointing this out.

Page 176: The left thumb gusset of the Princess Mitts would be much happier knit using this revised thumb gusset chart.

Page 189: The Finished Measurements in the Butterfly Moebius should read width approx 24″ (60cm), height approx 10″ (25.5cm). The circumference of the piece will be twice its width. Susan, thank you for spotting this!

Page 195: In the Chunky Winter Set, the very first row of the Thumb Gussett Increase should read: K1, pm, m1, k1, m1, pm, knit to the end of rnd. There’s something about that first “pm” that seems to cause the “m1” to flee. My thanks to Debbie (currently on her 12th pair of Maine Morning Mitts) for pointing this out!

Page 200: In the instructions for Band 2 of the Architect’s Hat, line 5 should read, “Rep Band 1 (Rnds 1-6) once. You’ll get a perfectly lovely hat regardless of whether or not you make this change, but it’ll replicate the exact hat you see in the photograph. Thanks to Suzanne for spotting this one!

Page 203: Sometimes the most obvious things are the ones you miss. For whatever reason, this is what happened with the Diamonds and Pearls Shawl. In Notes, the stitch count jumps in row 33, not 31. Next, the very first row (Row 1) is missing a YO after the first stitch. It should read, “K1, YO, place marker (pm), k1, pm, YO, k1, pm, YO, k1, pm, YO, k1—9 sts.” Again, the case of the fleeing “yo.” Infinite thanks to the lovely Marie and Mari for pointing these out.

A lot of folks found the bind-off instructions for the Diamonds and Pearls shawl to be a little fussy, so here’s a step-by-step tutorial on exactly how it’s done.

At this point you slip that stitch (the same one you’ve re-knit a total of six times) back onto your left needle and knit it AND the next two stitches together. Then slip the first stitch on your RH needle (the one way back at the beginning, that’s just been sitting there all this time) over the stitch just worked (which was the k3tog) and off your needle.

And basically you’ll be repeating this process until you get to the middle, at which point she has slightly modified instructions so that the edging has a nice even split at the tip of the shawl. (The only difference is that you k2tog instead of k3tog.)

Page 215: In Row 10 of the Scaruffle pattern, it should say, “K1, knit into the front and back of each st to last st, k1—324 sts.” Many thanks to Karin, who may have majored in Spanish but has pretty darned good math! (Spoken like a true French major…)